Tesla Won’t Be the Only Trillion-Dollar EV Stock

InvestorPlace - Stock Market News, Stock Advice & Trading Tips Tesla at a trillion-dollar valuation has to be a bubble, right? Wrong. Here's why TSLA stock is just the beginning...

By Luke Lango October 27, 2021
This story originally appeared on InvestorPlace

Two days ago, Tesla (NASDAQ:TSLA) did something unthinkable – something that only four tech stocks in the history of capitalism have ever accomplished.

It became a trillion-dollar company.

It joined Alphabet (NASDAQ:GOOG), Apple (NASDAQ:AAPL), Amazon (NASDAQ:AMZN), and Microsoft (NASDAQ:MSFT) as the only U.S. companies to currently hold that distinction. Not only that, but Tesla cleared the trillion-dollar mark faster than any other company. 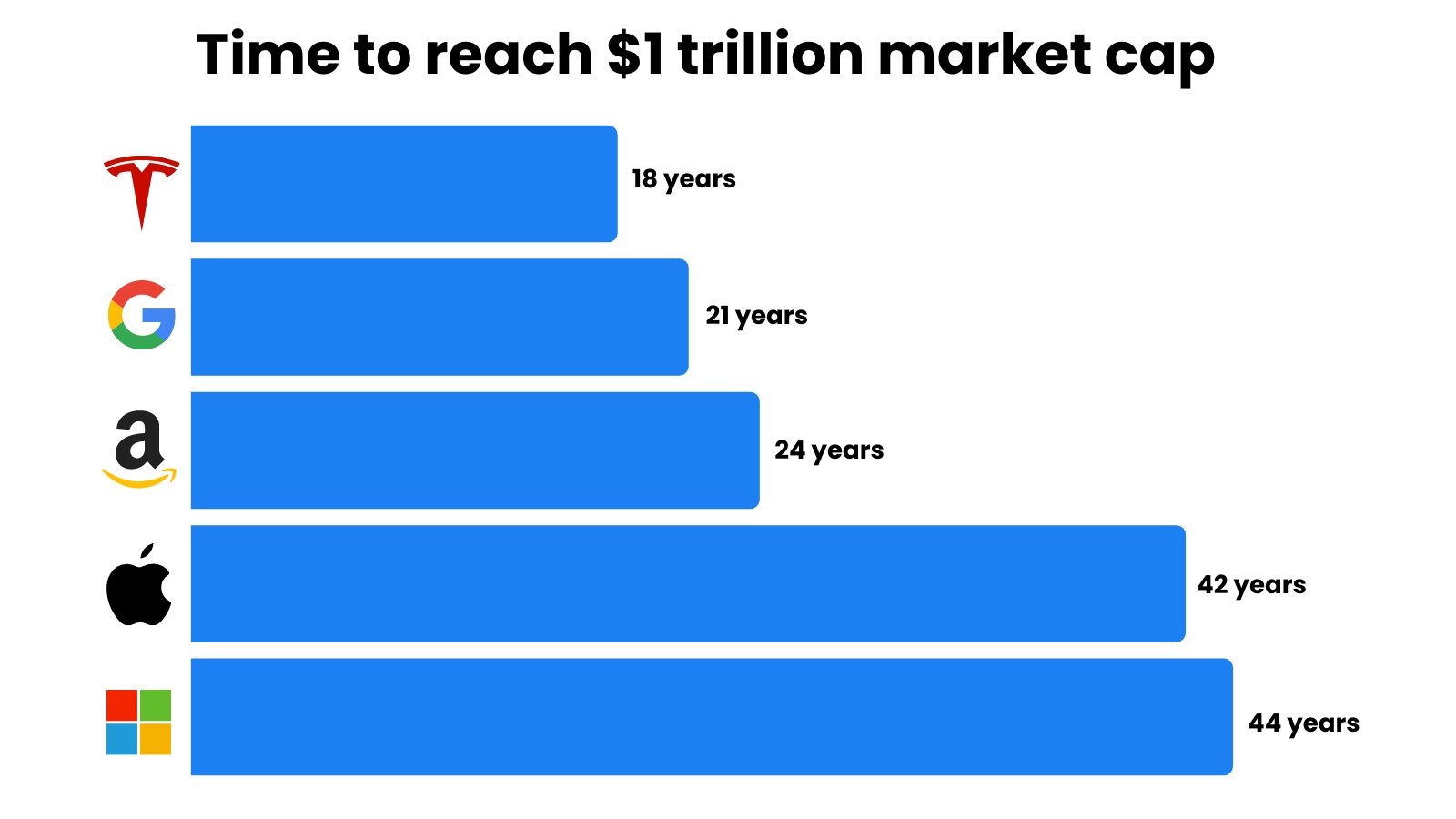 To a lot of folks, all of this just sounds silly.

That’s because, at a $1 trillion valuation, Tesla is now worth more than Toyota, Volkswagen, Daimler, General Motors, BMW, Ford, Stellantis, Volvo, Ferrari, Honda, and Hyundai combined – and most of those companies sold way more cars and recorded way bigger revenues than Tesla did last year.

So… Tesla at a trillion bucks… that has to be a bubble, right?

Because, last I checked, companies aren’t valued on how many cars they sell or how much revenue they rake in – they’re valued on profits. After all, to shareholders, how valuable is the sale of a $40,000 car if the automaker spent $40,000 to make, advertise, and sell the car?

It’s not valuable at all.

That’s the piece that Tesla bears are missing. Profits – not sales – matter, and Tesla is structurally and significantly more profitable than legacy automakers.

Let’s zoom out here. The reality is that, at scale, making an electric vehicle (EV) will be significantly cheaper than making a gas-powered car.

I know. That’s contrary to everything you’ve ever been told. And before you go pull up statistics showing me that EVs are more expensive to make than gas-powered cars today, let me tell you that the current EV production premium is exclusively because of the battery.

The battery comprises about 25% of an EV’s production costs. Strip out the battery and it’s way cheaper to make an EV than a gas-powered car, because there are way less parts.

With EVs, there’s no oxygen sensors, no spark plugs, no motor oil, no timing belts, etc.

The fewer parts you have, the cheaper it is to make.

So, the only thing keeping EV production costs higher than gas-car production costs is the battery – and those costs are plummeting. Between 2007 and 2020, the cost of EV battery packs has registered an average decline of 16% per year.

The more time goes on, the more battery costs go down, and the cheaper and cheaper it gets to make an EV.

Soon enough, battery costs won’t be a hurdle anymore. By that point – likely within the next decade – EVs will be significantly cheaper to make than gas-powered cars.

Not to mention, consumer demand is shifting toward EVs, so today’s prospective car buyers are willing to pay a premium for an electric car. That should result in higher sales prices for EVs, and reduce marketing costs for EV makers. Notice how Tesla hasn’t had to materially discount its cars, or how the company never runs any ads yet everyone still wants one?

Let’s put some numbers to this…

Your average automaker spends about 7% of revenues on sales and marketing, and another 5% on research and development. Tesla’s marketing spend rate is currently about 7%, and rapidly falling with an opportunity to hit 5% or lower at scale, while the R&D rate is already closing in on 4%. Lower operating expense (opex) rates? Check.

And that, in a nutshell, is why Tesla deserves its trillion-dollar valuation.

Elon Musk & Co. make about 9X more per car than other automakers, so TSLA deserves to be valued at about 9X your biggest legacy automaker, assuming Tesla can one day sell as many cars as that automaker (which we think is doable).

The biggest legacy automaker? Toyota. Its market capitalization? $240 billion. A 9X multiple on that is a $2-plus TRILLION potential valuation for Tesla one day.

This run isn’t over…

More importantly, though, the above “back-of-the-napkin math” is why Tesla won’t be the only trillion-dollar electric vehicle company.

Because Tesla won’t be the only company in the EV universe to benefit from economies of scale, lower production costs, and lower marketing costs. In fact, almost all pure EV makers will benefit from those dynamics, which means they will make about 9X as much profit per car sold as their legacy automakers at scale.

So what does that mean for you as an investor today?

Well, most EV stocks not named Tesla are worth less than $20 billion today.

That’s why – while we’re still bullish on Tesla – we’re much more bullish on other EV stocks whose best days are still ahead of them… stocks that we feel have 10X, 20X, even 30X upside potential.

That’s what we aim to uncover in our most exclusive investment research service, Early Stage Investor.

For readers who are unaware, Early Stage Investor is our small-cap investment advisory where we focus on investing in the world’s most innovative companies and game-changing technologies… while they’re still in their early stages… before they soar thousands of percent like Tesla.

Very recently, we just launched a brand-new portfolio in Early Stage Investor called the “4 EV Stocks for Financial Freedom” portfolio – and in that portfolio are the names of four EV stocks that we feel are best positioned to follow in Tesla’s footsteps, turn into giants of the future EV industry, and ultimately score shareholders enormous profits.

The best part? All four of those stocks are tiny and off the radar of most investors, so getting in now is like getting in on Tesla back in 2015… before Elon Musk was a household name, and before TSLA stock turned early shareholders into “Teslanaires.”

These stocks could do the same.

The only question that remains: Will you be one of them?

The post Tesla Won’t Be the Only Trillion-Dollar EV Stock appeared first on InvestorPlace.