InvestorPlace - Stock Market News, Stock Advice & Trading Tips Robinhood is hurting from a drop in crypto trading on its platform, and the resulting decline in revenue could push...

Robinhood (NASDAQ:HOOD) just posted a down quarter in terms of revenue growth and earnings compared to last quarter. Its crypto trading was a big portion of its revenue in Q2. Now, as seen in its latest earnings for the third quarter released on Oct. 26, crypto transactions fell dramatically. As a result, don’t expect HOOD stock to rise soon unless it becomes clear that crypto trading will rebound. 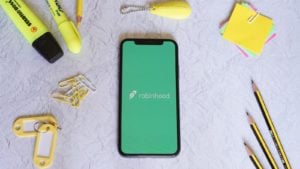 In fact, the stock started falling after the market close and the release of Robinhood’s earnings. On top of that, keep in mind that HOOD stock is well off the Aug. 4 highs it reached after going public.

Where This Leaves Robinhood Stock

During Q3, cryptocurrency transactions fell to just $51 million in revenue for Robinhood, down from $233 million in the prior quarter. In fact, total revenue fell from $565 million in Q2 to $365 million, a drop of $200 million.

As a result, the $182 million drop in crypto fee revenue accounted for the vast majority (91%) of that decrease in revenue. For example, I previously wrote that the drop in trading in Dogecoin (CCC:DOGE-USD) was likely responsible for much of that decrease.

As a result, Robinhood posted a loss of $84 million in adjusted EBITDA. In the prior quarter, adjusted EBITDA was positive $90 million. So this was was a huge $174 million swing, mainly as a result of the drop in crypto trading revenue.

But let’s think about this for a minute. Cryptocurrency prices have been rising in Q4. In fact, it looks like trading may be returning in the crypto market as a result of these higher prices.

Some exchanges are reporting higher volumes of paired trading in Bitcoin (CCC:BTC-USD) during October as a result of its higher price. In fact, as of Oct. 26, Bitcoin was at levels over $60,000 for 11 days in a row. This might augur well for the fourth-quarter trading volumes at Robinhood.

Where This Leaves HOOD Stock

That is more than $200 million lower than what analysts previously expected, and probably accounts for the huge drop during Q3. As a result, analysts have lowered their revenue forecasts to match the company’s expectations.

This could lead to forecasts of further net income losses this year and possibly next year. It could also delay the point in time when analysts expect the company to achieve profitability.

As if to throw gas on the fire, the company also described early lock-up releases of insider shares that can be sold as of Oct. 27. These additional shares flooding the market could dampen any potential upside in the stock for the time being.

Investors might want to hold off on buying shares until the stock has absorbed the lack of profits and revenue growth from the third quarter.

However, if trading in cryptos stays at an elevated level in Q4, I suspect HOOD stock will start to reflect that sooner rather than later. Until then, most cautious investors will likely wait for a lower price to pick up shares.

On the date of publication, Mark R. Hake did not own any security mentioned in this article either directly or indirectly. The opinions expressed in this article are those of the writer, subject to the InvestorPlace.com Publishing Guidelines.

The post Robinhood Will Take a Hit If Its Crypto Trading Revenue Doesn’t Rebound appeared first on InvestorPlace.

How to Maximize Your ‘Health Span’