By Josh Enomoto October 28, 2021
This story originally appeared on InvestorPlace

As prices for everything seem to only go in one direction (northbound), it’s only natural that much of the broader investment community’s attention has focused on cryptocurrencies. With their penchant for delivering double-digit gains — and in many cases losses — over a short time span, speculators new to cryptos have been pulled in with the allure of lifechanging riches.

So it’s perhaps a bit ironic that I’ve been cautious about cryptos considering that the sector has performed very well for me personally. Not that I’m the barometer of success, and while there have been many, many more people who have enjoyed astonishing profitability, I was more than happy to trade in digital promises for a mortgage-free lifestyle.

Trust me on this: if anyone knows the power of cryptos, it’s yours truly. Nevertheless, it’s also critically important that participants take stock of the present circumstances.

Mainly, it has to do with the most obvious of low-hanging fruit: what goes up must come down. Back during the dot-com bubble of the late 1990s to early 2000s, people bid up technology firms well above their intrinsic valuation. Indeed, many ventures were completely unprofitable, meaning that the internet bubble also coincided with unsustainable speculation toward initial public offerings. Frankly, that craziness aligns with what we’re seeing in cryptos today.

Over the past several weeks, I’ve mentioned that there were more than 12,000 digital assets trading. Today, I see 13,200 cryptos, which is a staggering number. At some point, you’re going to see consolidation because this magnitude of speculation cannot last indefinitely. While this is going on, investors have been piling into unprofitable companies over the trailing year-and-a-half period, just like the tech boom.

I want to reiterate that I’m not necessarily bearish on cryptos. However, I will keep pounding the table on this point: you’ve got to take something tangible out of your speculation. Yeah, you won’t feel great about missing out on more gains. At the same time, you don’t know what tomorrow will bring — and when you’re talking about virtual currencies, it could be steep losses.

Just based on common sense, investors should be extremely careful how they proceed. Here are the cryptos you should monitor, for better or for worse.

Cryptos for Your Radar: Bitcoin (BTC) 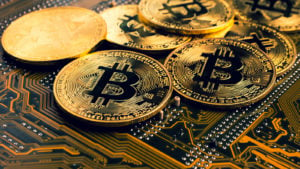 As the benchmark of all cryptos, whatever happens to Bitcoin eventually happens to most other digital assets lying downwind. Therefore, a Reuters report about the possibility of U.S. officials providing a clearer path for banks to provide virtual currency-related services for their clients should be interpreted as good news not only for Bitcoin but for altcoins in general.

However, it’s also possible that we’re hitting a mania with BTC that may not be viable without first incurring a correction to bleed out some of the intense wagering that has occurred in 2021. Again, I’m reminded about the lessons of the dot-com bubble. Yes, the internet is the future, but that didn’t mean regular folks should put all their funds into questionable tech IPOs.

As well, with so much news baked into the Bitcoin narrative, you’ve got to wonder when the smart money will take their cues and exit the market. For this angle, I appreciate what InvestorPlace contributor Wayne Duggan wrote regarding the ProShares Bitcoin Strategy ETF (NYSEARCA:BITO).

In short, once a major market-moving event finally arrives, “traders often cash in on their winning trade and look ahead for the next big market catalyst.” You want to make sure you’re ahead of this exiting, not behind it.

I’ve covered Ethereum at InvestorPlace and other publications for a very long time. So when our own Thomas Logue wrote a headline stating that Ethereum could be the backbone of the future financial system, I wasn’t surprised at the arguments he presented.

Certainly, innovations such as decentralized finance (or DeFi to use the parlance of cryptos) are intriguing because of the inefficiencies built into traditional financial and investing infrastructures. In addition, Ethereum pioneered the concept of the smart contract, in theory paving the way for the elimination of middlemen entities like brokers and attorneys.

Who wouldn’t want that? Well, as the old saying goes, be careful what you wish for because you just might get it.

According to Clutch, a business-to-business research, ratings and review firm, it discovered that 90% of people prefer speaking with a human service representative instead of navigating through a phone menu. I think you can make the same case for finance and investing.

Honestly, stuff goes wrong all the time, especially in cyberspace. Therefore, while having middlemen is inefficient at times, the ability to access robust resolution to problems is a major plus. So I wouldn’t be too quick to overplay Ethereum’s fundamentals and downplay traditional networks.

Cryptos for Your Radar: Cardano (ADA)

I’m going to be blunt: Cardano is starting to worry me. Many weeks ago, I mentioned that I sold some of my Cardano holdings because I feared that prices would continue moving downward. Looking back, I’m beginning to think I should have sold more, maybe even all of my holdings.

The thing is, you just don’t know what the next day will bring for cryptos. So FOMO or the fear of missing out has kept me in the game. Nevertheless, I’m practicing what I’m preaching: I took out a healthy profit so if circumstances do go awry, you won’t see me fixate on the what ifs.

Another benefit of regularly buying and selling cryptos is that you can look at the sector more objectively — in fact, you’re incentivized to do so because you’re playing both sides of the field. Personally, that ADA hasn’t gone anywhere since late September of this year is bothersome. Other cryptos have picked up the pace, why not Cardano?

To be fair, technical indicators suggest that a breakout move is possible following its present consolidation. If so, we could see ADA cross above $3. However, speculators will want to be vigilant here because the coin could also break down.

Known as the “Ethereum killer” in some circles, Polkadot has earned a massive following thanks to its open-source sharding multichain protocol. While it’s a mouthful and can cause eyes to glaze over, the beauty of the Polkadot architecture is that it “facilitates cross-blockchain transfers of any data or asset types” and not just tokens.

Essentially, Polkadot allows different blockchains to communicate with each other seamlessly and efficiently. Thus, as my colleague David Moadel stated, the Ethereum killer might not be as accurate of a label as the “internet of blockchains.” Moadel explained it succinctly. “That’s the ultimate innovation with Polkadot: cross-chain communication and interoperability, all made possible by bringing multiple blockchains into one network.”

What fuels Polkadot, then, is that it built a better mousetrap than Ethereum. I don’t mean that in a pejorative sense. As you can see from other cryptos, their underlying blockchain protocols feature innovation built upon prior advancements.

But you must ask yourself: does building better mousetraps justify a multi-billion-dollar valuation? Regarding the DOT coin, prospective buyer should watch out for declining acquisition volume not confirming rising prices since early September of this year. Usually, you want to see these two metrics correlate with each other on upswings.

I’ll gladly admit that I simply did not understand Shiba Inu when a grassroots campaign shot the token into the collective consciousness. If I may be completely transparent with you, I’m not sure if I understand Shiba Inu today. It’s one of the strangest cryptos I’ve covered.

And you know what? I’m totally okay with that now. It seems that as cryptos become further integrated into the mainstream, their proponents have taken themselves — and their underlying technology — too seriously. No, I don’t think blockchain will cure cancer nor do I believe that it will lay the technical groundwork to do so.

Thankfully, I don’t have to deal with any BS from most Shiba Inu proponents. They want to have fun and make money doing so. Sure, the underlying proposition is based on the greater fool theory, even if no one wants to outright admit it.

I’ve come to a point where I appreciate such honesty. In a sector where apparently 13,000 entities are trying to save the world, SHIB reminds us why we initially fell in love with cryptos in the first place: to buy Lamborghinis and decentralization and stuff.

While I just got done talking about one of the silliest and most speculative cryptos in Shiba Inu, that doesn’t mean that I’ve completely gone cynical in my approach to digital assets. In my opinion, some standout blockchain projects certainly exist not because of their outlandish goals but rather their practical approach to decentralized solutions.

One such project is Filecoin. Billed as a decentralized storage system, Filecoin is an open protocol that loosely competes with cloud storage companies like Amazon (NASDAQ:AMZN) and Cloudflare (NYSE:NET) by approaching the sector from a different paradigm. Rather than data storage occurring through centralized administrative, Filecoin is decentralized from the bottom up, providing data security while making files easier to retrieve.

Best of all, Filecoin promotes a blockchain-based economy where anyone with internet access can participate in this file-sharing initiative. For instance, if you have extra storage space on your computer, you can provide spare capacity to the network, receiving crypto rewards for your troubles.

Coincidentally, FIL features an enticing technical pattern, appearing to coil up for a big move higher.

Cryptos for Your Radar: PancakeSwap (CAKE) 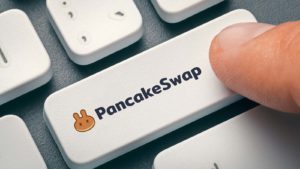 As ridiculous as the name sounds, PancakeSwap is actually an innovative projective. Per Coinmarketcap.com, PancakeSwap is an automated market maker, which is a DeFi application that allows anyone to provide liquidity to a crypto trading pair, earning fees for their trouble.

From a purely structural sense, I find this platform utterly fascinating. As you know, market makers allow trades to function smoothly and effectively. For instance, blue-chip stocks feature narrow bid-ask spreads because market makers understand that such investments almost always carry significant demand. On the other end of the spectrum, spreads are extremely wide for penny stocks because the market maker doesn’t know what to expect.

With innovations like PancakeSwap, anybody can participate in market making duties, which suggests greater competition in the field and thus, a more favorable outcome for individual investors and traders.

On the date of publication, Josh Enomoto held a LONG position in BTC, ETH and ADA. The opinions expressed in this article are those of the writer, subject to the InvestorPlace.com Publishing Guidelines.

The post 7 Cryptos to Keep on Your Radar as the Market Hits an Inflection Point appeared first on InvestorPlace.