By Pierre Raymond November 2, 2021
This story originally appeared on ValueWalk

The Broad Market Index was up 1.33% last week and only 27% of stocks out-performed the index.

Very few financial statement updates in these early weeks of a Securities and Exchange Commission (SEC) quarterly update so it is dangerous to draw Market wide or Macro conclusions from only a few observations. The concern with last quarters unusually strong rebound from the virus low last year is that it is a one-quarter wonder and growth will drop again in coming quarters.

What we have seen repeated in the data record is a well-defined consumer durables cycle. Demand for big-ticket consumer goods (autos and housing) follows a demand cycle that is influenced by interest rates and credit availability. These broad industrial/cyclical advances have been associated with higher inflation and each cycle peak in these industries since the end of WW2 has been forced by higher interest rates and tighter money policy with inflation rising.

There is no difference in this economic growth cycle. The advance is only three quarters old and the cycle uptrend historically has been 8 to 12 years from trough-to-peak. Inflation and commodity prices have risen and the central banks are reluctant to act because of the global health concern. This is also a typically response from monetary authorities. There is huge resistance to higher interest rates and the politicized US central bank (the Federal Reserve FED) is unlikely to make a policy shift so close to mid-term elections.

Guardians Of The Currency

The slow monetary response causes higher inflation to become expected for the future. That is a very likely outcome and that makes it critical for us to defend portfolios against the negative influence of higher interest rates. The best defense is to own rising growth companies. Look for MoneyTrees with a tall dark trunk (rising sales growth) a large green globe (higher profitability) and an hourglass shaped golden pot (higher profit margins and leverage).

Investors do not wait. Get ready for Active Management now!

Now is the time for investors to incorporate quantitative tools to empower their portfolio management. Any change in the direction of any of the principal components of earnings growth such as sales growth, gross margins, operating or financing costs, may be important indicators about future direction of the growth rate of the company. Financial Statement data for Micron Technology (NASDAQ:MU) shows a clear fundamental pattern.

How to Spot Prospective Growth!

Micron Technology, Inc. (NASDAQ:MU) has been a profitable company with persistently high cash return on total capital of 10% on average over the past 21 years. Over the long term the shares of Micron Technology Inc have declined by 38% relative to the broad market index.

Sales growth for this company looks very cyclical with a current strong uptrend. Just last year sales growth was negative but now is now positive again at 29.3%; which is high in the record of the company and higher than last quarter.

The company is recording a high and rising gross profit margin which has been 69% correlated with the share price. Inventory relative to sales continues to fall which helps the gross margin. Costs also continue to fall as demonstrated by the direction of SG&A expenses. That implies that the company has additional scope for further cost containment and that the falling costs are feeding the EBITDA growth rate relative to sales. Higher gross margins and lower SG&A expenses are producing an acceleration in EBITDA relative to sales which has been 61% correlated with the direction of the share price. Interest costs are also very cyclical but have stabilized and are currently low in the record of the company. Higher interest costs are a risk as it not only slows cash flow growth but are often associated with lower valuation.

More recently, the shares of Micron Technology Inc have advanced by 15% since the May, 2019 low. The shares are trading at lower-end of the volatility range in a 29-month rising relative share price trend.

The current depressed share price provides a good opportunity to buy the shares of this evidently accelerating company.

The more stable the pot appears, the better the attributes. Green and gold are good. Red is bad and the more intense the red the more urgent the call to action. 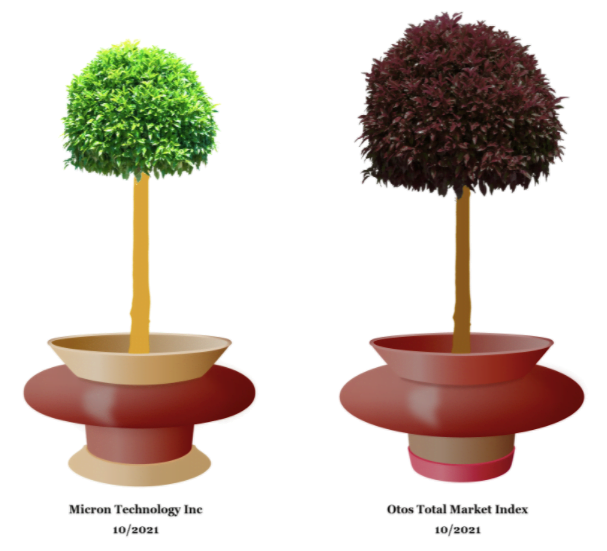 The 3 points that will dominate the CEO's agenda in 2022