Shell (RDS.A) also begins exporting oil and gas via the West Delta-143-A facility, which was initially expected to remain inactive for repairing purposes.

The company also started oil and gas exporting via the West Delta-143-A facility, which serves as a transfer station for the Ursa, Medusa, Mars A and Olympus production fields and platforms.

Shell operates the WD-143-A platform, with a 71.5% ownership interest, while BP plc BP owns the rest. The facility was initially expected to remain inactive for repairing purposes until the year’s end. With repairs complete, oil and gas started to run through the WD-143-A structure over again.

The storm wiped out much of the U.S. Gulf offshore oil and gas production.Shell expected oil supplies from the Gulf of Mexico to get affected by 200,000-250,000 barrels per day due to the Ida-led damages.

Shell was among the most affected producers as the storm caused significant structural damages to some of its WD-143 offshore platforms. In third-quarter 2021, the company’s upstream volumes averaged 2,081 thousand oil-equivalent barrels per day, which declined 5.5% from the year-ago period mainly due to disruptions in the Gulf’s production after hurricane Ida swept through the region.

Shell is a major player in the U.S. Gulf of Mexico, with eight deep-water production hubs and a network of subsea infrastructure. Once the Mars and Ursa platforms are fully enhanced, Shell will have 100% of its operated production in the Gulf of Mexico back in operation earlier than expected.

Shell is one of the primary oil majors — a group of U.S. and Europe-based big energy multinationals. The company is fully integrated, as it participates in every aspect related to energy, from oil production to refining and marketing.

Shares of the company have outperformed the industry in the past six months. The stock has gained 16.7% compared with the industry’s 11.9% growth. 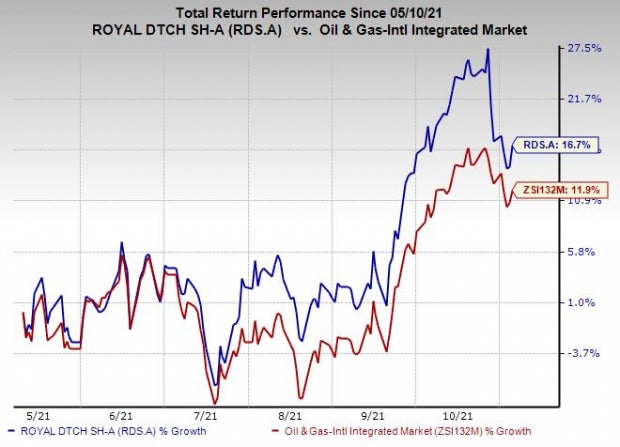 Some better-ranked players in the energy space are SM Energy Company SM and ConocoPhillips COP, each currently sporting a Zacks Rank #1 (Strong Buy). You can see the complete list of today’s Zacks #1 Rank stocks here.

ConocoPhillips’ earnings for 2021 are expected to increase 41.3% year over year.

3 Stocks to Buy and Hold for Retirement

3 Stocks to Buy and Hold for Retirement