By Luke Lango November 8, 2021
This story originally appeared on InvestorPlace

Zillow (NASDAQ:ZM) sent shockwaves through the real estate industry last week when the company announced its abrupt departure from the iBuying industry.

“iBuying,” or online home shopping, is when real estate companies leverage advanced pricing algorithms to make instant cash offers on homes via a website or mobile app, renovate those homes, then flip them for a profit in a few months.

Zillow’s exit from iBuying was huge news for two reasons:

Two, Zillow is the second-largest iBuyer in the industry, so the departure leaves a huge “hole” in the iBuying world.

A lot of investors were floored by the news. After all, Zillow stock dropped 36% last week.

But we weren’t surprised – at all – nor were our readers of our flagship investment research advisory, Innovation Investor.

Instead of being surprised, they were making money, because they were smartly invested in Zillow’s biggest competitor, Opendoor (NASDAQ:OPEN), which is up 55% over the past three months.

You see, at Innovation Investor, we pride ourselves in investing in the most promising technology companies, and we do that through hours, days, weeks, and even months of scientific research into the core technologies that power these companies.

We don’t fall for hype. We invest in legitimate world-changing technology.

And, truth be told, our scientific research into the iBuying industry found months ago that:

At the end of the day, the core technology enabling iBuyers is their pricing algorithm. These companies need to be able to leverage robust data-sets to quasi-predict home price trends several months into the future, so that they can buy homes confidently and sell them for a profit.

Knowing this, our research into the various iBuyers – Zillow, Opendoor, Offerpad, etc. – revolved around us intimately understanding their pricing algorithms and their datasets, because the company with the best pricing algorithm projects as the industry winner.

To do this, we dug through all of their SEC filings and marketing materials, looked into their management teams and employee bases, talked to folks in the industry, used their apps endlessly, and even made an attempt to sell a home through each of them, ultimately deciding to sell a home via Opendoor.

Opendoor has a much more tech-focused team of engineers than Zillow, who have gathered a much richer data-set than Zillow, and developed a much smarter pricing algorithm that responds more accurately and dynamically to housing market trends.

So, we told Innovation Investor subscribers to forget Zillow, and invest in Opendoor – a company that we firmly believe will turn into the “Amazon of Houses.”

Zillow’s departure from the iBuying market confirms that our research yielded an accurate conclusion.

Just look at this data. While Opendoor responded to a cooling housing market in September by reducing its offer prices and number of acquisitions, Zillow powered ahead, paying top-dollar for a lot of homes that they are now under water on… 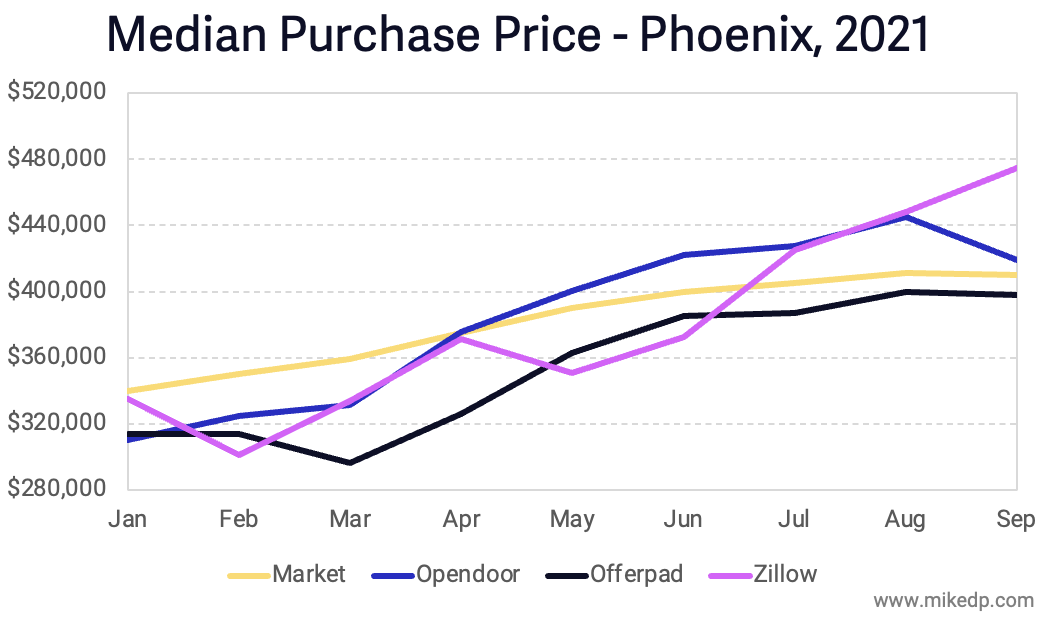 Interestingly enough, Zillow said last week that despite its decision to leave the iBuying business, conversions in that business picked up very quickly toward the end of last quarter.

So, the iBuying industry continues to grow and gain momentum – just without Zillow.

It’s “green shoots” for Opendoor. This past week essentially proved three things to the world:

2) iBuying as a business is really hard.

3) Opendoor is the only company in the world with legitimate-enough technology to do iBuying at scale.

Folks… Opendoor has “next Amazon” written all over it.

And at Innovation Investor, we’re “all-in” with this “next Amazon.”

So, do yourself a favor, and don’t just buy Opendoor stock for 10X gains – buy all of these next-gen technology disruptors for 10X gains.

The post Zillow’s Exit From iBuying Confirms Opendoor Stock Is the ‘Next Amazon’ appeared first on InvestorPlace.