InvestorPlace - Stock Market News, Stock Advice & Trading Tips So, if the housing space should stay hot, or at least avoid a crash, what are some of the stocks...

By Thomas Niel November 9, 2021
This story originally appeared on InvestorPlace

With recent news of Zillow’s (NASDAQ:ZG) costly exit out of the ibuyer business, you may question the merits of considering housing plays as stocks to buy right now. It’s clear the digital-first real estate services company got in over its head with its move into the house flipping game. But it may not be a sign of widespread trouble ahead for this space.

How so? Although mortgage rates are on the rise, demand remains high for housing. Home sales surged 7% in September. The non-interest rate factors that have helped boost residential real estate since the start of the Covid-19 pandemic remain in play.

Said factors (namely, a lack of supply) may not only help sustain the recent housing boom a little bit longer. It may help soften the blow. Assuming the Federal Reserve begins its “interest rate liftoff,” and mortgage rates really start making their way toward historic norms.

So, if the housing space should stay hot, or at least avoid a crash, what are some of the stocks to buy with high exposure to this industry. These seven, a mix of homebuilders, ibuyers, mortgage lenders and real estate brokerages, are some of the top names to consider: 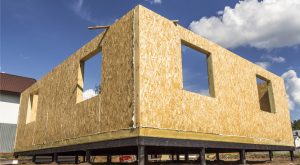 Due to the cyclical nature of the industry, it’s not incorrect for homebuilder stocks to sell at low valuations. Yet even for a homebuilder, shares in Beazer Homes USA appear cheap.

This is one of the value plays among residential construction stocks. It trades for just 5.4x estimated earnings for FY22 (fiscal year ending September 2022), and at a slight (16%) discount to book value. However, don’t think that it’s simply a buy because of its low valuation.

Back in August, Janney’s Tyler Batory, gave shares a buy rating and argued that the company — long a deleveraging story — was turning into a growth story thanks to substantial changes to its balance sheet. With these changes, the analyst believes the company could expand its land ownership, and in turn, its operations.

Also projecting that its margin growth would carry into FY22, Batory at the time gave shares a $23 per share price target. That’s around 22% above where the stock trades today (around $19 per share). After pulling back during the summer, BZH stock could make its way toward this price target. If it posts strong numbers when it next reports quarterly results (after the close Nov. 10) this possible rebound may be just around the corner.

Like Beazer, CCS stock is another one of the cheaper homebuilding plays. Sporting an even lower forward earnings multiple (4.5x, based on 2022 projections), this is another housing play that should be up your alley if you’re a fan of cheap stocks.

Not only that, there’s one aspect to this residential builder that may make it more appealing than other names. As a Seeking Alpha commentator discussed back in September, this company focuses primarily on entry level homes, which make up 80% of its deliveries.

This focus on low-cost starter homes comes with its many benefits. For example, starter homes have been one of the strongest segments of the overall booming housing market. Along with this, its exposure to the lower end of the new home market may protect it in case of a downturn, as this segment will be hurt much less than, say, the luxury home builder segment.

With this advantage, and its low valuation, it’s no surprise Century Communities has soared 58.9% this year. Yet still cheap, and with the possibility that housing stays stronger than many currently expect? Shares could see another round of strong performance in the coming year. Trending higher in recent weeks, now may be the time to buy.

Why should you include Meritage Homes on a list of housing stocks to buy? Simple, growth at a more-than-reasonable price. As my InvestorPlace colleague Muslim Farooque wrote last month, the company has experienced strong revenue growth and margin expansion, but still trades at a super low.

Take a look at projections for the coming year, and this point hits home even further. Sporting a single-digit P/E ratio, you would think this would be a value, but not a growth play. Yet with projections calling for earnings-per-share (EPS) to raise from $19 to $23.28, or around 22.5%, between 2021 and 2022, its clear MTH stock warrants a much higher valuation.

If EPS for 2022 ends up coming in at $23.28 per share, and the stock moves to a high valuation, like, say the 7x, around what PulteGroup (NYSE:PHM) trades for, the stock would be trading for around $163 per share.

In other words, around 45% above the current stock price. Performing well in recent weeks, if housing stays strong (or at least resilient), and the company delivers results in line with the above-mentioned expectations, this mid-cap name could deliver solid returns over the next 12 months.

When news of Zillow’s heavy losses in iBuying (instant home buying) broke, investors bid down OPEN stock along with it. But as more become bullish that Zillow’s loss may be this company’s gain, shares have recouped most of their losses.

This makes sense. With the exit of a major competitor it will likely become easier for Opendoor to buy, fix up and flip residential properties at a profit. But admittedly, the exit of Zillow isn’t the only thing needed to help sustain (and grow) this stock.

Putting it simply, the factors sustaining the current housing boom (low supply, low interest rates) need to stay constant to sustain, and grow, the price of this stock. Any sort of repeat of the late 2000s housing crisis could be detrimental. It could put this company in a situation that makes what’s going on with Zillow today pale in comparison.

Among the housing stocks discussed above and below, this may be the riskiest. Not only does the housing market need to stay resilient. The company still needs to scale up its operations in order to reach the point of profitability. Nevertheless, if you’re bullish that Opendoor can pull this off, and fully “disrupt” the way residential properties are bought and sold, you may want to enter a position at today’s prices (around $22 per share).

Like homebuilders, major mortgage lending stocks are trading at low valuations. This is due to the expectation of lower revenues/earnings in the coming year for the industry.

As a result, even the mortgage stocks popular with retail investors, like Rocket Companies (more below) and UWM (NYSE:UWMC) trade at single-digit P/E ratios. But if you’re looking for even more of a value play, you may want to consider one that hasn’t been “hot” in the eyes of Reddit traders: PFSI stock.

Like Rocket and UWM, PennyMac Financial specializes in originating and servicing residential mortgages. With projections calling for its earnings to dip in the coming year, as interest rates move up, shares trade at a super-low 3.6x estimated 2021 EPS and 5.2x estimated 2022 EPS. That’s particularly low given that shares historically traded between 5x and 8x earnings.

As its bottom-line normalizes, and some of the uncertainty over how far its profitability will drop after its banner year in 2020 (when it earned $21.91 per share), investors may be willing to give the stock (at $67 per share) an additional boost. Better yet, what may happen if the Federal Reserve sticks to its plans not to raise rates by 2023. Results next year could come in better than expected. Don’t bet the ranch there’s another epic run-up from here. But with shares likely undervalued, this remains one of the housing stocks to buy.

A repeat of the “to the moon” moves it made back in March may not be in the cards. But mortgage lender Rocket Companies is another name that could see a boost. If fears about a cooling housing market/rising interest rates prove to be overblown. That’s been what has kept RKT stock stuck at between $15 and $20 per share over the past few months.

Yet even as recent quarterly results, and changes to its guidance suggest things will play out as expected, results in the coming quarters could surprise. Again, another Reddit rally doesn’t seem likely. Yet I wouldn’t count out the chances of a modest meme pop happening for it again. A few weeks back, our Nicholas Chahine argued this is a possibility, albeit not the sole reason why you should enter a position in shares.

Coupled with the possibility of another pop on good results or just meme mania, is the likely minimal downside risk in this name. Already beaten down, on expectations of the housing boom cooling off considerably, disappointment is already priced into shares.

It’s questionable whether RKT stock has what it takes to “rocket” in price once again. But at around $17 per share, the risk/return proposition may be in your favor.

We’ve gone through homebuilders, mortgage lenders and even a leading ibuyer platform. Now, let’s look at one of the housing stocks to buy from another segment of the industry: the real estate brokerage segment.

In the minds of many, ReMax may be seen as an old-school real estate agency, making little changes since its days of running those ads featuring a branded hot air balloon, which touted the firm as being “above the crowd” of other names in the industry.

Yet this realtor may have better prospects than the market gives it credit. It continues to thrive with the agent-centric, franchise business model it uses for both its ReMax and Motto Mortgage brands. Along with this, the company is staying on top of digitalization trends in the industry, via its ownership of mortgage loan processor Wemlo. Analyst projections call for the company to grow its sales and earnings by double-digits between this year and the next.

Not bad, considering that RMAX stock, at around $31.50 per share, trades for just 12.4x next year’s earnings estimates. Add in its solid 2.91% dividend yield, and there’s plenty of reason to consider this old-school realtor a buy. Whether the housing market continues to run hot, or if things cool down some more over the next twelve months.

The post 7 Stocks to Buy to Profit From Today’s Home Buyer FOMO appeared first on InvestorPlace.