Buy These Growth-Focused Stocks Before Earnings and Hold for Years?

Today, we explore a few new-age retailers trading well below their highs heading into their upcoming earnings reports. The stocks also happen to trade between $20 to $35 a share...

By Benjamin Rains November 12, 2021
This story originally appeared on Zacks

Stocks bounced back in the last two sessions after the market finally snapped its winning streak during the week of November 8. Wall Street took profits after a month-plus rally sent all three major U.S. indexes to new records to start the second month of the fourth quarter.

Many have pointed to continuing inflation, and rightfully so after it hit a 30-year high in October. Investors are now left to decide if the hot CPI data will force the Fed to start lifting rates sooner than projected.

The central bank has started to taper its bond-buying program and it plans to conclude its stimulus-focused purchases by June, with it set to keep it core interest rate at its current rock-bottom levels at least until then.

But the market’s quick rebound could mean Wall Street remains sanguine even in the face of rising prices, persistent supply chain bottlenecks, and a struggle to fill open jobs.

It’s worth pointing out that the current surge in prices have yet to show up in the S&P 500 margins outlook for FY22 or FY23, even though they are impacting things in the near-term (also read: What's Going on with Earnings in Q4 and Beyond).

Uncertainty and headwinds remain, but investors likely want to stay on the hunt for strong stocks, especially if they are long-term buyers. Today, we explore a few new-age retailers trading well below their highs heading into their upcoming earnings reports. The stocks also happen to trade between $20 to $35 a share… 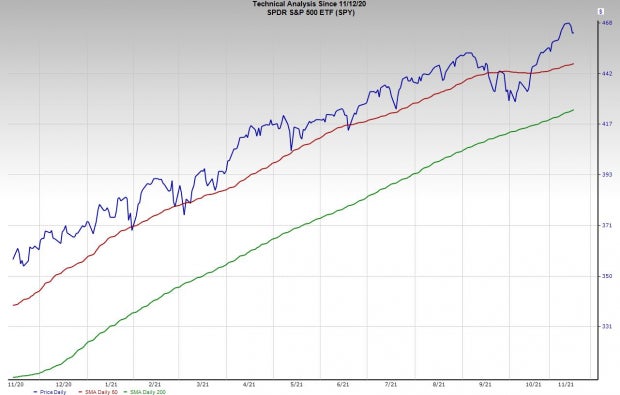 Traeger helped pioneer the wood pellet grill that it calls a “versatile and easy to use outdoor cooking system.” The company’s pellet grills use all-natural hardwood fuel and aim to provide 6-in-1 versatility in order to grill, smoke, bake, roast, braise and barbecue. Traeger has caught fire as part of a wave of new-age, high-end brands popular among a younger generation of consumers.

COOK went public at the end of July and climbed nearly 25% on its debut as Wall Street continued to jump on IPOs. Traeger’s first quarter as a public firm saw it post 39% revenue growth, with grills up 40%, consumables 28% higher, while accessories surged 65%. It did face earnings pressure amid supply chain setbacks, but its adjusted EPS of $0.15 a share easily topped our $0.04 estimate.

Traeger executives believe it has the “potential to deliver approximately 20% annual revenue growth and 20% adjusted EBITDA margins” over the long term as it continues to expand. These plans include its newly launched (Nov. 2) Traeger Provisions meal-kit style food delivery service to help make a variety of meals on the grill.

COOK has fallen over 35% from its early August highs and is currently trading just under $20 a share. Yet, its Zacks consensus price target of $31.57 a share marks over 50% upside. Traeger lands a Zacks Rank #3 (Hold) heading into Q3 financial release on Monday, November 15. And seven of the eight brokerage recommendations Zacks has are “Strong Buys,” with the other at a “Buy.”

Sonos is a home audio firm that specializes in wireless and multi-room sound systems. It competes against Bose and others in the higher-end home speaker space. The firm sells a range of sleek, connected speakers, subwoofers, soundbars for TVs, and more, with packages that run up to nearly $2,000. Earlier this year, Sonos entered the popular portable smart speaker space with its $179 mass-market Roam speaker.

The company has benefited from the larger shift to modern, connected devices and it’s poised to gain as more people spend on home-based upgrades. The firm is also boosted its non-speaker space, with an ad-free streaming tier of its music service dubbed Sonos Radio HD. The offering costs $7.99 a month and competes against Spotify and various other streaming music platforms.

The speaker company’s strong management team helped it rip off four-straight massive quarterly earnings beats. This included posting adjusted earnings of +$0.27 a share last quarter vs. the Zacks consensus that called for a -$0.17 loss. Plus, the most recent Q4 EPS estimate—which Zacks calls the most accurate—comes in at +$0.07 a share, compared to the overall consensus of an adjusted loss of -$0.07. This could mean Sonos is due for another huge beat.

Sonos is scheduled to report its Q4 results on Wednesday, November 17 and its recent earnings revisions help it land a Zacks Rank #1 (Strong Buy) right now. Sonos also grabs an “A” grade for Growth in our Style Scores system and its Audio Video Production space ranks in the top 13% of our 250 Zacks industries.

The audio firm’s shares soared off their covid lows of under $10 to over $40 in April 2021. SONO is still up 50% this year, but it trades 20% beneath its highs at around $34 a share right now. Plus, its current Zacks consensus price target represents nearly 25% upside to Friday’s levels. And Sonos just recently popped above its 50-day moving average and it trades near its year-long lows at 26.7X forward earnings.

This Is Why Chevron (CVX) is Set for Strong Q4 Earnings