GameStop Is Set to Rebound if Q3 Sales Beat Expectations

GameStop (NYSE:GME) looks like it could be turning the corner financially. In its fiscal second-quarter results released on Sept. 8, sales rose to $1.183 billion from $942 million last year. Moreover, its net income loss was much lower than last year. Investors in GME stock could see a major turnaround sometime within the next year. 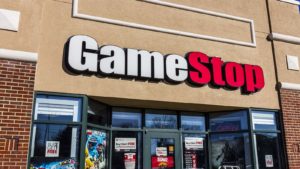 Moreover, as I pointed out in my article last month, the company’s quarterly net free cash flow (FCF) loss was much lower compared to fiscal Q1. This portends a potential return to positive FCF once its sales levels rise.

As a result, GME stock has been rising. For example, since reaching a low of $146.80 per share on Aug. 4, its price has increased dramatically.

The market must be expecting the company’s financial health to start turning around.

Where Things Stand Now for GameStop

GameStop probably won’t release its Q3 earnings for the fiscal quarter ending Oct. 31 until the first week of December. However, we can see what the results might be by referring to analysts’ estimates.

For example, according to Yahoo! Finance, four analysts predict that the company will lose 52 cents in its fiscal Q3 ending Oct. 31. That compares with a loss of 53 cents last year.

However, their sales estimates are for $1.19 billion this quarter compared to just over $1 billion last year. That represents a gain of 18.44% over the past year. Assuming the company can beat these estimates, GME stock could rise further.

The reason, as I mentioned earlier, is that the company is very close to becoming FCF positive. Just a slight increase in sales will help it turn the corner.

But it’s not as if the company is ever going to run out of cash. As of July 31, it had $1.78 billion in cash and restricted cash. That is more than enough to cover its cash burn for a good long time, even if the company doesn’t turn FCF positive soon.

Where the Analysts Stand

So far this stock has been the perfect example of a situation where the stock climbs a “wall of worry.” Not long ago, analysts like this writer at The Motley Fool were crying wolf about the company’s ability to turn around.

The problem is, if you believed this author when the stock was at $158.51 on April 21, you had no chance of making money.

This illustrates a typical problem with analysts. They don’t see things the way a company does. The business is operating its finances and closing stores, reducing inventory and generally attempting to turn things around. The market believes them so far. It is willing to look into the future and discount the expected turnaround.

But analysts are typically more critical, stubborn in some cases and generally unwilling to believe in turnarounds. The Motley Fool author mentioned above said it could be a long time before GameStop makes $8 billion in revenue, as it did several years ago.

For example, according to Seeking Alpha, four analysts forecast sales of $5.67 billion this year, but just $5.54 billion next year. They foresee revenue falling next year, even though no one is predicting a recession. That seems quite hard to believe, and it reflects the deep skepticism on Wall Street.

What to Do With GME Stock

I like this situation in GME stock. I believe the company’s management is probably more focused on performing a turnaround than analysts really understand. It provides a huge opportunity for investors that are willing to take a degree of risk in their portfolio.

Therefore, if you see sales outperform expectations for the quarter ending Oct. 31, expect to see GME stock surge higher. One reason is that there is still a high level of short positions in the stock.

As of Nov. 11, Yahoo! Finance reports (using data from Morningstar) that more than 15% of the stock’s float is short. That means a good percentage of publicly traded share owners expect to see GME stock fall from here.

That potentially sets the stock up for a rebound if sales for Q3 and Q4 come in higher than the miserable expectations of analysts. One reason for this is that higher sales could lead to a positive FCF stance for the company next year. Therefore, look for GME stock to turn the corner if this happens.

On the date of publication, Mark R. Hake did not hold any position in any of the securities mentioned (directly or indirectly) in the article. The opinions expressed in this article are those of the writer, subject to the InvestorPlace.com Publishing Guidelines.

The post GameStop Is Set to Rebound if Q3 Sales Beat Expectations appeared first on InvestorPlace.