Boeing (BA) Secures Deal Worth $9B for 737 MAX Airplanes

The Boeing Company (BA) clinches order for 72 737-800BCF aircrafts from Akasa Air. Valued at nearly $9 billion, the deal gives Boeing a platform to grow in the expanding Indian...

The Boeing Company BA recently clinched an order for 72 737-800BCF airplanes from Akasa Air, a brand of SNV Aviation, at the Dubai Airshow. Valued at nearly $9 billion, the deal provides an opportunity to Boeing to expand its presence in India, one of the fastest growing aviation markets.

The order comprises two variants from Boeing’s 737 Max family of aircrafts, the 737-8 and the high-capacity 737-8-200. This marks Akasa Air’s first airplane order in a bid to operate its new airline services in India. The new fleet of 737 is anticipated to take flight from summer 2022.

Growth Prospects of Boeing in India

In November last year, Boeing’s 737 Max family of aircrafts got the flight approval from the Federal Aviation Administration (“FAA”). Since then the aircraft has been witnessing robust growth primarily on account of increase in demand for commercial flights as restrictions on domestic and international travelling ease. Evidently, the company delivered 66 737 aircrafts in the third quarter compared with only three in the year-ago period.

The current deal provides a competitive edge to Boeing with regard to expanding in the Indian commercial aircraft market as 737 MAX family delivers superior efficiency, flexibility and reliability while reducing fuel use and carbon emissions by at least 14% compared to airplanes it replaces. Such enhanced features open more avenues for Boeing to clinch orders for 737 MAX going forward, as demand improvement is being witnessed in air travel.

To this end, it is imperative to mention that as per Boeing’s Commercial Market Outlook (“CMO”), India’s passenger traffic is projected to beat the global growth. The growth is anticipated to double from the pre-pandemic levels by 2030 amid the COVID-19 induced challenges.

Boeing further anticipates the need of 2,200 commercial flights in South Asia over the next 20 years to meet the rising demand. Valued at nearly $320 billion, the requirement of 2,200 flights clearly highlights Boeing’s strong prospects in the Indian commercial aircraft space over the long haul. The latest order secured by the jet giant is a further testimony to that.

Per Boeing’s CMO, requirement for aircraft by airlines globally is projected to be over 43,000 valued at $7.2 trillion over the next 20 years. Meanwhile, 19,000 airplanes valued at $3.2 trillion will be needed to meet the rising demand for the next 10 years. Such projections will not only benefit Boeing but other aerospace majors namely Airbus SE EADSY, Embraer SA ERJ and Textron TXT.

For instance, Airbus SE family of commercial aircrafts comprises A220 Family, A320 family, A330 family, A350 family and A380. Airbus SE made shipments of 127 commercial aircraft in the third quarter of 2021. In the Dubai Air Show, the company clinched a deal from Air Tanzania for its A220s family of aircrafts and Uganda Airlines for its A330s family of aircrafts, thus adding two African airlines to its list of fleet customers.

Embraer’s family of jets consists of family of E-JETS E2, E-JETS and ERJs.  At the Dubai Airshow, Embraer won an order worth $2.9 billion for three new E175 E-Jets, plus three purchase right aircraft from Overland Airways of Lagos, Nigeria.

Shares of Boeing have gained 11.5% in the past year against the industry’s decline of 26.9%. 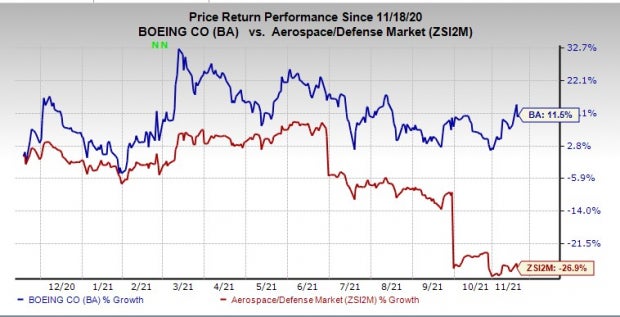 Stocks Stage Comeback Ahead of Fed Decision: What To Do Now

Startups and the Gen Z Worker: A Match Made in Tech Heaven