McDonald's (MCD) announces two strategic partnerships with DoorDash and Uber Eats in a bid to boost its delivery program. 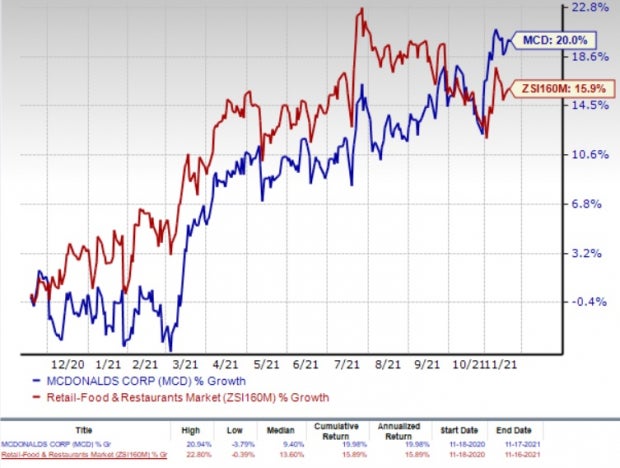 Shares of McDonald's have gained 20% in the past year, compared with the industry’s rally of 15.9%. Robust drive-thru presence, and its investments in delivery and digitization over the past few years have aided the company in countering the pandemic. Robust digitalization will help the company in driving long-term growth and capturing market share.
The Zacks Rank #3 (Hold) company has been benefiting from the launch of it loyalty program. The new loyalty program will not only help in retaining the existing customers but also help in expanding the customer base. The loyalty program is likely to drive sales and average checks. During the third-quarter 2021 conference call, the company announced that the launch of its loyalty program in the United States has surpassed expectations. In just a few months, the company has more than 1 million members enrolled with over 15 million active loyalty members earning rewards.

Looking for a Growth Stock? 3 Reasons Why Cheniere Energy (LNG) is a Solid Choice

Looking for a Growth Stock? 3 Reasons Why Focus Financial Partners Inc. (FOCS) is a Solid Choice

This Mask Can Help You Get a Better Night's Sleep