"Don't care what others are going to think, he insists," is one of the tips that Sofía Elizondo, co-founder of M de Maní, shares with us within the framework of International Women's Entrepreneur Day.

By María Arcia November 19, 2021
This article was translated from our Spanish edition using AI technologies. Errors may exist due to this process. Opinions expressed by Entrepreneur contributors are their own.

What happens when one of your favorite items is not on the healthy and nutritious food menu? The answer is simple, you develop your own version. However, as they say, it is easier said than done.

When we start the diet or simply want to change our lifestyle and ways of eating a bit, finding ingredients or items that we like and that fulfill the proper nutrition functions can become a challenge.

In a context similar to the one I have just described, Sofía Elizondo and Caticú Elizondo met, two cousins who studied Food Engineering and founded M de Maní, a healthy food brand.

Recently graduated and eager to undertake Sofi and Cati wanted to solve a need that was presented to each of them in a different way. “In 2013 I was living a vegan lifestyle so I wanted to eat less processed foods and Cati is a marathoner… Both she and I were interested in peanut butter as a product, but there was nothing good [or with adequate nutritional value ] and we said to ourselves 'we should be able to do something', and of course, as food engineers at last, we got down to work ”, explains Sofía Elizondo in an exclusive interview.

In this way, the entrepreneurs conducted trials, gave their family and friends a taste of peanut butter. They were also presented with the opportunity to sell on consignment at a local store in Monterrey.

“If people like it well, and if not, nothing happens. While we were getting a job, presenting the products was “let's see what happens”, says Sofía.

It sounds a bit ironic, but as the entrepreneur expressed “ inevitably with the effort things grow” , and the two cousins, who consider themselves “quite insistent and determined” people, said to each other: if we are going to do this, let 's go to do it right.

This is how M de Maní , peanut butter and other flavors was born, with which they seek to contribute in a positive way to food in Mexico. "We started to develop the brand with well-made nutritional labels, we went to more stores ... We were very clear that what we wanted was to enter the supermarket, the goal was always to be the first on the shelves that had a natural and healthy offer".

This venture began with 10,000 Mexican pesos and the support of their relatives, with that they were able to pay for a branding that they were given at "a super price", buy the first peanuts and cook with the tools they had in their kitchen.

"I remember that we took out three labels of each flavor just because we really did not know what was next, so we started with 10,000 pesos in March 2014 and now we have grown a lot, we are in more than 600 points of sale in self-service chains nationwide, we have an online store and we sell in digital supermarkets ”, explains Sofía.

M de Maní's products do not contain hydrogenated fats, preservatives, or colorants, Cacahuatina, Almendrina, Anacardina, and Avellina have presentations of one kilogram, 200 grams, and a pocket presentation of 15 grams.

What did we do when we tagged? See Shark Tank

“They sent us an email [to participate] and we thought it was a joke,” Sofía says that Cati introduced her to Shark Tank in its American version and when they first started the business they sat down to watch the program while they placed the labels on their products.

"When we just started we turned on the TV while we labeled each bottle and we watched Shark Tank , the one from the United States, to rehearse and according to us to have a business perspective because in the end we are food engineers without preparation in business, we have been learning everything", says the entrepreneur. 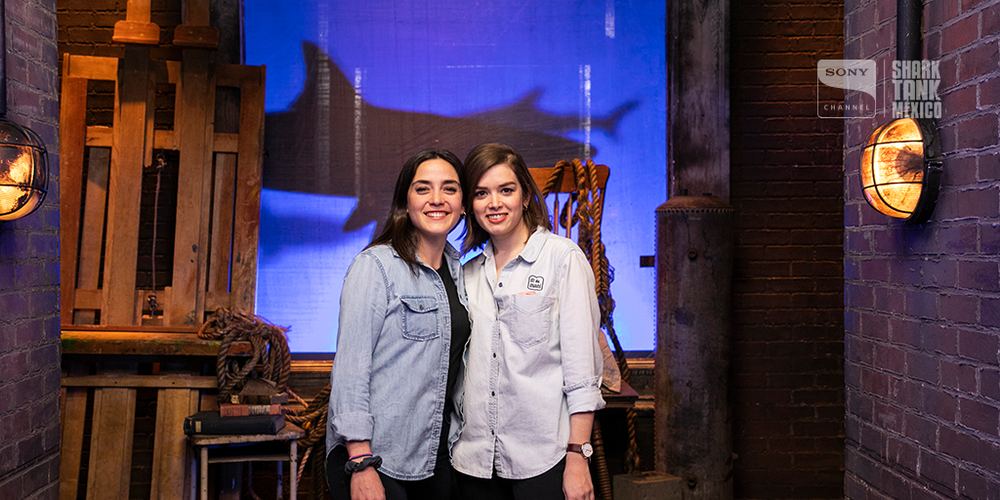 Although Sofía confesses that she would “die of shame if one day she appeared on TV”, they received an email that invited them to participate in Shark Tank México that is broadcast on Canal Sony , and they were part of the special of women entrepreneurs of the sixth season of the program.

Sofi and Cati came to the show looking for an investment of 3 million Mexican pesos in exchange for 15% of their company and obtained the attention and commitment of three sharks, among which they caught what they call "the face of Shark 's health. Tank México ”, yes Rodrigo Herrera .

The entrepreneurs achieved the investment of 2.4 million pesos from Marisa Lazo , Ana Victoria García , and Rodrigo for 21% of the brand.

"It doesn't matter what people say"

Something that these entrepreneurs have always been clear about is that their product is good and healthy, "it is what it is, when you are looking for healthy options there is no way to lower the price," says Sofía. In this context, M de Maní continues to work to consolidate its position in the market and in the minds of consumers.

As part of the International Day of Entrepreneurship , Sofía Elizondo gives us three tips for her female colleagues:

1. Don't be afraid to ask for help

“Asking for help strengthens you, on the one hand it makes you more humble, it puts you on a learning plan and on the other hand, you skip the blows, you avoid learning on your own with its consequences and the costs that this may have. This gives you a fastpass to learning and teaches you an attitude in which everything you can see on the outside becomes valuable information because you are absorbing ”.

2. Don't get distracted by what others are doing

“Many times you start to have competitors or your own friends, your acquaintances or the people in your networks, as it always seems that everyone is doing very well, except for you, and that does more damage than it prompts, So I think that focusing on what you are doing and believing in it is everything because there are too many distractions, especially now that the networks can even depress and paralyze you, don't compare yourself to anyone ”.

“At first we were embarrassed to be insistent because sometimes as women we get too many labels, for example: if you like directing they tell you that you are very bossy and not that you are a leader. I think we feel sorry for how others are going to perceive us and that they classify us as 'stupid', but in the end that wins the race, being on top, being persistent, having clear goals and talone, that is, that does everything the difference ... If out of pain or what they will say, so as not to sound like what people say, you can't get to where you need to go, you have to skip that, and this is part of the biggest advice I always give, which is not to care . what others are going to think , but in entrepreneurship issues I think that being insistent is half of your job ”.

Roblox vs. Activision Blizzard: Which Video Game Stock is a Better Buy?

The Smart Way to Lend Money to Family and Friends