Starbucks (SBUX) benefits from robust comps growth, digitalization and expansion efforts. The company's earnings in fiscal 2022 are likely to be impacted by strategic investments and cost inflation.

Starbucks Corporation SBUX has been benefiting from robust comps growth, digitalization and expansion efforts. However, strategic investments and cost inflation are likely to dent the company’s earnings in fiscal 2022. So far this year, the company’s shares have gained 7.3%, compared with the industry’s rally of 11.8%.

Starbucks continues to benefit from robust comps growth. The company’s U.S. comps have impressed investors for the third straight quarter. In fourth-quarter fiscal 2021, the company’s North America segment reported comps growth of 22% year over year, owing to an 18% increase in transaction comps and a 3% rise in average ticket. U.S. comps rose 20% in the fiscal fourth quarter, owing to a material increase in transaction comps of 19%. The company now anticipates global comparable sales to reach high-single digits in fiscal 2022.
Despite the pandemic, the company has been expanding its presence. Starbucks opened 130 and 260 net new stores in third and fourth-quarter fiscal 2020, respectively. It inaugurated 1,400 new stores in fiscal 2020. In fiscal 2021, Starbucks opened 1,173 net new stores worldwide, bringing the total store count to 33,833. The company expects to inaugurate nearly 2,000 net new stores worldwide in fiscal 2022. In terms of expansion in China, it opened 225 net new stores (in the fiscal fourth quarter) and 654 net new stores (in fiscal 2021), thereby bringing the total count to 5,360 stores in the region. The company plans to build 600 net new stores annually over the next five years in Mainland China, which will double the market's store count from the end of fiscal 2017 to 6,000 across 230 cities.
During fourth-quarter fiscal 2021, operations in Starbucks China were affected by pandemic-induced restrictions across 18 provincial level regions. With a majority of the stores closed (or operating at different levels of elevated public health protocols), the company reported constrained customer mobility with operations pertaining to mobile ordering and limited seating. Although the crisis affected the recovery momentum, the company witnessed a recovery in September, driven by a solid pace of store developments and significant growth in digital customer relationships. In the fiscal fourth quarter, the company registered a 5% sequential increase in its digital footprint with Starbucks Rewards reaching 17.9 million active members. Emphasis on member engagement and exclusive offerings favored the company. Also, frequency of purchases by Gold members stood at pre-pandemic levels.
The Zacks Rank #3 (Hold) company made progress with respect to personalized digital relationship to expand reach with members. This includes program enhancements like Stars for Everyone. Starbucks initiated payment partnerships with PayPal and Bakkt, thereby enabling customers to reload their Starbucks card via a range of cryptocurrencies (including Bitcoin and Ethereum) coupled with the option of converting digital currencies to physical currency. The company is exploring the blockchain platform for ways to connect Starbucks Rewards program with other merchant rewards program along with the motive of tokenization of stars. 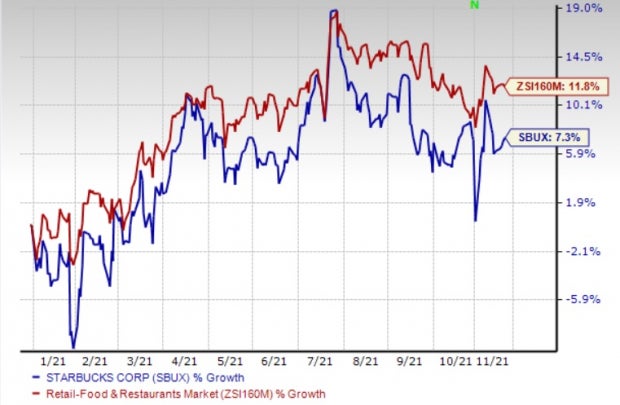 Despite an impressive sales outlook, the company’s earnings in fiscal 2022 are likely to be impacted by strategic investments and cost inflation. The expiration of government subsidies in Asia and the transition of Starbucks Korea to the licensee are likely to hurt the company’s margin in fiscal 2022. For fiscal 2022, the company anticipates non-GAAP EPS growth to be a minimum 10% from the base of $3.10 in fiscal 2021 (the figure is adjusted for non-GAAP treatment of certain integration costs and excludes the involvement of extra week). However, the figure is well below the analyst’s expectation.
Moreover, dismal Channel Development revenues continue to hurt the company. In fourth-quarter fiscal 2021, the segment’s net revenues declined 6%, following a fall of 7%, 29% and 25% year over year in the third, the second and the first quarter of fiscal 2021, respectively. The downside was primarily due to nearly 20% unfavorable impact of Global Coffee Alliance transition-related activities.