Southwest (LUV) is being plagued by persistent weakness in air-travel demand due to significant lag in business travel recovery, and rising fuel prices.

Shares of Southwest Airlines LUV have declined nearly 24% in the past six months, primarily due to adversities resulting from persistent weakness in air-travel demand and escalating fuel prices. 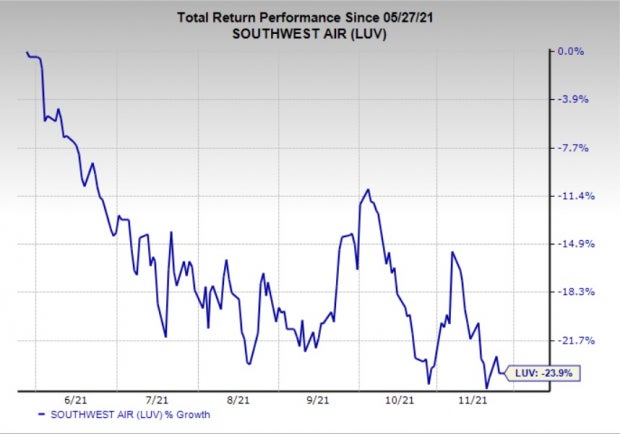 Despite improving, air-travel demand continues to be below the pre-pandemic levels. As a result, LUV is suffering substantial loss of revenues. The airline’s operating revenues have decreased 32.2% and 17% in the second and third quarters of 2021, respectively, from their comparable periods in 2019. The already weak travel demand suffered a further setback in the third quarter due to a spike in coronavirus cases induced by the Delta variant. Softness in bookings hurt Southwest’s third-quarter results to the tune of approximately $300 million. The airline estimates lingering effects from the deceleration in bookings witnessed in the third quarter to impact its fourth-quarter operating revenues by approximately $100 million. LUV expects fourth-quarter operating revenues to decline 15-25% from the comparable period’s figure in 2019.

The continued weakness in air-travel demand is primarily due to significant lag in business travel recovery. After declining in the lower 60% range in both July and August from the 2019 level, Southwest’s managed business revenues fell 73% in September. By the end of 2021, the airline expects its managed business revenues to be down roughly 60% from the comparable period in 2019.

A spike in oil prices is pushing up Southwest’s fuel expenses, which in turn is hurting its already weak bottom line. Fuel costs per gallon, including fuel tax (economic), rose 44.4% year over year to $1.92 in the second quarter. The same jumped 65.9% to $2.04 in the third quarter. LUV estimates economic fuel costs per gallon to be between $2.25 and $2.35 in the fourth quarter. Due to a spike in fuel prices as well as costs associated with ramp up in operations (to cater to the improvement in travel demand), the carrier does not expect to be profitable in the fourth quarter of 2021, as it had previously anticipated.

2 Emerging Market Stocks to Buy as the Dollar Weakens

Is Lowe’s A Buy On Pre-Earnings Weakness?

Strength Seen in Melco (MLCO): Can Its 16.6% Jump Turn into More Strength?

Get Two Drones for the Price of One