Is WEC Energy Headed for a Big Move?

An ascending triangle has emerged in the chart of WEC Energy Group, Inc. (WEC). The pattern was formed through a resistance line and an up-trending support line. If the stock...

By Christian Tharp November 30, 2021
This story originally appeared on StockNews

An ascending triangle has emerged in the chart of WEC Energy Group, Inc. (WEC). The pattern was formed through a resistance line and an up-trending support line. If the stock breaks through either level, a major move is expected. Read more to learn how to take advantage of this trade.

WEC Energy Group, Inc. (WEC) is engaged in the generation and distribution of electricity in southeastern, east central and northern Wisconsin, as well as in the upper peninsula of Michigan. The company also distributes natural gas and owns, develops, and operates coal, oil, gas, and renewable fuel-based electricity generating facilities.

In the third quarter, the company’s earnings and revenues outperformed estimates. WEC has been adding electric and natural gas customers, driven by higher demand for its services. Plus, the firm targets a $17 billion plus investment between 2022-2026 to strengthen its infrastructure and add renewable assets to its portfolio.

WEC’s balance sheet does not look favorable as the company has $2 billion in short-term debt with only $26 million in cash. Earnings have grown an average of 7.4% per year over the past five years and are expected to fall 10.5% year over year in the current quarter.

The stock also looks slightly overvalued with a trailing P/E of 21.49 and a forward P/E of 20.53. WEC was showing bearish momentum in September, but performance has been mixed since, as shown in the chart below.

Take a look at the 1-year chart of WEC below with my added notations: 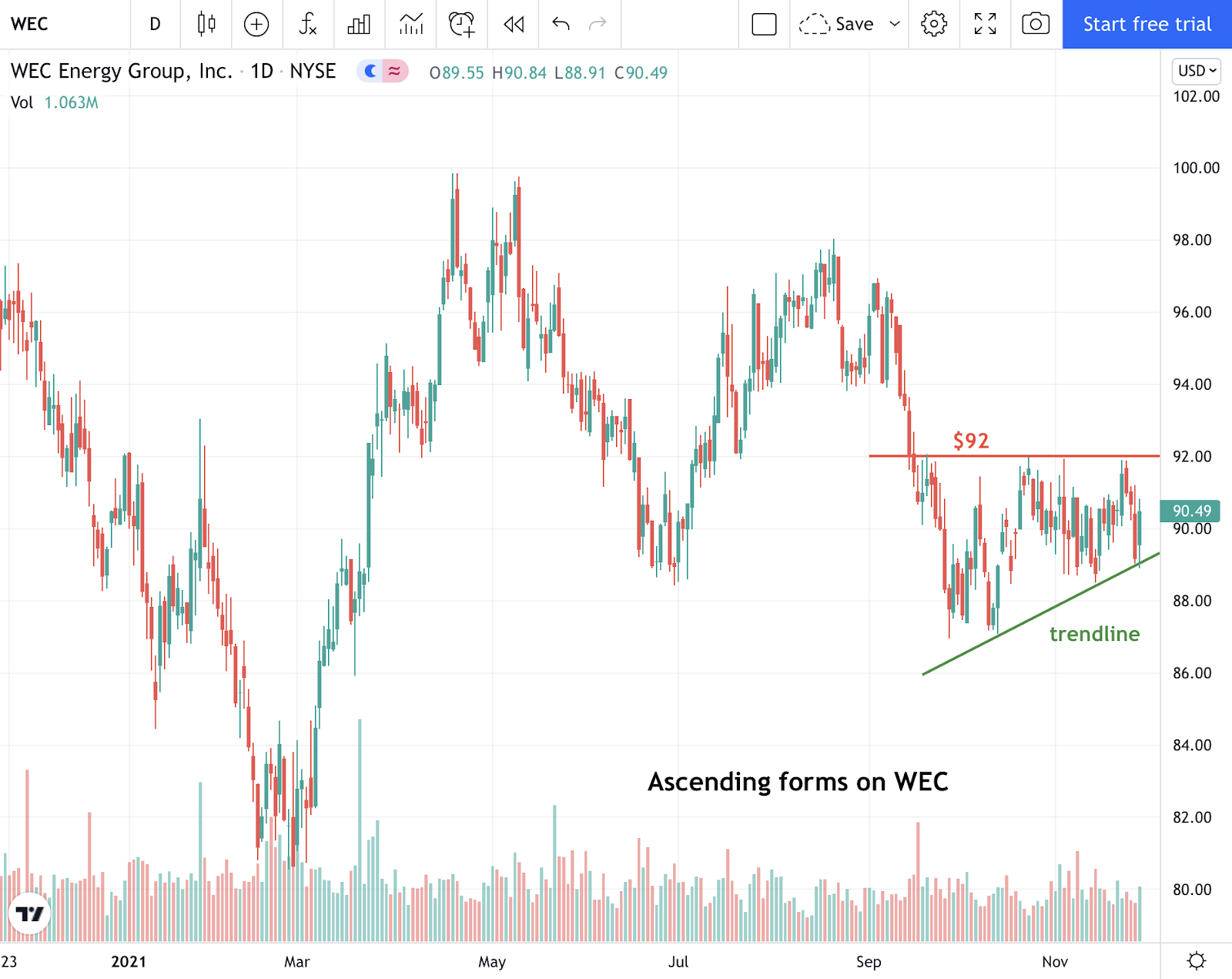 Chart of WEC provided by TradingView

WEC has formed key resistance at around $92 (red) over the past several weeks. In addition, the stock is also rising on top of an up-trending support line (red). These two lines have WEC trading within a common pattern known as an ascending triangle.

WEC shares were unchanged in premarket trading Tuesday. Year-to-date, WEC has gained 1.29%, versus a 24.82% rise in the benchmark S&P 500 index during the same period.

The post Is WEC Energy Headed for a Big Move? appeared first on StockNews.com