Price growth slowed a skosh and inventory ticked up slightly across the nation’s biggest metros in the third quarter. And while many potential first-time buyers have found their savings bolstered…

By Elizabeth Renter December 2, 2021
This story originally appeared on NerdWallet

Price growth slowed a skosh and inventory ticked up slightly across the nation’s biggest metros in the third quarter. And while many potential first-time buyers have found their savings bolstered during the pandemic, those who haven’t squirreled away a surplus will find these modest improvements underwhelming.

National averages provide a good big-picture look at what’s happening in the housing market, and in the third quarter, that story is a slight improvement over the last: Prices were down a smidgen (1%) and inventory up 22% nationwide, quarter over quarter. But homes were listed at 5.3 times the median first-time home buyer income, when three times your income is a long-standing affordability rule of thumb.

To be sure, some first-time buyers are making a successful go of it, in spite of the strong seller’s market we’ve been in for more than a year. These inaugural buyers made up 34% of all buyers from July 2020 to June 2021, compared with 31% in the year prior, according to the National Association of Realtors’ 40th annual buyer survey.

Some buyers have likely found higher personal savings rates, increased work location flexibility and super-low interest rates over the pandemic fodder for staking a claim in this seller’s market. But for those potential first-timers who haven’t reaped similar benefits, the third quarter represented yet another where prices were too high and affordable homes scant.

Affordability across the nation’s biggest metros

Across the nation’s largest metro areas, affordability remained stable in the third quarter; homes were listed at 5.5 median first-time buyer income for the second quarter in a row. This is notably higher than one year ago, when homes were listed at 4.8 times first-time buyer income. Over the past year, prices have risen considerably, though that rate of growth has begun to level off.

The most affordable metro areas in the third quarter, as usual, are in the Midwest and Rust Belt regions. They include Pittsburgh, where homes are listed at 3.1 times first-time buyer income, Cleveland (3.3), St. Louis (3.4), Buffalo (3.6) and Baltimore and Minneapolis (3.9).

First-time buyer guidance: Some mortgages can make homeownership dreams more attainable for first-time buyers who may have less set aside for down payments and shakier credit histories. But they aren’t a sure thing. A recent analysis shows denials among FHA applicants — federally backed loans popular among first-time buyers — were up in 2020, as lenders tightened standards to control the flow of funds amid high demand. FHA applicants can reduce their debt-to-income ratio and improve their credit with on-time payments to better their chances for approval. Also, they can explore other first-time home buyer programs — FHA loans aren’t the only option.

Prices dip ever so slightly

Across the largest metro areas, prices dipped a hair (1%) from the second quarter to the third, on average. This tiny decrease is one sign that breakneck price growth is slowing, though many potential buyers won’t have felt the shift. Some metros, however, saw price drops that were likely noticeable.

It’s important to note that prices have been incredibly high for over a year now, so even these double-digit drops are making up for only a small portion of the extreme increases.

Not all areas experienced the same relief. Warmer-climate markets, such as Las Vegas; Tampa, Florida; and Austin, Texas; all experienced price increases, when compared with last quarter and last year at the same time. As a matter of fact, home prices increased another 29% year over year in Austin, one of most sizzling markets in the country.

First-time home buyer guidance: Knowing what’s happening in your local market — not the national headlines — is crucial to setting expectations as you begin to shop for a home. While prices have been up and supply down across the nation, on average, your city or neighborhood may be one of many exceptions. Or, at minimum, one where these constricting extremes aren’t as severe. Talk with local real estate agents about what they’re seeing in the areas you’re eyeing. Ask specifically about homes for sale in your price range — how long they’re staying on the market and how many offers they’re getting, on average.

Inventory up, in many markets

The high list prices are no doubt luring home sellers into the market, and we saw the number of active listings climb 31% compared with last quarter. This is particularly notable as we typically see home listings begin to wane in the third quarter, as home-buying season subsides and cooler weather moves in. However, for the second year in a row, the homebuying season was anything but typical.

Some metros saw quarterly increases big enough that hopeful buyers would notice their options expanding. Thirteen metros saw inventory rise 40% or more. Available homes in Austin, known for topping lists in this analysis, rose 73%. Hartford, Connecticut, is the only metro that saw a double-digit decrease; the number of active listings there fell 25% on the quarter. 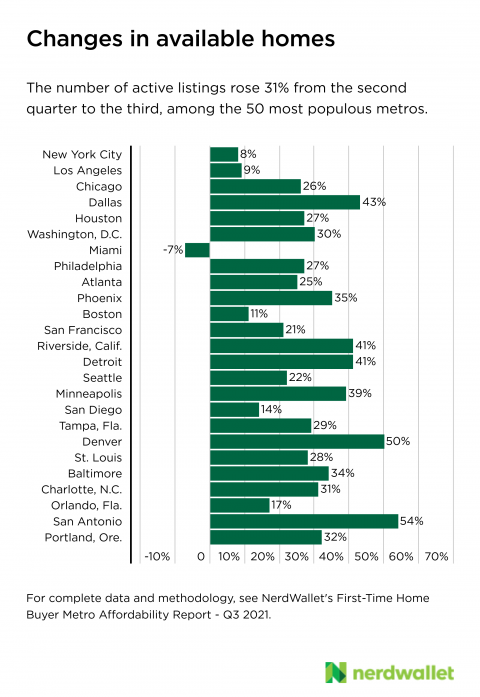 First-time home buyer guidance: We’re still in a heavily tilted seller’s market, so buyers shouldn’t get overly optimistic if they’re seeing more active listings in their area. But when there are more houses on the market, competition eases slightly. As a first-time buyer, you still can’t expect to have your first offer accepted — supplies are still at a deficit. However, if you can stomach going elbow to elbow with other buyers — moving quickly and making competitive offers — you may get under contract somewhat sooner than you would’ve last year, or even a few months ago.

If you’re shopping for a home in Milwaukee, you’re better off than most urban house hunters. This metro area has consistently gotten more affordable in 2021, moving from the 16th most affordable metro in the first quarter, to the ninth most affordable in the third. Homes were listed at four times the median first-time buyer income in this most recent quarter, at a time when inventory climbed significantly.

List prices fell 10% from Q2 and 21% from Q3 2020, more than any other metro analyzed. While the number of active listings is roughly on-par with last year at this time — growing just 3% — they’re up 69% over last quarter. For home shoppers, this means seeing a noticeable increase in the listings returned when they search their favorite app, compared with what they saw in early summer.

Analysis methodology available in the original article, published at NerdWallet.