Jacob & Co | Brand Spotlight Partner What is this?

Long before disruption became one of the most overused terms in business, Jacob Arabo was disrupting the Swiss watch industry by creating timepieces that were never dreamed of before, much less realized.

Jacob Arabo founded Jacob & Co. in 1986 as a jewelry brand and became quite successful, developing an international reputation for selling luxury jewels to some of the most popular entertainers in the world as well as royalty and business leaders. However, from the time his father gave him a watch at the age of 13 he wanted to create high-end timepieces. Switzerland, the center of the watchmaking world is where he went. However, at first, things didn’t go as planned.

‘The Swiss watch industry is a very traditional business, and my ideas don’t conform with the norm,” Arabo says. “The vendors in Switzerland wouldn’t work with me.”

So, he went home and created a quartz watch that didn't need the Swiss. It was called the Five Timezone watch, where the look of the watch can be changed with different bezels and straps. It became a huge hit with his famous clients and led a trend in the watch industry. Today even the most historic and prestigious Swiss watch brands commonly create timepieces with interchangeable straps and bracelets. 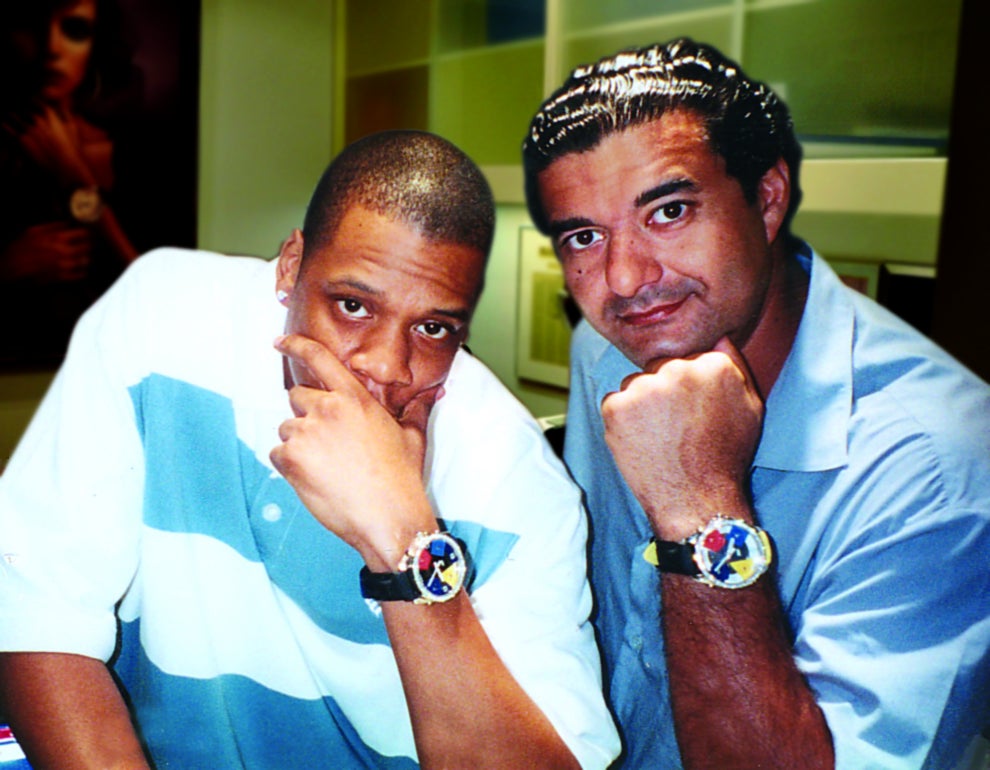 Undeterred by his first attempt to enter the Swiss watchmaking industry, in 2007 he returned to Switzerland where he founded Jacob & Co. SA, based in Geneva. This time, thanks to his success with the Five Timezone watch, he received a better reception and he was able to find watchmakers and suppliers to build the watches he envisioned, although it still wasn’t easy, since he was constantly being told the watches he envisioned were impossible to make.

But Jacob Arabo persisted and it paid off.

“I’m not from the Swiss watch industry, so I come with a perspective that is new and different, Arabo says. “A lot of watch brands are bound by their heritage. I’m a contemporary watch and jewelry designer and I’m not bound by anything. I’m also willing to spend the money to achieve my vision.”

His first Swiss-made timepiece in 2007 was the Quenttin, the first watch ever made with a vertical tourbillon and a 31-day power reserve. It was a hit and launched Arabo’s career as a watchmaker.

What followed was a list of trailblazing timepieces. In 2013 Jacob & Co. unveiled the Epic SF24, a world time zone timepiece with a patented mechanical retro-style split-flap system that displays the time in 24 cities around the world. 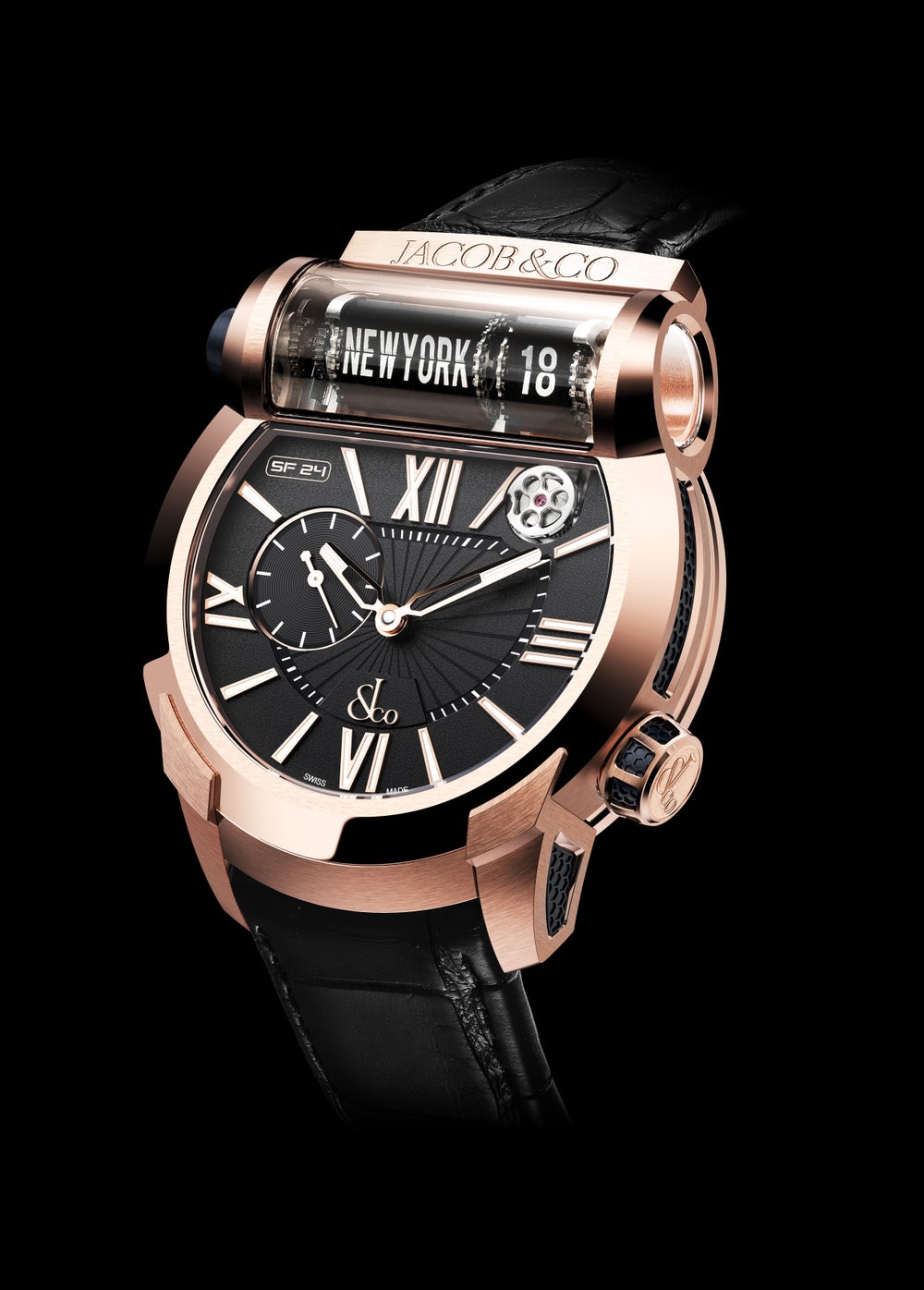 Less than a year later Jacob Arabo created what was to become his most important timepiece: the celestial themed Astronomia Tourbillon. It featured an exposed four-arm vertical movement that rotates around a central gear and four exclusive satellites, each rotating on its own axis.

“The Astronomia revolutionized high watchmaking, '' Arabo says. “We took what had been a flat tourbillon and made it vertical, and made it turn around the dial. Still, however, it is rooted in traditional watchmaking. We took traditional Swiss watchmaking and turned it on its head.”

The Astronomia also proved to be quite versatile. Many versions of the watch have been created with a myriad of celestial scenes, multiple functions, and even art versions with gold sculptures of animals, mythological creatures and historic buildings.

Jacob & Co. functions became more complex as well. In a novel partnership with Paramount Pictures, Jacob & Co. released the Opera Godfather, a musical watch that plays the theme of The Godfather movie on demand. It is combined with iconography from the film and a host of other functions. This was followed by the Opera Scarface musical watch, which pays homage to the famous movie starring Al Pacino. 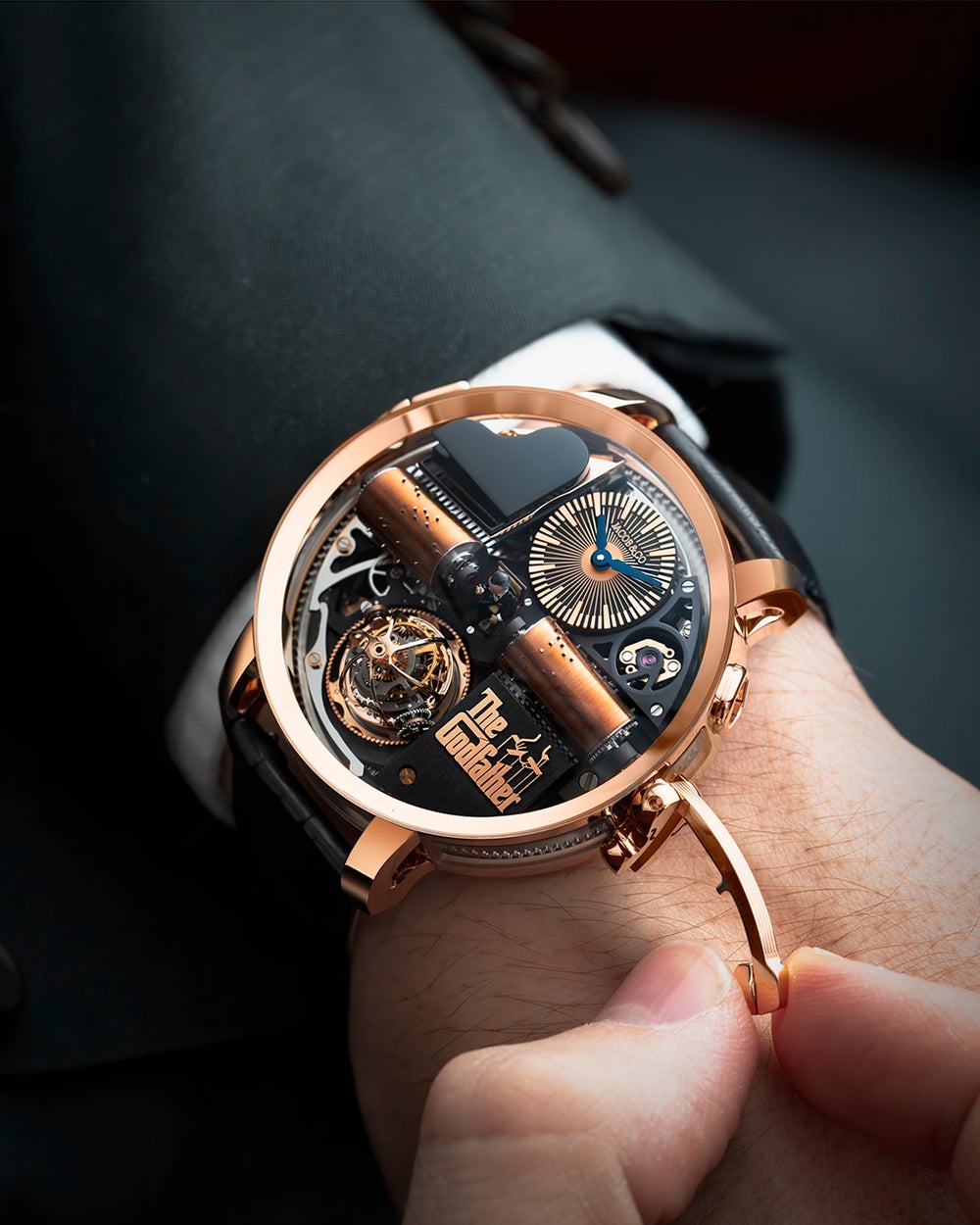 A year later Jacob & Co. partnered with hyper sports car manufacturer, Bugatti, “to create the Bugatti Chiron Tourbillon, the first luxury watch in history to have a fully working replica of the Bugatti W16 engine. Activated on demand, the “engine” comes to life, replicating the thrill of high-speed auto racing.

In each case, Arabo was repeatedly told that his timepieces couldn’t be made, so he had to work hard to find Swiss watchmakers willing to turn his unusual ideas into reality. 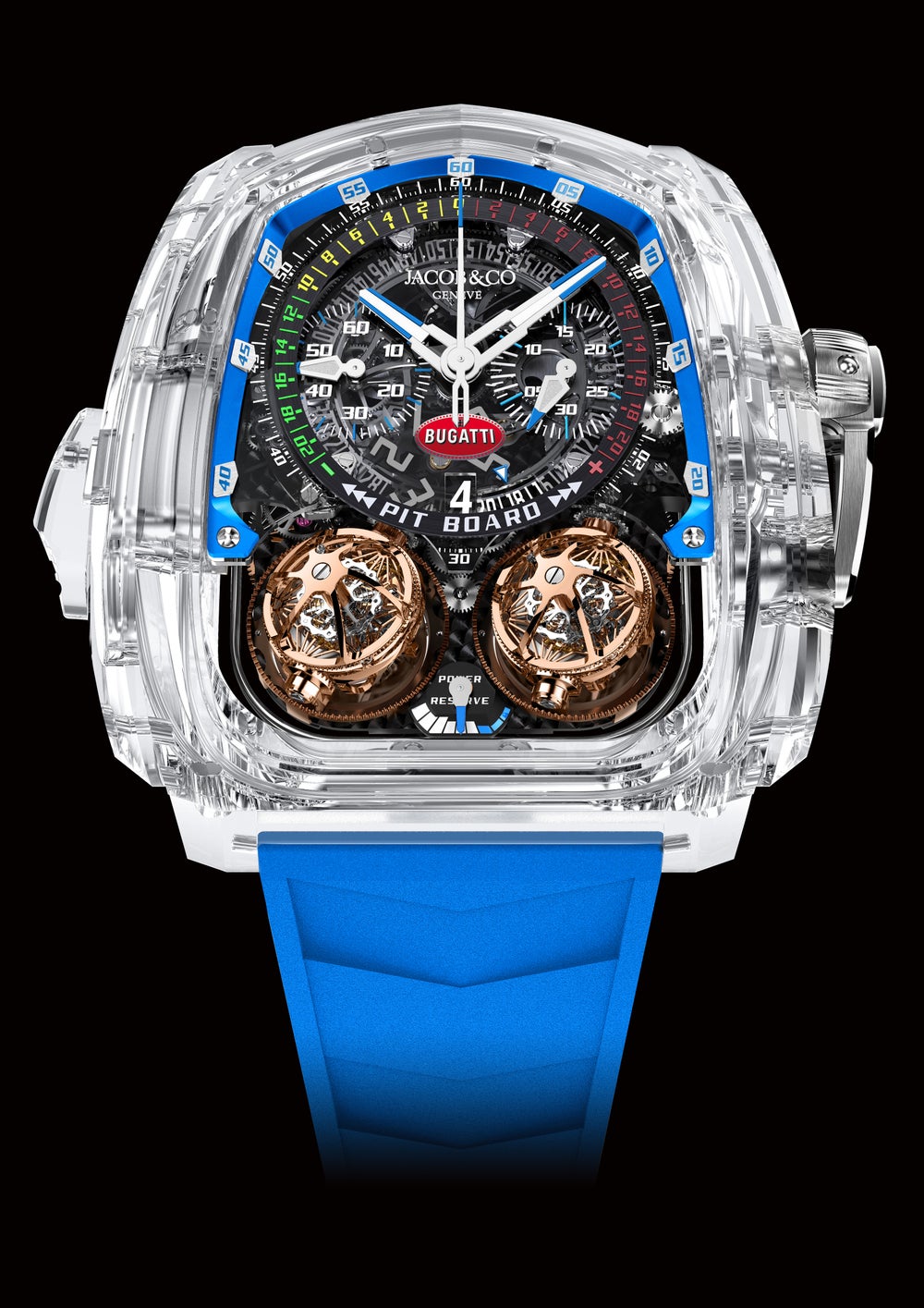 “I think I am fortunate I approach watchmaking as a watch lover, not a watchmaker. I don’t worry about whether it can be done, I just imagine what my clients and I would be excited to own. Then, I approach the watchmakers and they tell me it is impossible. Then I tell them to try and try and keep trying, and we finally figure out how to do it.”

Arabo continues, “My watches carry the Swiss Made label. I spend upwards of two weeks per month in the Geneva office. I make the sketches then designers in Geneva create 3D drawings using computer-aided design. The craftsmen make the designs come to life. For sourcing and executing diamonds and gems I often turn to gem cutters and setters in Israel. Very few gem cutters are capable of creating the Jacob Cut diamond (a spherical gem with 288 facets) and they are all based in Israel.”

He adds that because of the complexities, creating a Jacob & Co. could take years to design and produce.

Arabo used the Astronomia as an example. “I wanted to create a stage for a timepiece, so I created a design that combined the case and dial. I created an oversized case with an exceptional sapphire crystal on the top and sides. This provided an unobstructed view of the dial/case. Today you don’t need a watch to read the time, so watches need other functions. For this stage, I created a caliber unlike any other. In its most basic form, it is a vertical movement with four extended arms. Each arm has a unique complication, exclusive to Jacob & Co. that rotates on its own axis: A magnesium and hand-lacquered globe of the earth, the Jacob Cut diamond, a triple-axis gravitational tourbillon, and a subdial for the hours and minutes. Each complication requires exceptional craftsmanship. Also, all of the complications have to be identical in their weight or else the movement won’t function. This is another example of superb craftsmanship.” 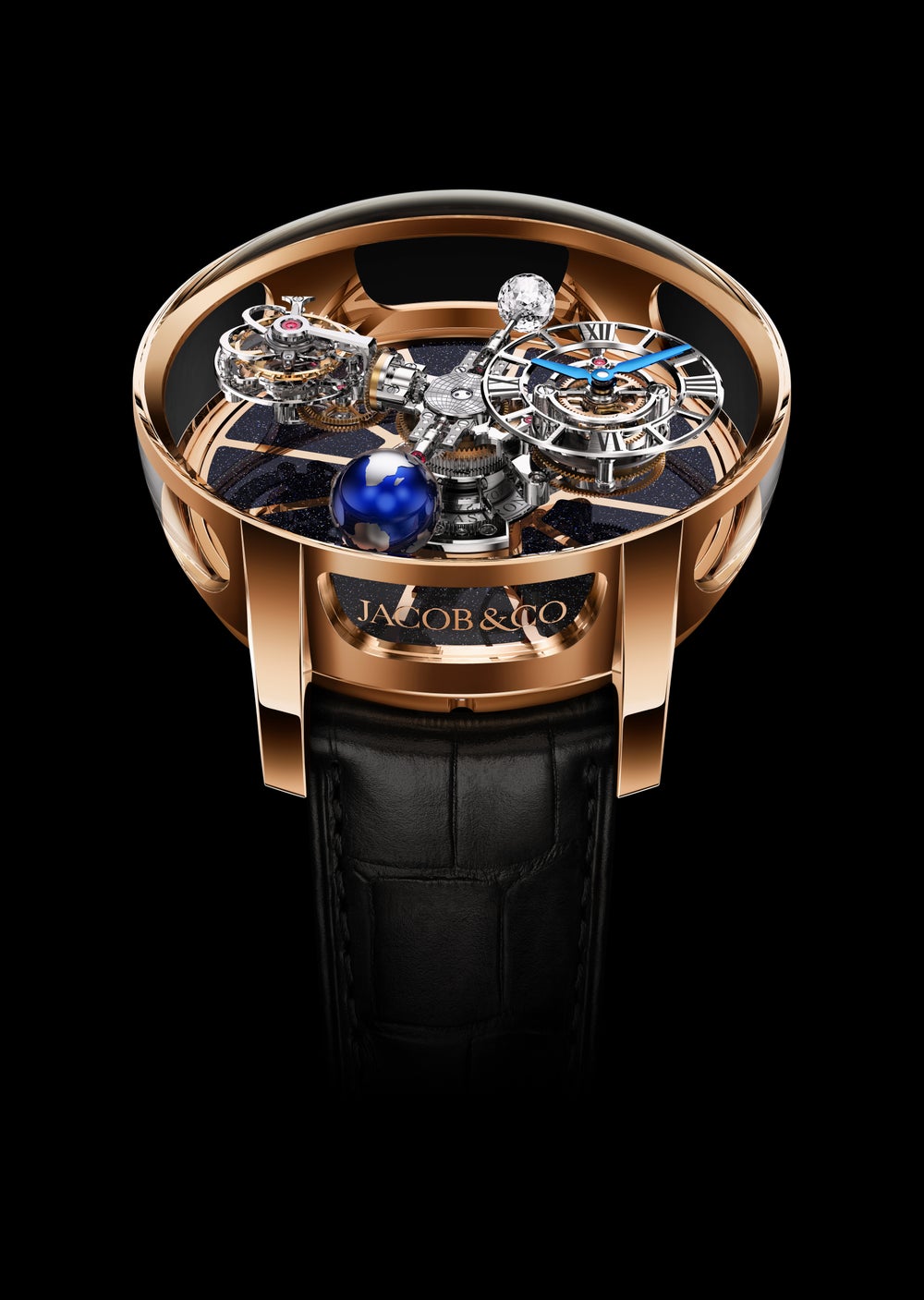 Jacob Arabo’s acceptance as a Swiss watchmaker was boosted in 2019 when three Jacob & Co. watches were selected as finalists for the prestigious 2019 Grand Prix d’Horlogerie de Genève (GPHG), considered the Oscars of the Swiss watchmaking world. In 2020, four Jacob & Co. watches were named as finalists. Arabo also was named a member of the GPHG Academy.

Jacob Arabo went from being an outsider among Swiss watchmaking to an enigma making timepieces that few in the industry understood, to being an integral part of the industry. His creativity is without question. But he says his most important attribute is his persistence. This was demonstrated by first gaining acceptance in the Swiss watch industry and then convincing Swiss watchmakers that his ideas can become reality.

“My superpower is willpower,” Arabo says. “When you have willpower, you can do anything.”