Bank of Montreal BMO is interested in acquiring BNP Paribas SA’s BNPQY U.S. banking unit, Bank of the West. The news was reported by Bloomberg, citing people familiar with the matter who asked not to be identified as the discussions were private.
Per people with knowledge of the matter, the Canadian lender has held initial talks, discussing the buyout of the Bank of the West in a bid to expand presence throughout the western United States.
Based in San Francisco, Bank of the West has been a subsidiary of BNP Paribas since 1979. Bank of the West, with almost $105 billion in assets as of Sep 30, 2021, and 537 retail banking locations in Western United States, has been a key source of stable funding for the French bank.
Last month, Bloomberg reported that BNP Paribas was working with advisers to explore a potential sale of the U.S. retail unit. Being Europe’s biggest bank by assets, a sale of the U.S. unit could pave the way for an acquisition in Europe or Asia for BNP Paribas. Alternatively, the French bank could also use the sale proceeds for higher capital returns to shareholders.
However, people with knowledge of the matter said that currently discussions are going on and there is no certainty that the deliberations will lead to a deal.
Representatives for both BNP Paribas and Bank of Montreal have not commented on the matter yet.
Over the past year, shares of Bank of Montreal have gained 41.8%, while the same for BNP Paribas has gained 20.6%. The industry to which they belong has rallied 9.8% over the same time frame. 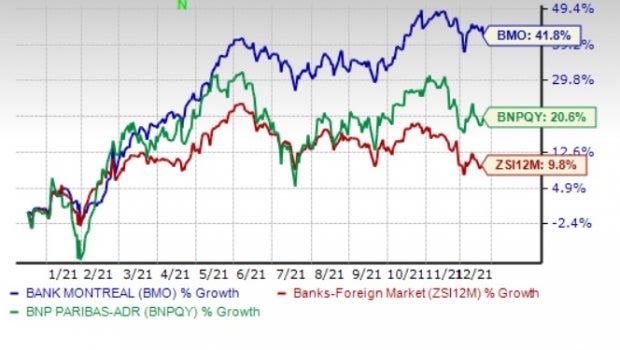 Currently, Bank of Montreal and BNP Paribas carry a Zacks Rank #3 (Hold). You can see the complete list of today’s Zacks #1 Rank (Strong Buy) stocks here.
Of late, Canadian lenders have been showing interest in the U.S. banking markets. Banks in Canada are seeking to expand in the United States because of lack of robust growth potential in their own banking markets.
Notably, there has been a rise in mergers and acquisitions in the United States. Particularly, U.S. banks have been engaging in consolidation efforts to counter the low-interest-rate environment along with heightened costs of investments in technology.
A couple of days ago, SVB Financial Group SIVB acquired a New York-based independent sell-side research firm, MoffettNathanson LLC, in a bid to continue with its efforts of expanding into technology investment banking.
Greg Becker, the president and CEO of SVB Financial, stated, “The MoffettNathanson team has built an incredible reputation as a leader in equity research. The addition of technology equity research is another important step in further solidifying our place as the essential partner to innovation economy clients. I’m proud to welcome the MoffettNathanson team to SVB and continue to strengthen the capabilities of our investment banking practice.”
United Bankshares, Inc. UBSI also announced the completion of its merger deal with Community Bankers Trust Corporation. This June, United Bankshares entered an all-stock deal to acquire Community Bankers, the parent company of Essex Bank.
The buyout has brought together two high-performing banking companies. It bolsters United Bankshares’ position as one of the largest and best-performing regional banking companies in the Mid-Atlantic and Southeast. The combined entity will now operate across 250 locations in opportunistic markets in the United States.

Is Pinduoduo a Good Chinese Commerce Stock to Buy for 2022?