Gold Makes A Bullish Move: Here’s Why That Could Continue

The gold price has faced stiff resistance at $1,800 an ounce for some time, but it finally broke through that level on Friday. It came close several times on Thursday...

By Michelle Jones December 17, 2021
This story originally appeared on ValueWalk

The gold price has faced stiff resistance at $1,800 an ounce for some time, but it finally broke through that level on Friday. It came close several times on Thursday following the Federal Open Market Committee meeting on Wednesday, but today's move above the psychological $1,800 an ounce level is an important move for gold.

Kitco says it's too early to call today's move a breakout yet due to traffic above the current level. A review of the four-hour chart shows the gold price trading higher than the volume point of control, a critical level for the yellow metal because it is the most-accepted price for the period.

The volume point of control could even become the new support level. However, Kitco also identified minor levels at $1,815 an ounce and $1,836 an ounce.

The gold price is now on track for its best week since the middle of last month amid a weakening U.S. dollar following the Federal Reserve's decision to pull its stimulus. As a result, gold is now cheaper in currencies other than the dollar. If the yellow metal does post a gain this week, it would be its first gain in more than a month. But the relief may only be temporary.

In an email on Friday, Craig Erlam of OANDA noted that gold was taking the news about central banks tightening their monetary policies and tacking inflation head-on well.

"You would be forgiven for thinking this would be a negative development for the yellow metal and, in the longer term, I expect it will be," he said. "But it's also a development that was almost entirely expected and priced in. So we may be seeing some profit-taking on the pre-meeting moves, which is pulling yields a little lower and weighing on the dollar. This should be a short-term relief move, although that may depend on what the omicron data tells us in the coming weeks."

Shift Toward Risk Aversion To End The Week

It should also be noted that today marks the fourth quarter's triple witching for the gold price, which is undoubtedly playing a role in the day's upward momentum for the yellow metal. Triple witching occurs four times a year when index futures and index and stock options all expire on the same day, and Kitco notes that such an occurrence often comes with increased volatility.

Meanwhile, investors started to take up risk-averse positions on Friday, seeking out safe havens like gold as anxiety creeps in to close out the week. U.S. stock indices jumped immediately following Wednesday's FOMC meeting, but then stock movement on Thursday and Friday indicated that investors have realized that they're facing a triple threat of rising interest rates, inflation and resurging COVID cases.

In an email on Thursday, Edward Moya of OANDA pointed out that gold received a boost from the weakening of the dollar and the flattening of the Treasury yield curve.

"Risk aversion is hitting the Nasdaq, and that has some traders going into cyclicals, while others are buying safe havens such as gold," he added. "If Wall Street is ready to abandon the short-term call for dollar dominance, gold could easily make a run back towards last month's high over the next couple of months."

Moya believes investors will be watching the data on infections with the omicron variant of COVID and that the data will be important for the safe-haven trade in the next few trading days. If the number of deaths starts to surge in South Africa, it could signal that omicron will be more of a concern to the global economy than initially thought.

"The number of short-term risks remain elevated, and that could ultimately lead to further inflows to gold now that much of Fed tapering and the initial rate hikes have been fully priced in," Moya said.

One Other Consideration For Gold

While the dollar and the yield curve have proven to be significant factors driving the gold price, the World Gold Council pointed out another less-talked-about factor. In search of yield, investors have shifted to less liquid investments, but allocating some of the portfolios to gold increases its liquidity while improving its performance during this uncertain time.

Interestingly, the World Gold Council found that global portfolio composition has continued to shift as investors allocate more and more of their portfolios to alternatives. Interest rates have been ultra-low for years, but even as the world's central banks prepare to raise their rates, investors are still allocating larger and larger percentages of their portfolios to alternatives.

A survey conducted by Coalition Greenwich found that investors expect to allocate a third of their portfolios to alternatives or other assets over the next three years. 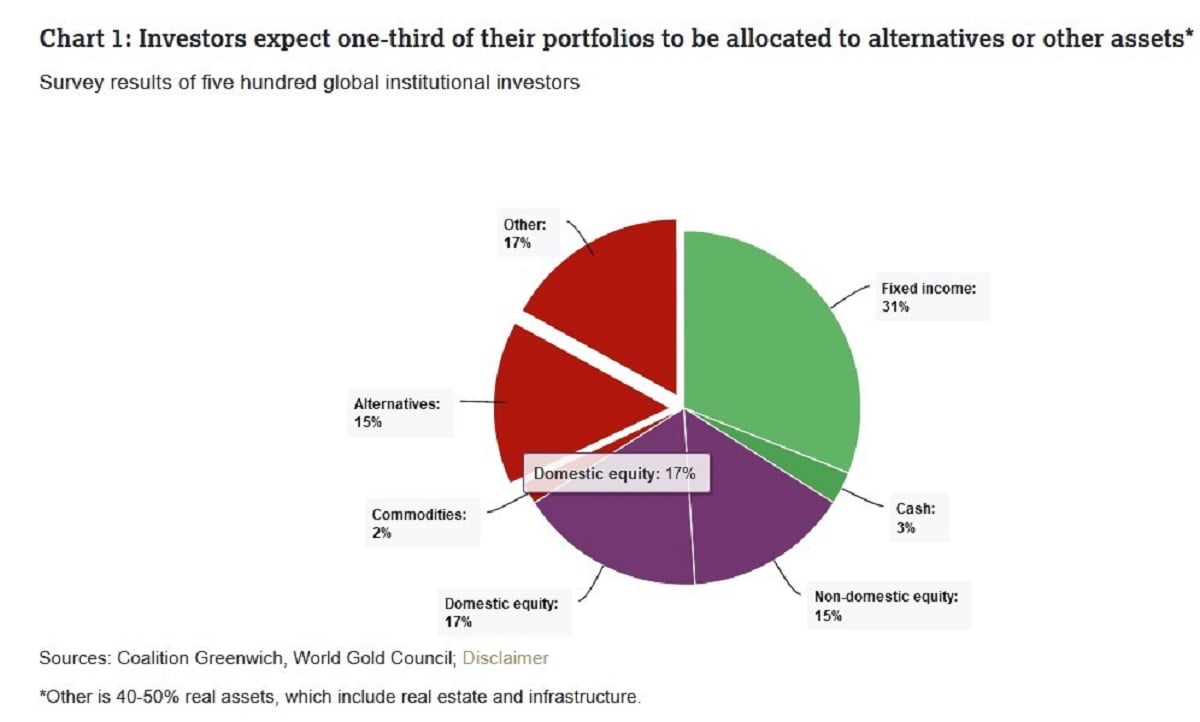 However, while these alternative assets have been improving performance, they also reduce liquidity in a portfolio.

How Gold Can Help A Portfolio

The World Gold Council pointed out that private-market strategies typically run for longer terms and have illiquidity premiums. Since they aren't marked-to-market as often as publicly-traded stocks, their true volatility and valuation can be understated, creating a problem when markets enter risk-off environments like the one we are starting to see today.

Liquidity becomes even more important when a portion of a portfolio is allocated to even more volatile assets like cryptocurrencies. However, the World Gold Council argues that gold can help these issues. For example, it pointed out that volatility in the gold market is low compared to that of other assets, second only to commodities. 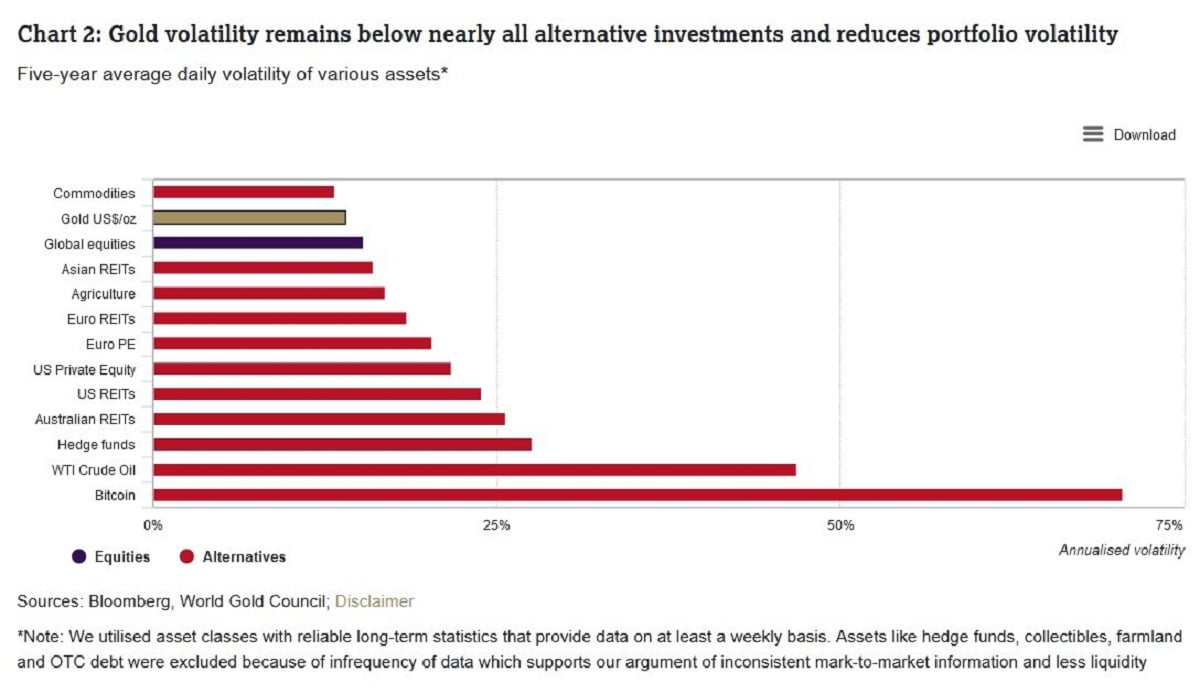 The World Gold Council also said the yellow metal offers the capital and liquidity investors need when the market sells off. Gold trades over $100 billion daily, including through highly accessible venues like gold-backed exchange-traded funds and gold futures, which represent $57 billion daily. Only U.S. Treasuries and the S&P 500 have higher one-year trading volumes. 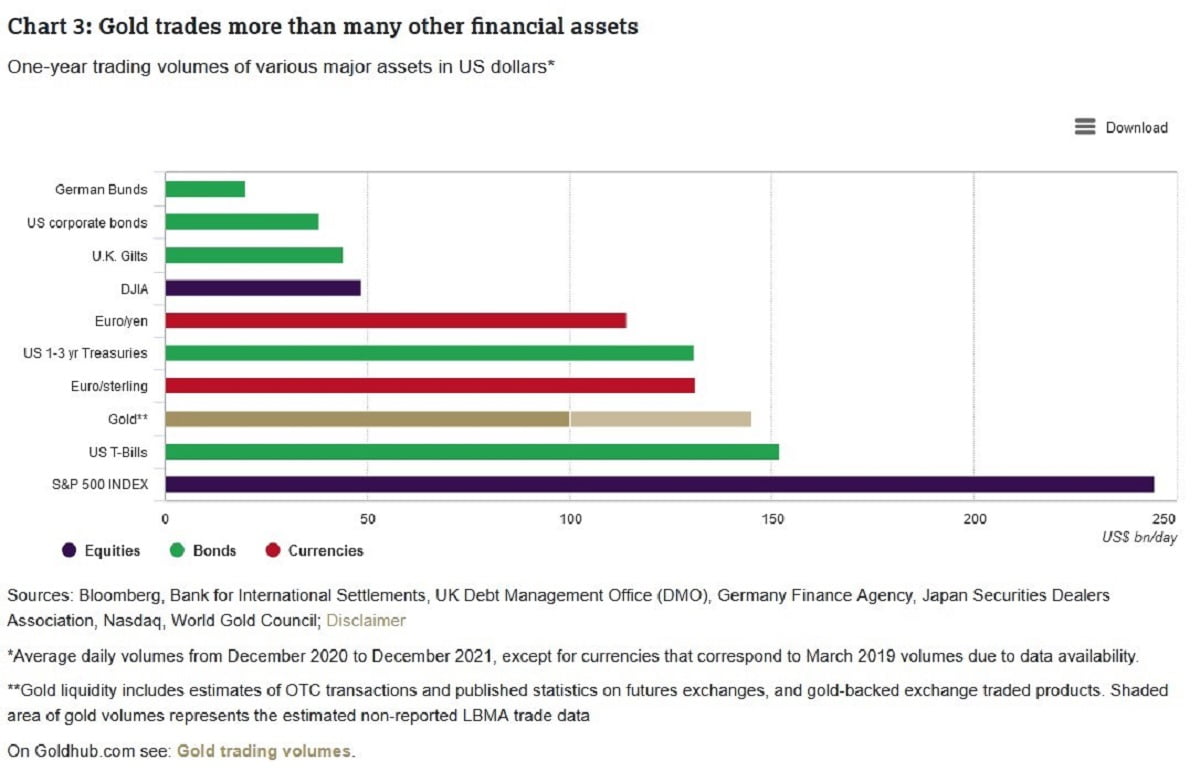 The World Gold Council added anecdotally that one question it frequently hears in the early days of a sharp selloff in the market when gold pulls back too is, "Why isn't gold higher?" The organization explained that some profit-taking occurs in such a situation due to gold's strong liquidity. However, it added that the yellow metal usually bounces back quickly.

The World Gold Council also demonstrated how gold improves a portfolio's liquidity and volatility using the COVID market selloff in March 2020. When the market crashed, gold plunged 12% peak to trough over seven trading days, but it recovered later to end the month flat. On the other hand, the S&P 500 ended the month down 13%, while hedge funds lost 5%, and listed private equity plummeted 29%.

The council added that in this scenario, gold would have decreased the overall volatility in the portfolio. Further, using the yellow metal to establish positions in certain distressed assets would have resulted in a meaningful boost to 2020 returns. Although many assets ended 2020 significantly higher, gold was up 25%.