By Faizan Farooque December 20, 2021
This story originally appeared on InvestorPlace

The price of Shiba Inu (CCC:SHIB-USD) is volatile. However, it’s still possible to make an informed decision about whether or not you should invest in this cryptocurrency. Unless there are sustainable gains, at less than 1 dollar per SHIB-USD coin, your hard-earned money could be gone before even realizing any return on investment. 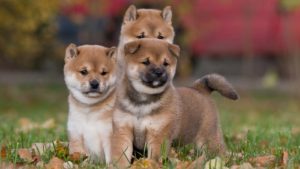 There’s a reason why the cryptocurrency known as Shiba Inu has yet to rise above $1. It was launched in August 2020, but the token has been no real-world utility or any value-proposition put forward at all.

That being said, the token has some strong features: you can buy and sell it on the open market, and earn passive income from staked SHIB-USD. In addition, 500 merchants accept this currency, setting it apart from other coins that do not have enough merchant partnerships.

Shiba Inu has more than 1 million investors, and they’re committed users. They’ve become part of what some call the “ShibArmy.” This group supports their favorite crypto play at all times. This makes Shiba Inu similar in many ways to meme stocks.

Investors are trading on positive momentum more than anything else. Shiba Inu has had a dream run this year, fueled largely by speculation. However, it cannot repeat its performance in the coming year unless it improves upon functionality.

Cryptocurrencies are all the rage these days, but their values depend on supply and demand. As with other assets, prices tend to go up when there is limited circulation or increased desire. Bull are waiting patiently for current prices to increase again — not too quickly, though, because this could cause another bubble.

Shiba Inu’s supply is exceptionally large, 549 trillion coins. However, the enthusiastic online community that supports the token — known as “the SHIBArmy”– could spur increased demand if the crypto becomes popular among blockchain enthusiasts and traders alike. Much, however, will depend upon whether Shiba Inu can increase the number of use cases.

Shiba Inu operates on the Ethereum (CCC:ETH-USD) blockchain. With the Ethereum 2.0 upgrade in 2022, demand for Shiba Inus should increase significantly. The major update will make transactions faster and more affordable and ETH-USD bulls will have a field day when it occurs.

This new development could boost Shiba Inu’s profile. Consequently, the shift might encourage more merchants to start accepting payments in the form. Nevertheless, the Holy Grail for SHIB-USD remains a listing on the Robinhood (NASDAQ:HOOD) platform.

More and more people already recognize the cryptocurrency. But it could take off with an appearance on Robinhood. The app has up to 22.4 million users who easily invest in stocks/shares through their phone’s browser interface without any previous knowledge or investment experience whatsoever!

Elon Musk’s tweets about his pet Shiba Inu have enabled SHIB holders to create massive wealth over the past year, even though Musk does not own the token. It is tough to predict what he will do next. However, he remains a factor in Shiba Inu’s success.

Nothing Is Set in Stone

No one can say for sure it’s too late to buy Shiba Inu. It all depends on what happens with the cryptocurrency.

SHIB-USD had an amazing year. Despite losing steam in the final portion of the year, the crypto has made several multimillionaires this year. But if they could repeat their performance from just one year ago, the market cap would exceed that of the ten biggest publicly traded companies combined. Of course, that is unlikely to happen anytime soon.

There is a sense that Shiba Inu will experience the same fate as other cryptocurrencies in recent months. What’s unclear is when the dropoff will occur. Therefore, investing in SHIB-USD feels a bit like gambling.

Invest Your Lunch Money but Nothing Else

For several investors, this year was chockful of anxiety as meme stocks and cryptos combined to throw the standard investing playbook out of the window. The usual technical indicators are no match for the latest Elon Musk tweet. Nor are they any match for passionate Redditors with “diamond hands.”

However, the basic facts of investing don’t change just because of an unusual year. You might feel saddened if you did not take advantage of meme coin mania or elated if you caught the trend at the right time. But investing is essentially the buying and selling of an asset. You want to purchase something of value. Unfortunately, you cannot say that SHIB-USD has any value  at this stage.

On the publication date, Faizan Farooque did not have (either directly or indirectly) any positions in the securities mentioned in this article. The opinions expressed in this article are those of the writer, subject to the InvestorPlace.com Publishing Guidelines.

Faizan Farooque is a contributing author for InvestorPlace.com and numerous other financial sites. Faizan has several years of experience in analyzing the stock market and was a former data journalist at S&P Global Market Intelligence. His passion is to help the average investor make more informed decisions regarding their portfolio. You can check out his analysis on InvestorPlace and TipRanks.

PerkinElmer (PKI) to Post Q4 Earnings: What's in the Cards?

7 Ways to Make the Most of Your Long Commute