The Best Way To Buy A Beaten Down Best Buy

BBY stock is at yearly lows even after an earnings beat. Time buy and oversold and underloved Best Buy.

By Tim Biggam December 23, 2021
This story originally appeared on StockNews

BBY stock is at yearly lows even after an earnings beat. Time buy and oversold and underloved Best Buy.

Shares of Best Buy (NYSE:BBY) are finally firming after reaching new lows. This was even after an earnings report that beat on both the top and bottom line. EPS came in at $2.08 versus expectations of $1.91. Revenues of $11.91 also topped forecasts of $11.58 billion. Same store sales rose 2% compared to company guidance of flat to down 3%. The combination of a sharply lower stock price with better earnings makes it time to buy Best Buy.

Best Buy is a B rated stock with a Buy rating. It is in a B rated Industry and checks in well above average at 17th out of 45 stocks in the industry. Value and Momentum are both B rated as well. 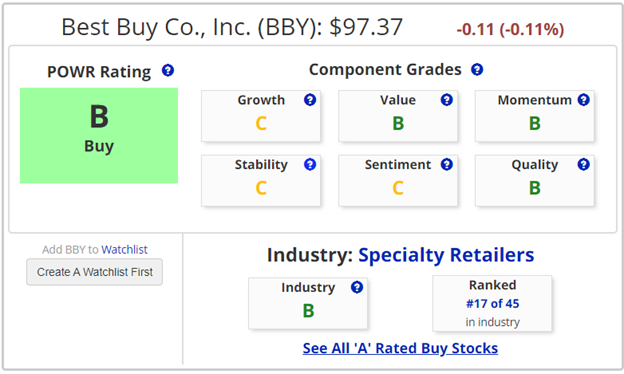 Valuations have come down sharply over the past month as BBY stock fell. Current P/E is now back below 10x. P/S stands at just .48x. Certainly cheap is an understatement, especially when compared to the S&P 500 multiples of roughly 23x and 3x.

The technical have improved greatly for BBY. 9-day RSI reached oversold reading below 20 but has firmed. MACD got to the most bearish levels of the past year but is poised to generate a new buy signal as it nears positive territory. Bollinger Percent B also dipped into negative territory but has since strengthened. Best Buy is trading at a big discount to the 20-day moving average but has begun to close the gap.  BBY stock held major support at the $96 level.

The last time all these indicators aligned in a similar fashion was in early March (highlighted on the chart). This proved to be a prescient time to take a bullish stance on BBY stock. Shares rallied over 20% in the next several weeks and held on to those gains for the next several months.

Seasonality certainly favors buying Best Buy near current levels. December has been the worst performing month over the past 20 years. BBY has been positive only 25% of the time in the past two decades with an average loss of 3.6% for the month of December. 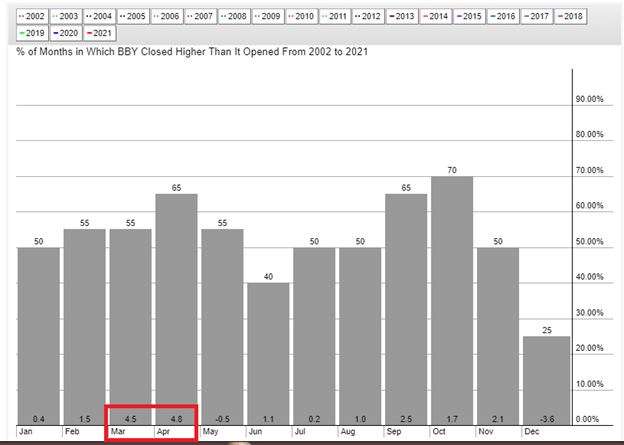 Now that December is winding down, Best Buy shares are entering into the strongest 4 months of the year on a historical basis. March and April have been the top two performing months with gains of 4.5% and 4.8% respectively. January and February have been positive as well.

Implied volatility (IV) is at the 53rd percentile. This means option prices are about average, favoring spread strategies. So to position to be a buyer of BBY, a simple call debit spread makes sense. The spread strategy lowers the initial risk while still allowing for considerable gains.

How To Trade A Debit Spread

Maximum risk on the trade is the premium paid of $240 per spread. Maximum gain is $260 if BBY closes above $100 at June expiration. Potential return on risk is 108%.

Going out to June captures the outperformance of March and April.

If you’re looking for the best options trades for today’s market, you should check out our latest presentation How to Trade Options with the POWR Ratings, where we show you how you can consistently find the top options trades.

The post The Best Way To Buy A Beaten Down Best Buy appeared first on StockNews.com