InvestorPlace - Stock Market News, Stock Advice & Trading Tips Twilio is selling at a bargain level for a cloud software company. Twilio may still be in growth mode, albeit... 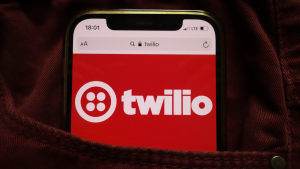 So, even though it’s down over 36% from its peak on Feb. 8, the stock is still up very significantly, about 1.76 times, from its price two years ago.

So here we have a situation where a fast-growing company (more on this below) is up 176% from two years ago but down 118% from the end of last year. So, if you held for two years until now, your average annual return on investment (ROI) has been about 66% annually for the past two years. But if you have been a shorter-term holder, there is a huge likelihood you have a loss in the stock.

As a result, this might present a good opportunity for value seekers to get in at a trough price for TWLO stock. Let’s look at its growth and valuation.

Twilio recently reported on Oct. 27 its revenue and earnings for the third quarter, showing that revenue had spiked 65% year-over-year (YoY) to $740 million. Moreover, the cloud software company says that it now has over 250,000 “active customer accounts.”

So it looks to be growing sequentially at about 12% on a quarter-over-quarter (Q0Q) basis. Therefore, at that rate Twilio should produce 57% revenue growth on an ongoing basis annually. Therefore, the Q3 65% YoY growth rate looks sustainable going forward at a 57% or higher rate.

However, Twilio said fourth-quarter revenue would be around $760 to $770 million. Although this represents a potential 39% to 40% growth over last year, it is not more than 3.35% over the Q3 numbers. This is at the midpoint of the guidance numbers.

In other words, growth could be decelerating. This might be expected since it is very difficult for a company to continue growing at a 65% rate for a long period.

This could also be one of the very reasons why TWLO stock has come down so far off of its peak prices.

Although Twilio reported a non-generally accepted accounting principles (GAAP) operating income of $8.2 million it had a non-GAAP loss of 26 cents per share. For the nine months ending Sept. 30, its operating loss was $19.9 million.

In addition, after capital expenditure (CapEx) spending of $35.9 million, the free cash flow (FCF) loss was $55.8 million. Simply put, the company is still bleeding cash, despite its positive operating income.

However, FCF at the end of Q2 was positive $4.383 million on a cumulative basis, according to my calculations. This means that during Q3, FCF turned severely negative. My analysis shows that FCF was negative $60.18 million. That downturn also probably helped push TWLO stock lower.

Where This Leaves TWLO Stock

Analysts still expect revenue to hit $3.65 billion, or 31.8% over the forecast revenue of $2.77 billion for 2021. In other words, growth will roughly be one-half of the rate that it has been in the past several quarters on a YoY basis.

Nevertheless, at the growth rate, the company could end up becoming FCF positive. If that happens the stock could rise significantly from here.

This also coincides with other analysts’ predictions. For example, TipRanks reports that 19 analysts have written on TWLO stock in the last three months. Their average 12-month price target remains quite high at $421.76, or 52.3% over today’s price of $276.92.

The bottom line here is that Twilio stock looks like it will be a winner over the next year. It could end up being a bargain price here if the price rebounds based on the company’s forecast growth.

The post Twilio Is Selling at a Bargain Level for a Cloud Software Company appeared first on InvestorPlace.