Bakkt Holdings has Big Goals, but Too Much Volatility

InvestorPlace - Stock Market News, Stock Advice & Trading Tips Bakkt Holdings is far from the worst crypto plays in existence today, but is still too much about potential over...

Bakkt Holdings (NYSE:BKKT) stock has garnered recent attention primarily because it is a catchall for the digital economy. The world is eager to understand how to capitalize on what many see as a revolution in digital assets. 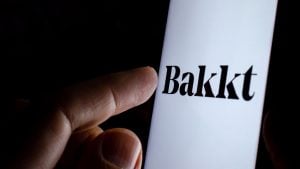 It would be fair then to characterize Bakkt Holdings as a generalist digital wallet of interest at least. But it’s abundantly clear that it is also very volatile.

Bakkt Holdings has existed since 2018. But it only recently became a publicly traded entity following an Oct. 18 reverse merger with VPC Impact Acquisition Holdings.

The platform has gained some traction in that relatively short lifetime. It announced that 1 billion points and miles have been linked to its app. Additionally, Bakkt is also building out a partnership network ultimately designed to increase the everyday utility of points and crypto rewards.

The basic premise is that points can be converted into cash and Bitcoin (CCC:BTC-USD) and vice versa for use in purchasing goods and services within its retailer network. A good idea, and truly the kind of utility that brings crypto further into the mainstream.

But the ride has been a wild one for investors in BKKT stock. The few days following the initial public offering (IPO) didn’t result in much action. Then, between Oct. 22 and Oct. 25 BKKT shares rocketed upward. Prices shot up from around $8 to $30, plateaued for a few days, then spiked above $40 on Oct. 29.

Then it began its descent.

The overarching truth is that Bitcoin exerts a massive force both negatively and positively. It sustained prices above $60,000 between mid-October to mid-November. That likely pulled BKKT shares higher when its IPO occurred. But Bitcoin has since fallen. BKKT stock has, as well.

So, for better or for worse any investment in Bakkt Holdings will remain tethered to the largest fish in the crypto pond. When they rise, so too will Bakkt Holdings. But when they are in bearish territory, as they are now, investors will place more scrutiny on Bakkt Holdings.

That will lead them to conclude how speculative it is. Much of its promise is mere hope. That hope could materialize into something more substantial, or it could fizzle.

I mentioned that the Bakkt Holdings platform houses 1 billion points and rewards linked to its app. That’s encouraging, but relatively vague in terms of quantifying its reach.

Perhaps a better way to do so is to understand its goals for user base growth. When Bakkt Holdings released its investor presentation in May, it had roughly 100,000 users. I recent article from Yahoo Finance also cites this as their current number of users.

The plan is to carve out its share of a pie currently valued at $1.6 trillion. That includes loyalty points/miles, in game assets, gift cards, and cryptocurrency. The company sees that market increasing to $5.1 trillion in value by 2025.

The plan is to grow from 100,000 users to over 32 million users by 2025. That’s pretty audacious to be sure. It’s really just a guess whether or not that occurs. What investors do know is that the firm’s third-quarter revenues hit $9.1 million, up 38% year-over-year. However, expenses increased by 60% in the same period. Net losses also increased by a similar 61% in that period.

To me, that is the best indication of BKKT stock. Projections from the company’s management are rosy. So, until the firm archives some of those quantifiable goals, stay away.

The post Bakkt Holdings has Big Goals, but Too Much Volatility appeared first on InvestorPlace.