Olin Corporation’s OLN shares have jumped 21.5% in the past six months outperforming the industry’s rise of 0.2%. The company has also topped the S&P 500’s 11.4% rise over the same period. 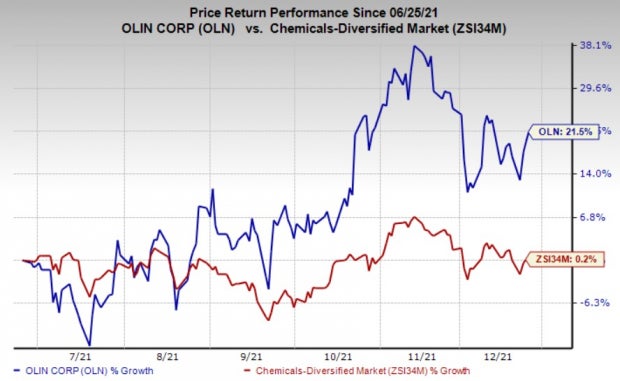 Olin is reaping the benefits from the Lake City U.S. Army contract, productivity actions and investment in the Information Technology (IT) project. Better-than-expected earnings performance and upbeat prospects have also contributed to the rally in the company’s shares.
The company’s Chlor Alkali Products & Vinyls and Epoxy business units are benefiting from higher prices, and its Winchester segment stands to gain from the Lake City U.S. Army ammunition contract. OLN looks to pump up the annual profitability of the unit through the multi-year contract. Sales from the Winchester segment surged 94% year over year in the third quarter of 2021, on the back of higher commercial and military sales, including ammunition produced at Lake City and higher commercial ammunition pricing.
Olin looks to drive improvement in its cost structure and enhance productivity through a number of projects. It currently has more than 1,200 active productivity projects that are expected to contribute to savings in 2021. It expects productivity measures to deliver $100 million of net savings in 2021.
The company is also aiming to improve its net debt to adjusted EBITDA ratio through a combination of improved adjusted EBITDA, disciplined capital spending and debt reduction by the end of 2021. For full-year 2021, it targets debt reduction of roughly $1.1 billion by using the cash generated from operations.
Olin is also focused on boosting shareholders' returns. Last month, it announced that its board approved a new $1 billion share repurchase program. It repurchased around 1.5 million shares of common stock for $68.3 million in the third quarter.
Its investment in the IT project promises cost and other benefits to the company. The project involves the implementation of necessary IT infrastructure and is expected to maximize cost-effectiveness, efficiency and control over its global chemical operations by standardizing business processes.
Olin's earnings estimates have also been going up over the past two months. The Zacks Consensus Estimate for 2021 has increased around 19% and the same for fourth-quarter 2021 has gone up 54%. The favorable estimate revisions instill investor confidence in the stock.

Clorox (CLX) to Report Q2 Earnings: What's in the Offing?