InvestorPlace - Stock Market News, Stock Advice & Trading Tips Rivian shares continue to hold up despite the lofty valuation. Can RIVN stock continue to charge higher or does it...

By Bret Kenwell December 27, 2021
This story originally appeared on InvestorPlace

Rivian (NASDAQ:RIVN) recently reported its first earnings report as a public company. The results disappointed Wall Street, and RIVN stock fell. It gained some of those losses back, but still trades at about half of its recent highs.

Many investors (including myself) questioning the stock’s valuation. To be fair, many of these  investors have been critical of the valuation for quite some time.

And to be fair to Rivian, it’s not the only electric vehicle (EV) automaker that’s commanded a massive valuation on the open market.

At its high — which came after a five-day 68% rally from the opening price — RIVN stock commanded a market cap north of $150 billion. While that’s great for Amazon (NASDAQ:AMZN) and its 20% stake, it’s simply laughable on its own.

The Problem With Valuation

There’s an issue with valuation and it goes like this: Valuation doesn’t matter, until it does. On the surface, that seems like the dumbest thing I’ve ever written. However, it’s also true.

The simple reality is that stocks can trade at an egregious valuation regardless of whether it makes any sense. As long as there are buyers willing to pay a higher price, it doesn’t matter if a stock trades at 10, 20 or 50 times revenue. It doesn’t matter if the company isn’t profitable or lacks free cash flow.

And anyone who says this observation isn’t true isn’t looking at reality. Lucid Motors (NASDAQ:LCID) doesn’t generate any meaningful revenue yet the stock commands a $66 billion market cap. That’s even after a 30% correction from the recent high!

Rivian commands an $88 billion market cap despite no meaningful revenue. Analysts expect $3.25 billion in sales next year, which is very good if the company can deliver (more on that in a minute).

But does that justify an $88 billion to $100 billion market cap? Not in my book and not in the book that Wall Street has followed on automakers for years.

That’s the other perplexing piece to the puzzle. Not only do these EV companies not justify their valuations based on even the rosiest of scenarios, but when we look at the valuations the stock market assigned to the auto industry over the years, this is the complete opposite scenario.

Tesla (NASDAQ:TSLA) changed everything when it came along, yet Ford (NYSE:F), General Motors (NYSE:GM) and others did not get the valuation boost that Tesla did. They have been more recently appreciated with their pivot towards EV, but in the end, they are still automakers.

I don’t know why the shift from traditional vehicles to EVs inherently makes a company vastly more valuable. In my reality, it doesn’t. But it will be interesting to see if the market reverses course on this valuation pump or if the space really has undergone a massive re-rating. 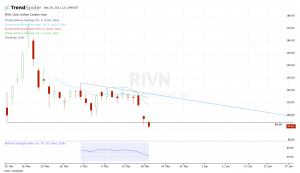 Valuation aside — and trading at more than 11 times 2023 revenue estimates — we have to wonder how accurate these estimates are.

The company recently delivered its third-quarter earnings expectations, disappointing Wall Street with a top- and bottom-line miss. While it has an impressive 71,000 pre-orders for its R1 electric truck, supply chain issues will likely keep meaningful deliveries from hitting the road until 2023.

Rivian doesn’t have a demand problem — which is good — but it’s got a supply chain problem and that may make current revenue estimates too optimistic.

On a brighter note, having Amazon as an investor (and a customer) is a huge bonus for the company and does help separate it from the other EV companies that have recently come public.

I just can’t help but think Rivian will be going up against Tesla’s Cybertruck, Ford’s F-150 Lightning and others. Both automakers have better supply chains, strong demand and more efficient operations than Rivian.

Do I believe the numbers back up this valuation? No, not at all.

It’s nothing personal against Rivian, but $100 billion valuations aren’t handed out like candy. I don’t know why a company that’s set to debut an EV into a wave of massive competition is being priced like a high-margin, high-growth software company with a powerful moat.

But those at the times we’re in, I guess.

On the date of publication, Bret Kenwell held a long position in TWLO. The opinions expressed in this article are those of the writer, subject to the InvestorPlace.com Publishing Guidelines.

Bank of Nova Scotia (BNS) is a Top Dividend Stock Right Now: Should You Buy?