Ford F delivered its first made-in-China Ford Mustang Mach-E in China on Dec 26, 2021.
The Mach-E model for China has its own localized production unlike those for the North American and European markets that are produced in Mexico. The Chinese production line was launched at Changan, Ford’s manufacturing plant in Chongqing, on Oct 18, 2021.
Ford has brought a product differentiation in China where its new electric cars are sold directly to customers instead of via traditional dealerships. There are currently 25 stores covered under this network of direct-to-customer stores located in major Chinese metropolitan markets, with Ford planning to increase the number.
The direct-to-customer stores, instead of being standalone sites, are located in high-traffic shopping centers that offer other global brands side by side. It is a China-specific model where customers, especially the younger generation, prefer direct access to vehicles after they have researched the latter in advance by themselves.
Notably, Ford sold over 3,000 Mach-E vehicles in the United States in November and unlocked more battery capacity for a higher range and improved the fast charging speed.
Ford stated that the time is right to focus on the first three models, namely Mach-E, Ford F-150 Lightning and Ford E-Transit, instead of adding more, which will lead to a higher production rate of the Mach-E in the near term. The company targets production of more than 200,000 vehicles per year in North America and Europe by 2023.
Ford’s shares have soared 134% over the past year compared with the industry’s 24% rise. The company’s estimated earnings growth rate for the current year is pegged at 359%. 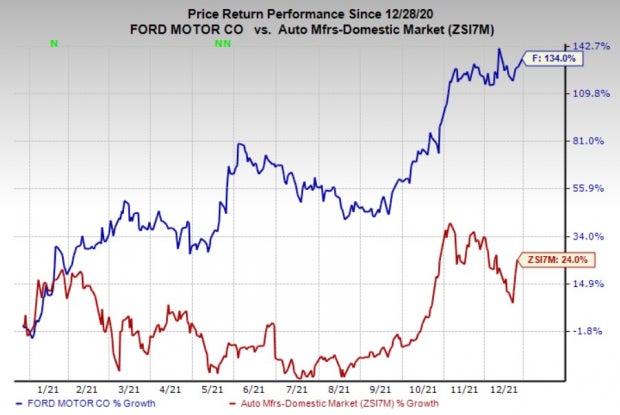 Ford, on its third-quarter earnings call, raised the EBIT guidance for 2021. The company now forecasts the current-year EBIT within $10.5-$11.5 billion, higher than the prior view of $9-$10 billion. Ford’s guidance for the full-year adjusted FCF remains intact within $4-$5 billion. Management projects commodity costs to flare up $3-$3.5 billion in the ongoing year, and another $1.5 billion in 2022.
The company also expects to outlay $40-$45 billion in strategic capital expenditures between 2020 and 2025, including one-half of the more than the $30 billion, which it plans to commit exclusively to BEVs.