Ford's (F) aggressive push into EVs surges its stock and takes up its market value above General Motors (GM).

Ford F has had an impressive run on the bourses in recent times, which has driven its market value above rival General Motors GM for the first time in more than five years. Ford had a market value of $83 billion at the close of trading session yesterday, marginally beating GM’s $82.9 billion. The last time F’s valuation exceeded GM’s was Sep 14, 2016, with the former closing the day with a market cap of $48.2 billion.
Ford's shares have more than doubled this year and have been trading at around a 20-year high. The company's shares have been on a raucous high since the appointment of Jim Farley as its CEO 14 months ago. The management change gave the company a major push into the domain of electric vehicles, which contributed to its catapulting shares. Ford’s Mustang Mach-E has already become a hit among customers and its all-electric F-150 pickup is set to hit the roads next year, is arguably the most anticipated EV of 2022.
Ford's aggressive electrification push, with planned spending of around $30 billion by 2025 and the target of 40% of its global vehicle volume to become all-electric by the end of the decade, augurs well. Ford’s proprietary software and hardware stack, named Blue Oval Intelligence, joint venture deals with SK innovation and LG Chem, the Electriphi buyout and the establishment of Ford Ion Park will further rev up its e-mobility capabilities and battery technology.
Meanwhile, General Motors aims to spend $35 billion through 2025 for EV and AV development. The automaker plans to roll out 30 fresh EV models by 2025-end. Key launches, including the GMC Hummer EV and Cadillac Lyriq crossover EV, are expected to buoy top-line growth.
Shares of F and GM have soared 134.3% and 36.5%, respectively, over the past year compared with the industry’s 22.4% rise. 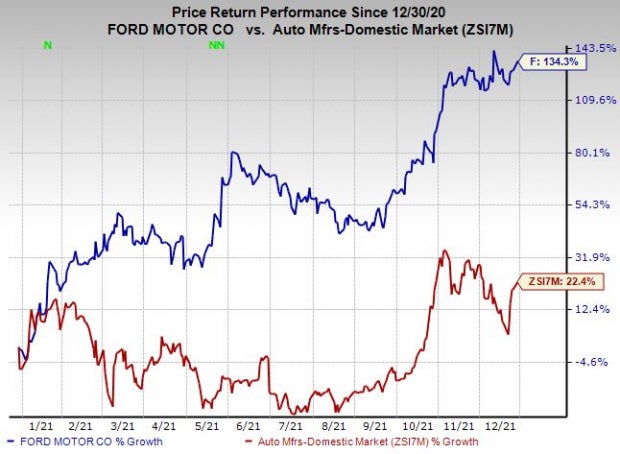 2 Auto Picks Worth Betting on