Valued at $30.7 million, the contract is expected to get completed by December 2026. The majority of the work related to this deal will be executed in Stratford, CT.

The CH-53K helicopter includes Sikorsky’s 50 years of manufacturing and operational triumph with its CH-53A, CH-53D/G and CH-53E predecessors. The chopper specializes in heavy-lifting and movement of troops and equipment from ship to shore and higher altitude terrains more rapidly and effectively for the expeditionary U.S. Marine Corps and international military missions. It also supports missions like humanitarian aid, troop transport, casualty evacuation, support of special operations forces, and combat search and rescue (CSAR).

Countries globally have been reinforcing their military resources due to intense geopolitical tensions and amplified terrorist threats. The United States, which is the largest exporter of military weaponries worldwide, is focused on strengthening its military resources. This is quite evident from the allotment of a $715 billion investment plan, in the U.S. fiscal 2022 defense budget, for military arsenals and weaponry.

Military helicopters have also been gaining importance owing to advancements and integration of new tactical, logistical features. This has provided ample opportunities for Lockheed Martin to win production as well as modification contracts for helicopters in recent times. This, in turn, is likely to drive revenues from the Rotary and Mission Systems (RMS) business segment, which comprises the Sikorsky helicopters.

The growing demand for proven combat system helicopters will continue to support Lockheed Martin. The latest deal is a testament to that.

Per a Research and Markets report, the global combat aircraft market is expected to witness a CAGR of 4% during the 2020-2025 time period. Such projections can be attributed to a rise in global threats and geopolitical instabilities, and increased spending on defense. Lockheed along with other combat jet manufacturers like Northrop Grumman NOC, Boeing BA and Textron TXT thus appear poised to benefit.

Since its inception, Northrop Grumman has been a pioneer in the development of manned aircraft for combat. Northrop Grumman also has a tradition of providing technological leadership in all aspects of military aviation and aircraft, such as manned, unmanned, targeting, surveillance, and aircraft self-protection systems that enable warfighters to accomplish missions anytime, anywhere and under any conditions.
Northrop Grumman reported third-quarter 2021 earnings of $6.63 per share, which surpassed the Zacks Consensus Estimate by 11.8%. NOC stock has gained 8.2% in the past month.

Boeing boasts a long-term earnings growth rate of 4%. BA stock has risen 1.5% in the past month.

Textron reported third-quarter 2021 adjusted earnings of 85 cents per share, which exceeded the Zacks Consensus Estimate of 75 cents by 13.3%. TXT stock has gained 6.9% in the past month.

In the past month, shares of Lockheed have gained 4.5% compared with the industry’s rise of 1.6%. 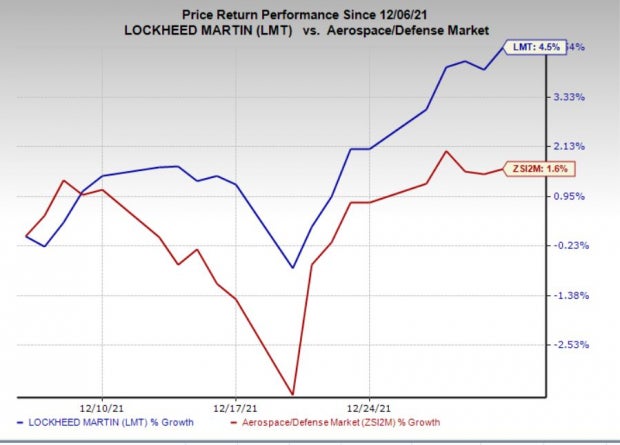 5 Tips for Successfully Working Remotely in the Long Term