HollyFrontier Corporation’s HFC management sounded a cautionary note, stating that it sees fourth-quarter crude oil throughput at a level lower than previously thought, according to a recent filing with the U.S. Securities and Exchange Commission. The U.S. fuel refiner has pegged average throughput for the three months ended Dec 31 at approximately 420,000 barrels per day — down nearly 9% from the midpoint of the guidance provided earlier.
In HollyFrontier’s West Region, output was impacted by the newly acquired Puget Sound refinery’s post-purchase downtime, lower crude availability due to floods/landslides along the Trans Mountain Pipeline route, issues with starting the Navajo facility after the planned turnaround, to go with severe weather-related disruptions. Meanwhile, throughput in HFC’s Mid-Continent region was hit by lower runs at the Tulsa Refinery and extreme weather.
Even as the warning on lower-than-expected fourth-quarter throughput makes its way through to investors, HollyFrontier’s earnings revisions have trended in the wrong direction over the last 30 days with analysts having taken down their numbers. As a matter of fact, the Zacks Consensus Estimate for HFC’s December quarter earnings has dipped from 72 cents to 69 cents over the past 60 days, while the 2021 number is off from a profit of $2.43 to $2.40.
Nevertheless, earnings are expected to grow about 193.2% in the fourth quarter and 375.9% in 2021, respectively, compared to the prior year. Plus, HollyFrontier has topped the Zacks Consensus Estimate by an average of 20.9% in the trailing four quarters, including a 66.2% beat in Q3. HFC carries a Zacks Rank #3 (Neutral) and has gained around 31.5% in a year. 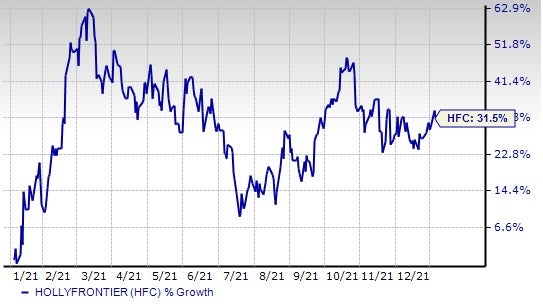