Valuation Matters in the Short Term for Cloudflare Stock

InvestorPlace - Stock Market News, Stock Advice & Trading Tips Cloudflare (NYSE:NET) proves there’s a price that’s too high, even for a good company in a hot niche. I will...

By Dana Blankenhorn January 5, 2022
This story originally appeared on InvestorPlace

Cloudflare (NYSE:NET) proves there’s a price that’s too high, even for a good company in a hot niche. I will admit that I was caught off guard. After watching NET stock continue to rise despite selling at 50 times revenue, I took a small position in December and am down double digits. 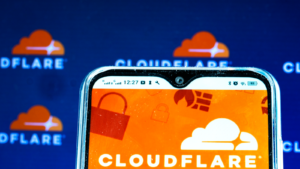 I’m not panicking, though. Instead, I’m doubling down. Investment is about riding the downdrafts as well as the updrafts, having confidence the companies you buy will come good over time. But JPMorgan Chase (NYSE:JPM) analysts are right in saying that NET stock got a little ahead of itself.

Cloudflare was founded in 2009 by Matthew Prince and Michelle Zatlyn around “Project Honeypot,” a set of unsecure sites meant to attract bad actors. It has evolved into a system protecting against distributed denial-of-service (DDOS) attacks and ransomware.

Cloudflare has also become a content delivery player against companies like Fastly (NYSE:FSLY). Prince has been advocating for what is called Web3, which I call the “Cloudless Cloud,” aggregating capacity in many sites to create the equivalent of a custom cloud architecture.

Web3  has since become the hottest tech topic since blockchain, one technology it’s built on. Instead of keeping all your eggs in one basket, Prince suggests you know where your eggs are so the egg thieves can’t find them.

Since going public in September 2019, Cloudflare shares are up nearly 490%. But they’re down more than 50% just since Nov. 18, not just on financial concerns but technical ones as well. This is the downdraft I bought into.

It’s the technical concerns that should worry investors. Problems with the open-source Log4j code are tough to patch since the code is buried deep within millions of websites.

Yet, it’s the financial concerns analysts are focused on. Analysts now worry about the cost of buying even good ideas, like Zaraz, which offloads sites’ script problems into the network.

For the first three quarters of 2021, Cloudflare brought in $463 million of revenue. It lost $183 million investing ahead of its growth. How, they ask, does that justify a market cap of more than $37 billion?

It doesn’t. Investors are betting that Cloudflare can maintain its 50% annual growth rate indefinitely. We’re buying its vision of a more secure, distributed cloud where customers buy not just what they need, but only when and where they need it.

That’s not where we are now, but it may be where we’re at in 2025. Thus, any tilt toward value and away from cloud is going to hit Cloudflare harder than players like Amazon (NASDAQ:AMZN). Much of what it’s doing remains speculative.

So far, only 1 of the 15 analysts following Cloudflare at Tipranks has gotten off the train and issued a “sell” on NET stock. But seven analysts are sitting on the sidelines in the “hold” camp. That’s been enough to sink the shares. As Forbes Beth Kindig writes, the company must prove its valuation.

The Bottom Line on NET Stock

You should not put all your money into stocks like Cloudflare. However, a balanced portfolio should have some cash working at the edge of change.

Change, built on the cloud, is constantly accelerating. The cloud is accelerating the pace of science, engineering, biology and commerce. With inflation now a fact, cloud-based applications offer hope for minimizing the damage or even reversing it.

Concepts like Web3 and Cloudless Cloud sound esoteric, but they’re how software can make the most of cloud networks. The value of that will rise and fall in the short term. Over the longer term, it will rise and rise, and so should NET stock.

On the date of publication, Dana Blankenhorn held long positions in NET and AMZN. The opinions expressed in this article are those of the writer, subject to the InvestorPlace.com Publishing Guidelines.

Dana Blankenhorn has been a financial journalist since 1978. His latest book is Technology’s Big Bang: Yesterday, Today and Tomorrow with Moore’s Law, essays on technology available at the Amazon Kindle store. Follow him on Twitter at @danablankenhorn.

The post Valuation Matters in the Short Term for Cloudflare Stock appeared first on InvestorPlace.

Is Blue Apron Holdings a Buy Under $10?

Does Signet Jewelers Deserve a Place in Your Portfolio?

Spotify Removes All of Neil Young's Music Amid Joe Rogan Controversy: 'So Much for Art'