The discoveries were made in exploration wells 35/10-7 S and 35/10-7 A in the Toppand prospect. Toppand is the fifth discovery in the Fram and Troll area, with total proven resources of more than 300 million barrels of oil equivalent.

The exploration wells were drilled in production license (PL) 630, which was awarded to Equinor in the 2011 Award in Predefined Areas. Equinor is the operator of the license with a 50% interest.

The wells were drilled by the West Hercules semi-submersible drilling rig, 354 meters below the water surface. The wells have now been permanently plugged and abandoned. West Hercules recently started drilling the exploration well 6407/9-13 in PL-1060, which is operated by Equinor in the Norwegian Sea.

The 35/10-7 S and 35/10-7 A are the second and third exploration wells in PL-630. The discoveries revitalize one of the most developed areas on the Norwegian Continental Shelf. Equinor considers the latest discovery commercially viable and plans to tie it to the nearby Troll B or Troll C platform.

Headquartered in Stavanger, Norway, Equinor is one of the leading integrated energy companies in the world.

Shares of EQNR have outperformed the industry in the past six months. The stock has gained 37.5% compared with the industry’s 18.5% growth. 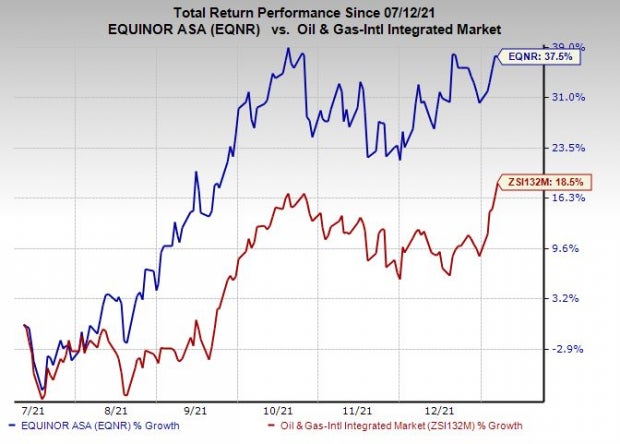 Investors interested in the energy sector might look at the following companies that presently carry a Zacks Rank #2 (Buy). You can see the complete list of today’s Zacks #1 Rank (Strong Buy) stocks here.

Halliburton Company HAL is one of the largest oilfield service providers in the world, offering a variety of equipment, maintenance, and engineering and construction services to the energy, industrial and government sectors. The company operates in more than 80 countries.

The overall depth of Halliburton’s global oilfield service franchise is evident from the fact that the company generated a free cash flow of more than $1.1 billion in a year as volatile as 2020. HAL followed it up with approximately $900 million of free cash flow in the first three quarters of 2021. Halliburton’s ample cash flows provide it with the flexibility to pursue a growth-oriented initiative.

Williams Companies' debt maturity profile is in good shape, with its $4.5-billion revolver maturing in 2023. Williams is also paying its shareholders an attractive dividend, yielding nearly 6%. Besides, the company's board recently approved a share repurchase program worth $1.5 billion, highlighting the commitment to shareholders.

Patterson-UTI Energy, Inc. PTEN is one of the largest North American land drilling contractors, having a large, high-quality fleet of drilling rigs. The company’s technologically advanced ‘Apex’ rigs are the key to its success. Patterson-UTI’s proprietary design makes the rigs move faster than conventional rigs, drill quicker and more efficiently than conventional rigs, and allows for a safer operating environment.

Patterson-UTI’s long-term debt is around $902 million. Importantly, the company's debt-to-capitalization at the end of the third quarter was 34.3%, quite conservative versus 39.4% for the sub-industry to which it belongs. Apart from low leverage for its industry, Patterson-UTI has ample liquidity with cash and cash equivalents of $956 million and $600 million available under the revolving credit facility. Also, the company has a comfortable debt maturity profile with no major debt outstanding until 2028.

How a Global Pandemic Prepared Business Leaders for Hybrid Work