By Muslim Farooque January 11, 2022
This story originally appeared on InvestorPlace

The omicron Covid-19 variant has taken its toll on cruise stocks. The three cruise ship giants in Royal Caribbean (NYSE:RCL), Carnival (NYSE:CCL), and Norwegian Cruise Line (NYSE:NCLH) have all seen their shares tumble in recent days. Adding to their woes, the Centers for Disease Control came out with a warning to “avoid cruise travel, regardless of vaccination status.”

According to recent reports, 90 cruise ships have reported coronavirus cases. Moreover, roughly 5,000 cases have emerged from cruise ships sailing from Dec. 15-29 last year. In contrast, only 162 cases were reported during the first weeks of December.

The big three cruise operators lost a lot of money in 2020 and continued struggle last year. Moreover, their outlook looks murky at this stage for 2022, which is why it’s best to avoid them. Having said that, let’s look at these cruise stocks in a little more detail to understand the bear case.

Most investors will have thought that with Carnival’s amazing second-half booking performance, the worst of the pandemic was over. However, cancellations have increased significantly, with omicron on the rise, and bookings have dropped for the operator. Load factors are below historical levels for the first half of 2022, which will continue to pressure the company’s financial flexibility.

Perhaps the biggest problem for Carnival is its massive debt load. It tripled its debt during the pandemic, significantly more than its peers. Moreover, with the lack of revenue, it burns $2 billion per quarter. Its debt is roughly 2.2 times its equity, which is more than 410% higher than its 10-year median.

It’s clear that Carnival will have a heck of a time deleveraging its balance sheet and reinstating dividends in the next few years. Despite this, CCL stock trades at a whopping 12.8 times sales.

Similar to its peers, Royal Caribbean Cruises’ debt load has virtually crippled its flexibility. With a colossal debt balance of over $20 billion and accompanying interest expenses, RCL’s cash flow generation will be severely impeded for the foreseeable future. Additionally, it will have to issue more equity and debt to maintain its operations.

Currently, RCL is burning through more than $1 billion in cash flow annually. Moreover, as per its recent quarter, revenues were down 85.7% from the prior-year period. Future free cash flows are likely to be gobbled up by debt and interest payments.

With omicron wreaking havoc, a top-line recovery seems unlikely at this point, but RCL stock still trades at an unfathomable valuation. The stock is exceptionally overvalued with a price-to-sales multiple of more than 34x. 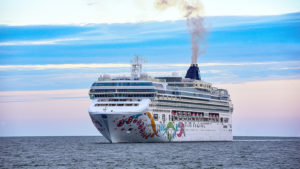 Norwegian Cruise Lines plans to return to full capacity by April this year. However, with recent developments, that seems unlikely at this juncture. It ended its third quarter with a debt load of $10.5 billion, a massive increase from the $6 billion on its books before the coronavirus crisis.

Furthermore, during the third quarter, the company burned through $825 million in losses. This includes $161 million in interest expenses. Additionally, its average cash burn during the third quarter came in at $275 million. That number is expected to rise to $350 million, driven primarily by relaunches of additional vessels. Moreover, the cruise operator has multiple projects in the pipeline, which will require a boatload of debt for it to take up.

The post 3 Cruise Stocks That Could Be Torpedoed by the CDC’s Latest Warning appeared first on InvestorPlace.