InvestorPlace - Stock Market News, Stock Advice & Trading Tips Buffett’s success might not ever be duplicated, but that doesn’t mean lessons from his experience aren’t of importance. Owning shares...

By Bob Ciura January 12, 2022
This story originally appeared on InvestorPlace

Warren Buffett is one of the most successful investors of all time. Few, if any, will ever have the means to replicate the nearly $300 billion investment portfolio of Berkshire Hathaway (NYSE:BRK.B).

The average investor, however, can be successful in their own right by following the advice and actions of Buffett. Looking across the list of Warren Buffett stocks, we can see that the “Oracle of Omaha” focuses on owning shares of high-quality companies that have significant competitive advantages and prospects for future growth.

We would take this one step further and argue that the average investor should focus on owning high-quality dividend paying stocks as a way to reach their financial goals.

This article will examine three of our favorite Buffett names, including:

First up is Apple, which almost needs no introduction. The nearly $3 trillion company is the largest in the world. Apple generated $366 billion of revenue in its most recent fiscal year, which is greater than the market capitalization of most companies.

Apple’s chief competitive advantage is that it has created a massive ecosystem that is not easily reproduced. This enables the company to cross-sell products throughout its user base, a driving force in Apple’s revenue compounding by more than 14% annually over the last decade.

Another factor working in Apple’s favor is the company’s Service business, which include iTunes, Apple Pay, the App Store, iCloud, and Apple Music, among others. This business has grown at a strong rate over the years, generating more than $68 billion in revenue for the most recent fiscal year. Services has a higher margin rate than most other areas of the company, making it one of the most profitable segments for Apple.

The company’s business model has provided Apple with an abundance of cash flow. The most recent quarter saw Apple have near $63 billion in cash and equivalents on its balance sheet. The company has made use of its cash largely through share repurchases as the share count has been decreased by almost 5% annually for the past 10 years.

Apple has also returned capital to shareholders through dividends. Shares yield just 0.5% at the moment, but the dividend has a compound annual growth rate in the high double-digits since being initiated.

The dividend also looks very safe. The current annualized dividend of $0.88 equates to a projected payout ratio of just 15%, which is lower than Apple’s 10-year average ratio of 20%. The company has raised its dividend for nine consecutive years. With a low payout ratio and a large cash position, it is very likely that Apple’s dividend growth streak will continue.

With a business that possesses a size and scale unmatched by peers, it is no wonder that Apple is the largest holding within Berkshire’s investment portfolio.

Next is Bank of America, one of the largest financial institutions in the world. The company is valued in excess of $400 billion and produces revenue of $86 billion annually.

Bank of America offers traditional banking services, such as deposits, checking accounts, credit cards, and consumer and commercial lending. The company provides wealth management services as well. Total deposits grew more than 15% to just under $2 trillion in the most recent quarter, giving Bank of America one of the largest deposit bases in the world.

Bank of America has multiple advantages working in its favor. The Federal Reserve has reaffirmed that it will act in an attempt to tame inflation. Rate hikes are very likely this year, with most observers believing that at least three, and maybe four, will take place this year. The possibility of three to four rate hikes for 2023 is also high. This will allow Bank of America, along with the rest of the banking industry, to see much improved net interest income growth compared to what was generated with rates close to zero for quite some time.

At the same time, Bank of America has largely recovered from the difficult 2020 period where provisions for credit losses soared as consumers and business were greatly impacted by the shutdowns related to the Covid-19 pandemic. PCLs totaled more than $11 billion at the end of 2020. The most recent quarter saw PCLs improve $2 billion to a benefit of more than $600 million. This was the second straight quarter where PCLs have reversed and loss rates are near a five-decade low for the company, showing that Bank of America is seeing a solid recovery from the worst of the pandemic.

As a result, Bank of America appears to be a much stronger company than its was during the last financial crisis. Bank of America, along with much of the rest of the banking industry, was forced to slash its dividend as the company dealt with the bursting of the housing bubble. The dividend was cut from $2.24 in 2008 to just $0.04 in 2009, a stunning 98% reduction.

The current annualized dividend of $0.78 represents just a third of the dividend shareholders received in 2008, so Bank of America has a considerably distance to go before making a new high. That said, shareholders have received a higher annual dividend total for eight consecutive years, with the company raising its dividend by 17% last year following eight quarters at the same distribution amount. The dividend has a CAGR of 39% over the last decade and has doubled in the last five years.

Shares yield 1.7%, slightly better than the average yield of the S&P 500. The yield is on the low side and the dividend amount is still a shell of what it once was, but Bank of America’s distributions look to be on much sturdier ground today. The projected payout ratio for 2021 is just 25%, almost identical to the 24% average payout ratio seen over the last five years.

Bank of America’s positioning as a leading bank in the U.S. is very much solidified. The company has an extensive deposit base and has seen marked improvements in its PCLs since the end of 2020. The dividend is far from where it used to be, but shareholders should take comfort in the company’s very low payout ratio. Bank of America appears to have weathered the 2020 period well and looks much stronger today than it was during the Great Recession.

Buffett appears to be very confident in Bank of America as it is the second largest position in the investment portfolio. 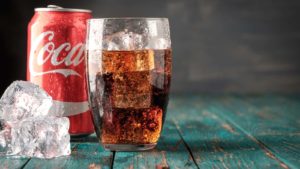 Coca-Cola is the largest producer of non-alcoholic beverages in the world. The company has a market capitalization of $261 billion and produces annual revenues of $33 billion.

Coca-Cola has a reach in the area of non-alcoholic beverages that competitors cannot match. The company owns or licenses more than 500 beverages lines and sells its products in more than 200 countries. The company’s products are consumed nearly 2 billion times per day worldwide.

Even with the massive portfolio, Coca-Cola really generates the bulk of its revenue from 20 brands, including Coca-Cola, Diet Coke, Sprite, and Powerade, that all have yearly revenue of more than $1 billion.

Changing consumer tastes for healthier food and drink options has been a headwind for most companies in the food and beverage industry. Soda sales in the U.S. have been in decline for a long time as consumers are more aware of what they eat and drink. Coca-Cola has attempted to address this challenge by bringing to market products that contain less or zero-sugar, such as Coke and Fanta Zero Sugar lines.

The company has also invested in teas, water and juice brands. While known for its carbonated beverages, Coca-Cola does have several key brands outside of this area that bring in more than $1 billion of annual revenue. This includes Minute Maid, Dasani, Gold Peak tea, and Georgia Coffee.

Coca-Cola’s long-term success has allowed the company to raise its dividend just shy of six decades, one of the longest dividend growth streaks in the market. This also places among the Dividend Kings, a group of just 35 stocks with more than 50 years of dividend growth. The dividend has increased by just a penny per quarter over the last four years. While the dividend has compound by 5.7% annually over the last decade, this growth rate declines to just over 3% over the past five years.

Shares of Coca-Cola yield 2.8%, more than double that of the S&P 500 index, but is below the stock’s long-term average yield of 3.1%. The projected payout ratio for 2021 is 73%, in-line with the 10-year average payout ratio of 72%. The high payout ratio looks sustainable, but it is probably why dividend growth has been muted recently.

Almost 60 years of dividend growth is a feat rarely accomplished, proof that Coca-Cola’s business model works over all portions of the economic cycle.

Buffett’s success might not ever be duplicated, but that doesn’t mean lessons from his experience aren’t of importance. Owning shares of companies with firmly entrenched business models can be an excellent way to build wealth.

Apple, Bank of America, and Coca-Cola are three of the four largest holdings within Buffett’s investment portfolio.

Each company brings its own unique advantages that set it apart from the competition. Each name could be a good long-term investment for those looking to add high-quality businesses to their own investment portfolio.

On the date of publication, Bob Ciura held a long position in AAPL. The opinions expressed in this article are those of the writer, subject to the InvestorPlace.com Publishing Guidelines.

Bob Ciura has worked at Sure Dividend since 2016. He oversees all content for Sure Dividend and its partner sites. Prior to joining Sure Dividend, Bob was an independent equity analyst. His articles have been published on major financial websites such as The Motley Fool, Seeking Alpha, Business Insider and more. Bob received a bachelor’s degree in Finance from DePaul University and an MBA with a concentration in investments from the University of Notre Dame.