InvestorPlace - Stock Market News, Stock Advice & Trading Tips Carvana may double its revenue this year, but it's paying more for cars and there are other troubling signs. The...

By Dana Blankenhorn February 18, 2022
This story originally appeared on InvestorPlace

Carvana (NASDAQ:CVNA) stock has had a weird or at least unexpected ride these last weeks, tumbling nearly 45% year-to-date. 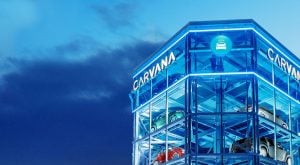 While used car prices remain high, with dealers like AutoNation (NYSE:AN) seeing fairly stable stock prices, Carvana stock is down by more than 50% in the last year. It trades today at around $135 with a market cap of nearly $24.6 billion on estimated 2021 revenue of $10.6 billion.

The Bull Case for CVNA Stock

Growth has many analysts on Carvana's side. One has labeled CVNA stock an "apex predator." Tipranks lists 14 analysts following Carvana stock and 10 say buy it. Their forecast is that the price could double in the next year.

CVNA stock was a pandemic-era star, a "disrupter" that made car-buying simple and delivered the products to customer homes. Its Super Bowl ad this year featured a woman touting the company to everyone she met.

Carvana's size made it the obvious choice to unload Hertz Global (NASDAQ:HTZ) inventory when that company committed to renting Tesla (NASDAQ:TSLA) electrics. Its size meant Carvana could pitch its own third-party network to dealers, combining inventory to offer buyers better choices.

The most powerful endorsement of its online strategy probably came this month, when General Motors (NYSE:GM) announced its own Carvana clone, called CarBravo.

The Bear Case for Carvana

Despite its online cache and its rapid growth, Carvana is still a used car dealer. Its costs are rising alongside the prices buyers are paying. Some customers say they've sometimes gotten more from Carvana than they paid when the vehicles were new.

Carvana cars are often sold sight unseen. This can lead to trouble. One buyer in Denver said he got a stolen, damaged vehicle. Carvana has also been charged with selling cars without clear title. Its business licenses have been threatened or suspended in several states over the issue.

Carvana also has conflicts of interest. The company was originally spun out of privately-held DriveTime Automotive, which is a 132-dealership chain started by CEO Ernie Garcia III's father.

Despite the red flags, CVNA stock was selling for as much as $361 in September. Its fall has been accelerating since late December. The stock fell by 30% in January alone. Bulls blamed declining growth with the pandemic's end and a turn away from growth stocks.

Not all used car companies are seeing plunging stock prices. AutoNation is down just 4% on the year. Its two-year stock performance has now doubled that of Carvana. Other rivals like Group 1 Automotive (NYSE:GPI) and Carmax (NASDAQ:KMX) have also outperformed CVNA stock since the start of the year.

Based solely on fundamentals, Carvana is a buy, but I don't think I'd be buying here. The conflicts of interest are troubling. The problems with state licensing authorities raise red flags. Carvana may have stretched its neck out too far to buy growth. It may not be done paying the price.

On the date of publication, Dana Blankenhorn held no positions in companies mentioned in this story. The opinions expressed in this article are those of the writer, subject to the InvestorPlace.com Publishing Guidelines.

Dana Blankenhorn has been a financial and technology journalist since 1978. He is the author of Technology's Big Bang: Yesterday, Today and Tomorrow with Moore's Law, available at the Amazon Kindle store. Write him at danablankenhorn@gmail.com, tweet him at @danablankenhorn, or subscribe to his Substack.