Technical Aspects: Welups Vs Bitcoin Vs Ethereum – What's the Difference?

Over the last decade, the growth of digital technology has resulted in major changes in several industries. Blockchain technology, which underpins cryptocurrencies like Bitcoin, has the prospect of fundamentally altering how people interact with financial institutions. Digital currency transactions may be recorded and documented using blockchains, decentralized platforms. 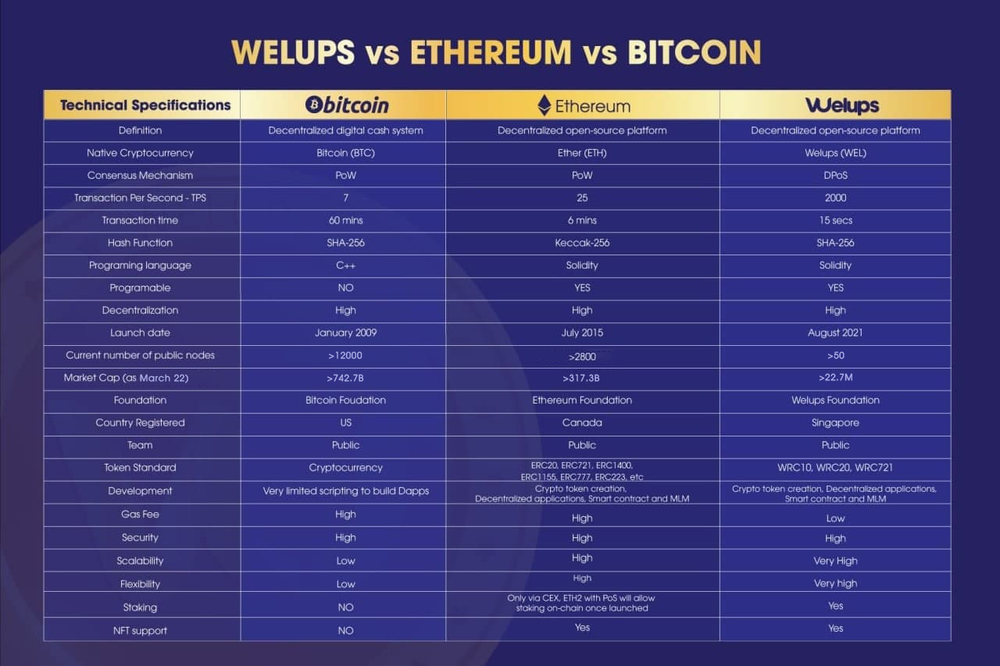 Let us look closely at the differences between the three leading coins in the crypto market.

The Welups Blockchain has a native currency called $WELUPS. Despite the present global challenges, the $WELUPS coin offers new possibilities and promises for new or large investors. Using a wide range of decentralized apps, $WELUPS can link the whole chain's ecosystem together.

As a decentralized digital currency, Bitcoin (BTC) records all transactions on a distributed ledger known as the blockchain, constantly updated. To validate blocks of transactions, Bitcoin miners use elaborate computer rigs to solve challenging riddles.

Ethereum is a smart contract-enabled decentralized and open-source Blockchain. The platform's native currency is ETH. The market capitalization of Ether is second only to that of Bitcoin. Ethereum was created in 2013 by Vitalik Buterin, a computer programmer. Let's take a closer look at these three coins and their distinctions.

The WELUPS currency uses a DPoS consensus process, whereas Bitcoin and Ethereum employ PoW. Transactions are confirmed, and new blocks are added to the blockchain using the Proof of Work (POW) mechanism, which employs a competitive validation process. Proof of Stake (POS) picks miners at random to verify transactions.

With Delegated Proof of Stake (DPoS), the method is more democratic than with Proof of Stake (POS). As a result, it is more inclusive to the community. WELUPS provides 2000 transactions per second, compared to the 7 and 25 transactions per second offered by Bitcoin and Ethereum, respectively. Bitcoin takes an hour, Ethereum takes a minute, and WELUPS takes 15 seconds when it comes to transactions. WELUPS emerges as the obvious winner due to the glaring disparity between the two.

An arbitrary-size-to-fixed-size mapping function is known as a hash function. Bitcoin and WELUPS employ SHA-256, whereas Keccak-256 is used for Ethereum. Furthermore, Bitcoin utilizes C++, while Ethereum and WELUPS employ Solidity, a computer language. It's easy to learn Solidity since its syntax is built on JavaScript and incorporates ideas from both C++ and Python.

Ethereum and WELUPS, on the other hand, allow for ongoing upgrades and innovation, but Bitcoin does not. These cryptocurrencies serve the primary purpose of cryptocurrencies by being extremely decentralized. WELUPS was introduced in August 2021, after the debut of Bitcoin and Ethereum in 2009 and 2015, respectively. As of December 2021, Bitcoin has moreover than 12000 public nodes, followed by Ethereum, which has more than 2800 nodes in total.

The number of nodes in the WELUPS network has grown to more than 50. At $923 billion in market cap, Bitcoin is the most valuable cryptocurrency, followed by Ethereum at $489 billion. The current market capitalization of Welups is over 22.7 million. Bitcoin Foundation is backing Bitcoin, Ethereum foundation is behind Ethereum, and WELUPS has Welups Foundation backing the coin. Bitcoin is registered in the US, Ethereum in Canada and WELUPS in Singapore. The team backing all three coins belongs to the public sector.

As we all know, a token standard is an interface and a set of rules that a smart contract must adhere to comply with the common standards. Token standards used by Bitcoin use cryptocurrency standards, and Ethereum uses ERC-20 and ERC-721, ERC-1400 and ERC-1155. WELUPS employs WRC10, WRC-20, and WRC-721, on the other hand. 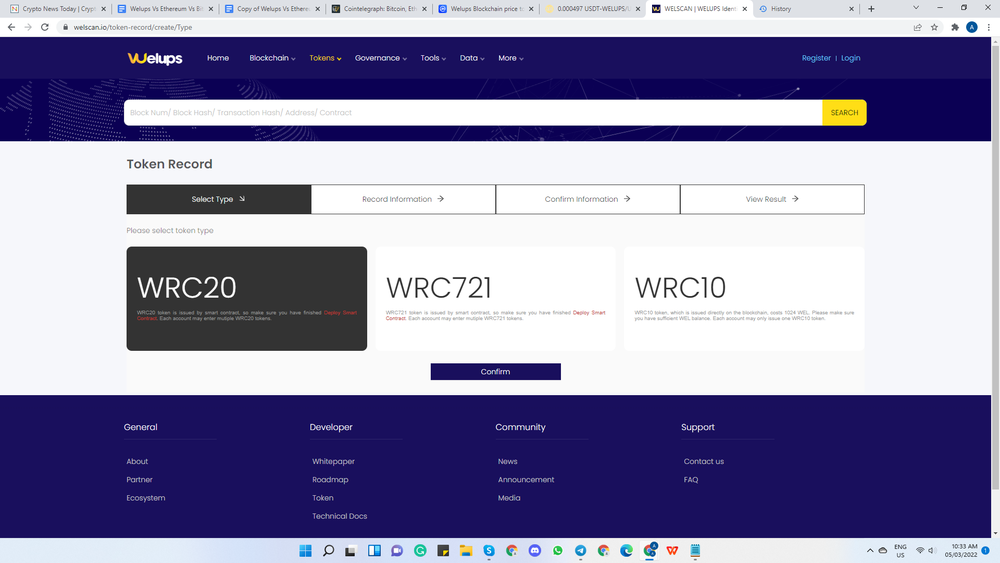 The integration of different applications is made possible by frequent upgrades and innovations that assist overcome problems. Dapps can only use a small subset of Bitcoin's scripting capabilities. In addition to MLM, both WELUPS and Ethereum provide Crypto tokens, Decentralized apps and smart contracts.

Both Bitcoin and Ethereum's gas costs have been a serious issue for a long time now. There are no gas costs for WELUPS transactions since they cost close to nothing. Aside from bitcoin, the other two provide high scalability and adaptability. All three provide high levels of security.

Bitcoin has no choices for users who wish to make passive revenue by staking, while Ethereum has just CEX, and ETH2 will only enable PoS once deployed. WELUPS, on the other hand, provides a wide range of stake sizes and a high annual percentage yield. Non-fungible tokens (NFT) are the current trend in blockchain technology and have attracted interest from various industries, including sports and design. Except for Bitcoin, both Ethereum and WELUPS offer NFT support.