By Nicolas Chahine March 9, 2022
This story originally appeared on InvestorPlace

Investor confidence is questionable at best this month. Equities are having difficulty in finding footing during the selloff. The indices are showing sporadic strength even on down days, but they haven't sustained it. Case in point, the action on Tuesday swung from being up 2% to down 2% at the close. Today we check on the opportunity in First Solar (NASDAQ:FSLR) stock, which shows relative strength.

Specifically, FSLR stock spiked 6% while the indices struggled. Ultimately, I think the bullish thesis is alive, but investors should proceed with a bit of caution. The easy part of the rally is now close to natural resistance. Therefore, starting new positions here could be tricky.

The upside in First Solar actually started from its recent earnings report. It was impressive to see it gain almost 30% from near $60 per share. It did so twice, once before the event and then after it. This makes $60 a reliable support line. This will be important if the indices decide to capitulate this month. I bring this up because it is my primary concern, even for a strong FSLR.

Wall Street has its full attention on headlines not chart lines. Investors are not caring much about internal stock strengths or results. Therefore, I must lookout for extrinsic problem sources as well.

First, we must account for surprise headlines on the Ukraine crisis front. Then, on Thursday, traders will fret the CPI report. Some experts even expect a double digit print. The commodity mega spike is likely skewing the data to a shocking level, so that risk is real. If that happens, it could spook the Federal Reserve next week into an extreme hike measure. FSLR stock would not continue its breakout if the S&P 500 is correcting. On that front, if the indices lose the Feb. 24 low, they could fall another 11% from there. 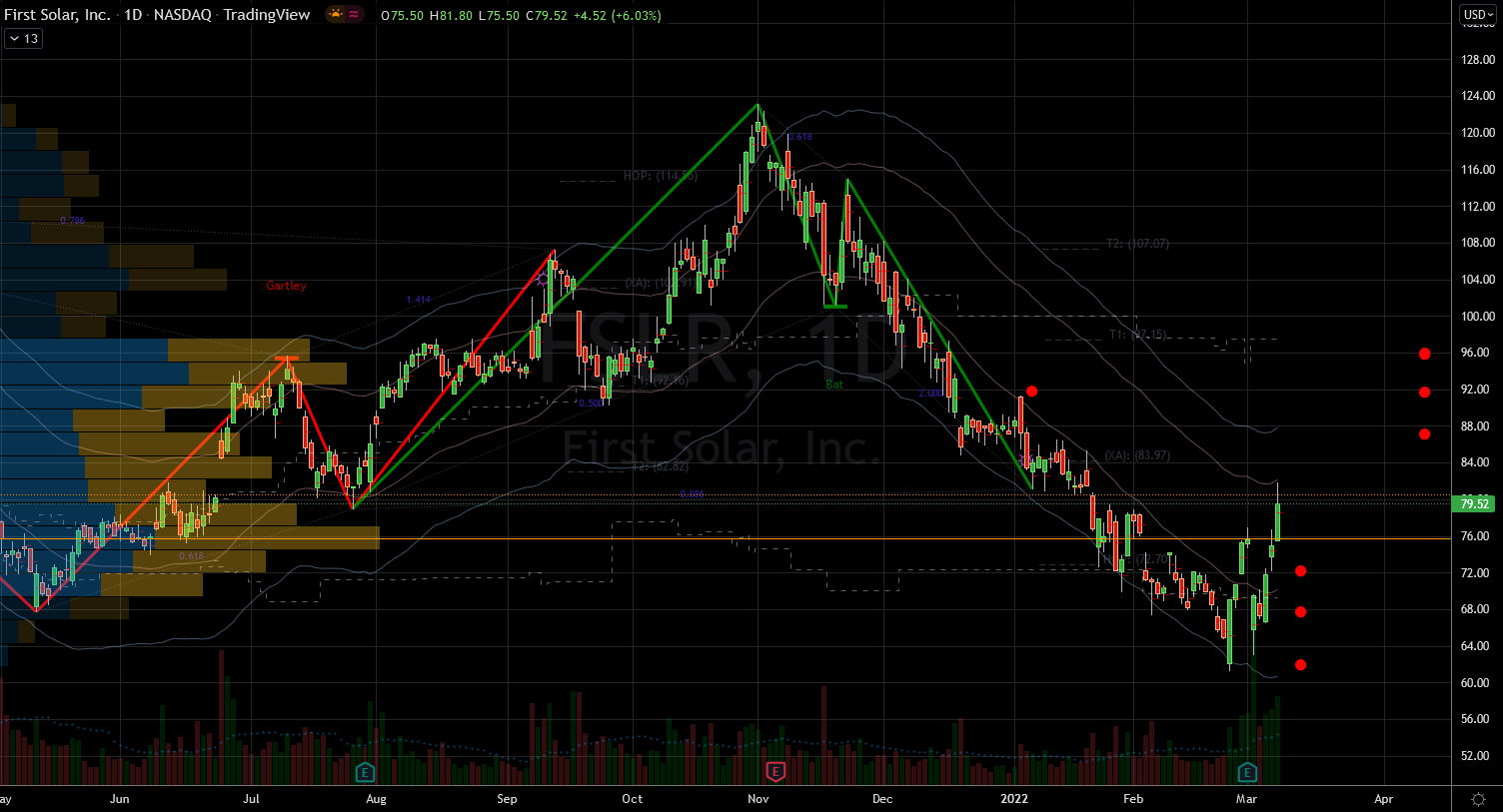 Looking inward, First Solar's financial metrics are boring. The revenue line for example remains under $3 billion since 2015. In fact, if you compare that year to now it shows shrinkage. Sunrun (NASDAQ:RUN) revenues, on the other hand, are now more than five times larger.

The nuance advantage that FSLR has over RUN is its positive cash flow from operations. RUN is in a giant negative situation; whereas, FSLR is up $237 million. This makes executing on plans much easier especially in rising rate environments.

Judging by the rallies this month, I'd say that both have strong fans on Wall Street. If the indices find footing, they should both continue to do well. But from a new investor's perspective, I'd rather wait out for a small dip at least toward $72 per share. This, of course, also depends on the investor time frame. Those who intend to own it for a long while don't have to be so picky. Regardless of whether you're short or long, you should refrain from going all in. It's imperative to leave room to add later during these binary headline periods.

Politicians are on edge, so they are unpredictable. Therefore, they could escalate the fighting beyond the Ukraine borders without warning. For everyone's sake, I hope that it doesn't happen, in fact I am counting on it. My thesis is that they will resolve the issues before other nations join the physical fight.

The government sanctions and the corporate lockouts could do the trick. I guess this is a modern day siege around a castle. I think at some point all parties will realize the thin line between their risks and rewards.

First Solar stock rallied 328% out of the pandemic bottom. Then it corrected 50% from the November peak. This latest 30% rally is bringing it closer to the 50% retracement level.

Fibonacci fans would suggest that it will soon find resistance there. I don't disagree, but if the indices also bounce, they could help it bust out to $92 per share. First and foremost, FSLR must remain above $61 or it could collapse. I don't see this as a possibility unless the markets crash too.

Last week's candle was an amazing doji, which points to severe indecision. This week FSLR shares decided that up is the way they want to go. The range from last week's doji is from $63 to $77 per share. If shares can close this week above that upper limit, they'd have solid footing for another leg higher.