Solar-powered cars might soon be coming to the UAE as Netherlands-based company Lightyear has partnered with the Sharjah Research, Technology, and Innovation Park (SRTI Park), an incubation hub for tech startups.

Solar-powered cars might soon be coming to the UAE as Netherlands-based company Lightyear has partnered with the Sharjah Research, Technology, and Innovation Park (SRTI Park), an incubation hub for tech startups.

Lightyear is developing the word's first solar car, Lightyear 0, powered by traditional electric charging and solar power. With solar panels covering its roof, bonnet and boot, the car can be charged while driving. According to its release, it requires only 1,500 kilowatt-hours per year, making it twice more efficient than the Tesla model S, the equivalent in its category. Described as a production-ready solar electric vehicle, it can be driven for months in the summer before needing to be charged. It has a top speed of 160 kilometers an hour and accelerators from zero to 100kph in 10 seconds.

The startup and SRTI Park have signed a Memorandum of Understanding (MoU) to establish Lightyear's global expansion and indicate Sharjah's role in enabling the development of UAE's efforts in sustainable mobility solutions. With the partnership, Lightyear plans to establish testing facilities and sales and service support across the MENA region. In addition, the two entities aim to set up university research exchange programs on solar-powered electric vehicles (EVs), and advance policy initiatives that encourage government incentives for EVs, including solar-extended EVs. 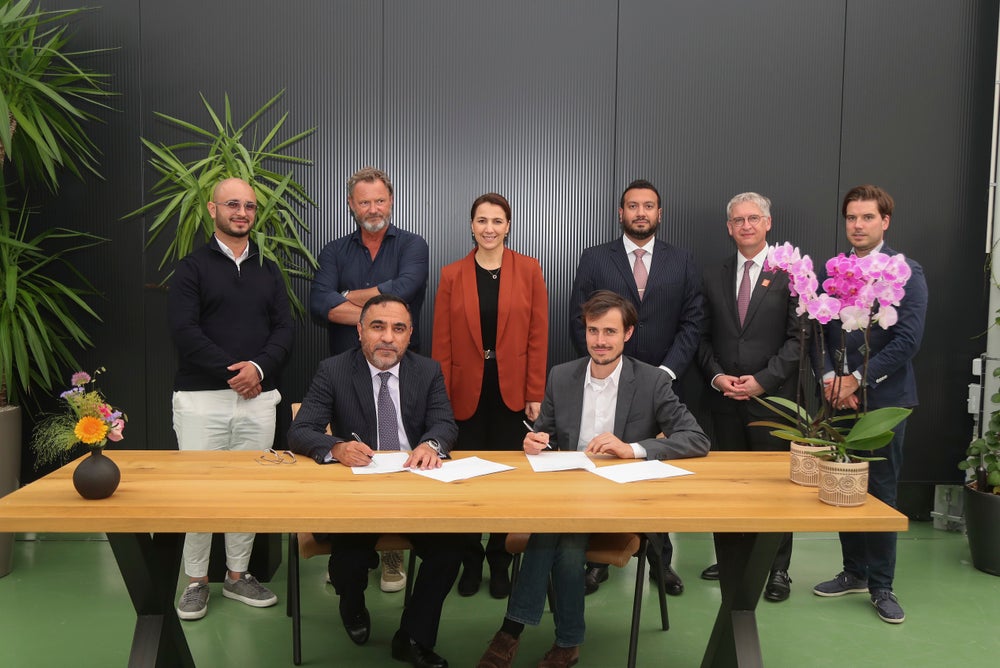 The MoU was signed by Hussain Al Mahmoudi, CEO of SRTI Park, and Lex Hoefsloot, CEO of Lightyear, on June 13 in the Netherlands, in the presence of H.E. Mariam bint Mohammed Almheiri, UAE Minister of Climate Change and Environment, Jamal Al Musharakh, UAE Ambassador to the Netherlands, and Lody Embrechts, Ambassador of the Netherlands to the UAE, with facilitation by consultancy firm Sawadi Ventures.

"The UAE has created a holistic innovation ecosystem that helps companies develop and scale up trailblazing solutions," said H.E. Mariam bint Mohammed Almheiri on the partnership. "Today, it is a hub for top-notch competencies and scientific innovations, particularly those related to clean energy…. We are pleased by Lightyear's decision to set up its first base outside the Netherlands at SRTI Park, and wish the company success in its endeavors."

The UAE, as the world's third-largest producer of solar power, is the ideal place to test Lightyear's patented solar technology, said Hussain Al Mahmoudi, CEO of SRTI Park. "We are confident that Lightyear's presence at SRTI Park will spark interest among all countries in the region to embrace EVs," he added.

The first batch of Lightyear cars is reportedly expected to be delivered to customers in Europe in November at a cost of US$262,000.