It's probably nothing new to hear that organizations that don't safeguard themselves from digital risks stand to lose a lot- but what might be more pertinent to note in our current circumstances is the sheer rise in cybercrime of late.

Patrice Caine is the Chairman and CEO of Thales, the Parisheadquartered multinational that offers solutions, services, and products for the defense, aeronautic, space, transportation, and digital identity and security markets, and from his vantage point, he has lately witnessed a lot being said about the benefits that the digital acceleration triggered by the COVID-19 pandemic has brought to the world at large. And while Caine agrees with the notion that a lot of good has come out of this revolution in the way we live and work, he points out that it has also brought forth a multitude of bad actors who are seeking to exploit the inherent vulnerabilities in this new digital landscape- and that's something he believes businesses operating in "the new normal" need to absolutely be wary about.

Caine underscored this idea at the latest edition of the Thales Media Day, with the event held in Paris in May hosting insightful discussions, as well as hands-on demonstrations centered on the criticality of cybersecurity in a world that has undergone a lot of change since the COVID-19 crisis hit in 2020. "The acceleration of digitalization is obvious," Caine says, in an interview with Entrepreneur Middle East. "It was already the case before the COVID-19 crisis, but the pandemic has clearly accelerated this transformation."

But these changes have brought with them significant security challenges too- flexible working, for instance, opens organizations up to potential hacks by virtue of its employees working on unsecured networks. Similarly, collaborative work in the online realm can result in confidential or sensitive data lie exposed to nefarious players on the cloud systems that are used for this purpose.

Now, it's probably nothing new to hear that organizations that don't safeguard themselves from the aforementioned digital risks stand to lose a lot- but what might be more pertinent to note in our current circumstances is the sheer rise in cybercrime of late. A Thales statement states that the number of cyberattacks and ransomware incidents has seen an increase of over 150% in the last 12 months, while the cost of cybercrime for the global economy has more than doubled since 2019. Such trends have been closely watched by Thales, which, as a global leader in cybersecurity, has six centers around the world focused on this domain, which employ over 3,500 engineers working on everything from guaranteeing data integrity and confidentiality for businesses, to protecting the national sovereign interests of countries around the world.

Caine highlights here that the Middle East has been a key market for Thales' various offerings for a long time now, with its operations in some of the region's countries like the UAE, Saudi Arabia, Qatar, and Egypt spanning more than 50 years. And its longstanding presence here has lent itself to what Caine believes to be a key ingredient for Thales' continued success in the region: trust. "Historically speaking, our customers were defense customers," Caine explains. "Now, it's much more than that- it's defense, space, aerospace, digital identity, security, and more. In such sovereign, sensitive, or strategic domains, the notion of trust is absolutely critical, and I think that's what we have been able to develop with our partners and customers in the years we've been in the region."

Related: Why Startups Should Consider A Cyber Resilience Strategy 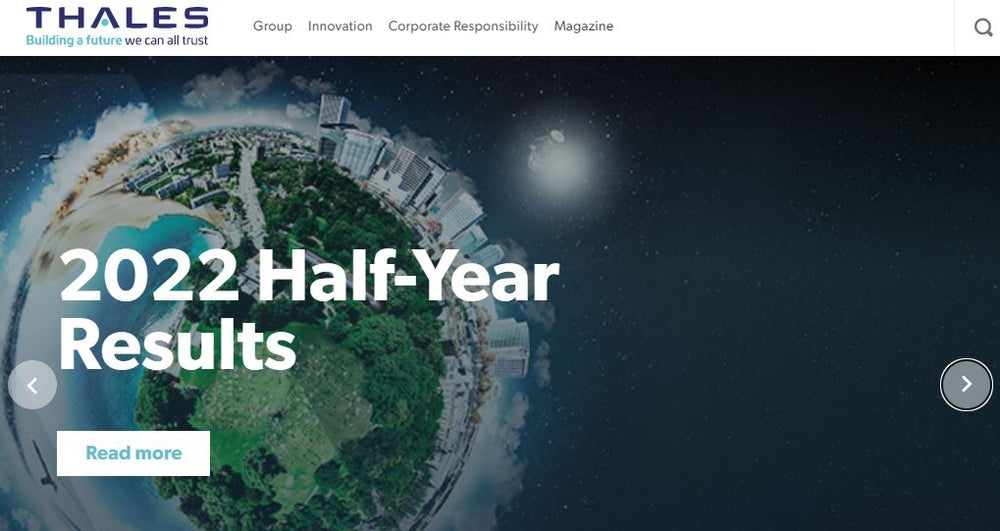 A cursory look at Thales' operations in the Middle East is enough to validate this point. The company has over 2,000 of its employees on the ground in the region, and its offerings are in use in a number of critical industry sectors. In transportation, for instance, the UAE's Dubai Metro -which, by the way, is the longest driverless metro in the world- is equipped with an entire package of solutions from Thales, as is the Doha Metro in Qatar. At the same time, Thales' security solutions are being used at airports in Dubai, Doha, Muscat, and Salalah, while its satellite communications arm -Thales Alenia Space- contributes to the operations of regional players in this realm like Arabsat, Nilesat, and others.

These are only a few instances of Thales' work in the Middle East, but Caine says it's thanks to the successful delivery of projects like these that have helped his company enjoy the standing it has in the region today. "Generally, you do not give away, or give for free, trust," Caine explains. "You build trust with time. And this is one of the strongest assets of Thales- this is our legacy, this is our history, this is the result of our decisions in the past in that, no matter what the geopolitical situation was, to continuously be at the side of these countries and their leaders."

However, Caine quickly adds that Thales' track record isn't the only reason for its continued success in the region. "If these countries turn to us beside or beyond trust, it's also due to our technological excellence," he says. "Because they have the luxury of choice- they have not only one trusted partner, they have several trusted partners. And so, if and when they turn to us, it's clearly because they recognize our technological excellence."

But Caine adds here that there's a third factor that has allowed Thales to be the partner of choice for so many of its clients for so many years- and that lies in the company not treating its relationships with clients, especially those that are nation states, as purely transactional. "We have always been very proactive not only to sell our products and services, but also to share our technology and know-how," he explains. "It's a clear win-win." 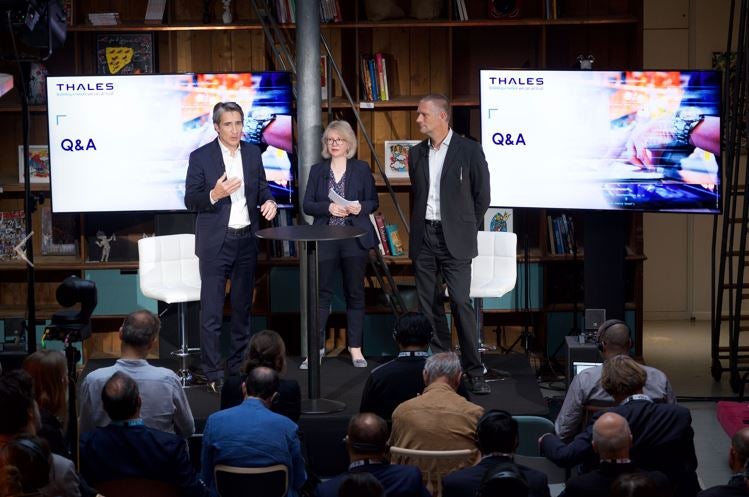 This mindset would explain the creation of Thales Emarat Technologies in the UAE in 2019, which, while being a 100% local company, is allowing Thales to embed itself in the country in the areas of industry and innovation, as well as in education through its Radar Center of Excellence. Another example can be found in Saudi Arabia, where a joint venture between Thales and Saudi Arabian Military Industries is working towards realizing the goals set up by the Kingdom's Vision 2030.

Again, these are just two examples- one can find several partnerships and joint ventures that Thales has engineered littered across countries in the Middle East. And it's a similar mindset that governs Thales' approach when it comes to working with startups, especially those in the cybersecurity realm- as Caine put it at the outset: "We see them as partners." And while Thales may have been recently in the news for its buy-out of European cybersecurity startups, S21sec and Excellium, for EUR120 million in May this year, Caine reveals that acquisitions are not the route his enterprise often takes in the entrepreneurial arena. "We recognize the added value of a startup by working with them," Caine explains. "Indeed, we recognize the fact that most of the time, they have more value for us outside Thales, than inside Thales."

Caine is alluding here to the different manners in which startups and corporates operate, and how mixing the two is almost always a difficult endeavor- in fact, he notes that the smaller business also often stands to lose some of its innate entrepreneurial features amid such an effort. And that's why Thales seeks to build win-win partnerships with startups, wherein the former gets access to cutting-edge technologies, while the latter gets to operate in the setup that makes the most sense to them.

Having said that, in terms of characteristics that startups should copy from their larger peers, Caine urges them to follow the latter's lead in terms of safeguarding themselves in the online realm. "Do care about your cybersecurity, because the risk of being attacked is not a theoretical one, despite your small size, or notwithstanding your small size," Caine says. "Don't think that just because you are small, you are not a target. In fact, cyber criminals are lazy- they prefer weak targets than strong ones, and smaller companies often fall in that first category. So, please care about your cybersecurity- it's not just a theoretical risk, nor is it only for larger players."

Related: Safeguarding Digital Identities: Why Data Privacy Should Matter To You (And Your Business)