This national park in Kentucky has the longest known cave system in the world--365 miles and counting. Ready for a hike?

December 27, 2005
Opinions expressed by Entrepreneur contributors are their own.

The ceiling was inches from my hard-hatted head; the reporter's notebook in my back pocket kept catching on protruding rocks, and off to my left was a 6-foot drop that could certainly break a limb or two. My glasses were fogging up, I was wriggling on my belly, and I was pleased as could be.

It was about an hour into the 3 1/2-hour "Intro to Caving" tour at Mammoth Cave National Park in southern Kentucky. Guided tours range from a lantern-lit amble ($11) to the six-hour "Wild Cave Tour" ($46), with "hand and knee crawls over jagged rocks and dirt." I chose the introductory level ($23) because you have to crawl only over "rough" rocks, not "jagged" ones.

Striking off through unlit caverns, we walked along wide Gypsum Avenue, with flower-shaped gypsum crystals on the walls and ceiling. Fossils appeared every now and then, a remnant of the region's past at the bottom of the ocean. Crawling through low, wide passages over rough rocks and fine, soft river sand, I greatly appreciated my hard hat and my kneepads. On a rest stop, we turned off our headlamps and sat in silence for a few moments in the absolute darkness of underground.

Mammoth has the longest known cave system in the world--365 miles and counting, all tangled under a 7-by-7-mile patch of land. Sinkholes and caves spot the area. When ocean covered low-lying parts of the continent hundreds of millions of years ago, sea creature skeletons settled to the bottom to make a thick layer of limestone. The cave formed in this layer as water dribbled from above, then rushed along in rivers and streams, creating a path through the stone. A later river delta deposited sand that turned into a cap of sandstone, which protects old caves as the water table falls lower and lower, dissolving through lower levels of limestone.

Our tour stuck to high, dry parts. Well, mostly dry. After another hour and a half of wandering, crawling, and occasional slithering, we got to the Keyhole, which our guides had warned us about. After a recent rain, the floor was muddier than usual. I jammed my head side-ways through the ludicrously tiny hole and clawed over puddle-pocked rock to emerge triumphant, muddy, and--oddly--with not a hint of claustrophobia.

We joined the tourist paths near Frozen Niagara--where glossy swoops of stalactites and flowstone swing down the walls like icing on a wedding cake. As other visitors gawked at our muddy clothes, we headed for a revolving glass door into the scent of honeysuckle.

The Ins and Outs of Mammoth Cave National Park

Mammoth Cave National Park is a 1 1/2-hour drive from Louisville, Kentucky, or longer if you take the tree-lined scenic route past Lincoln's birthplace of Hodgenville-and about the same from Nashville.

The Introduction to Caving tour usually sells out, so it's a good idea to make reservations ahead of time. Park information and tour reservations are at nps.gov/maca The park doesn't charge entry fees, but cave tours cost from $4 to $46. The cave is about 54 degrees year round, but you'll stay warm enough on the Intro to Caving tour without a jacket. The park doesn't allow backpacks or fanny packs in the cave; check other restrictions online. Accommodations are available in the characterless but convenient Mammoth Cave Hotel, right in the park, or in nearby Cave City. And, of course, this is a national park, so you can rough it in the campground if you prefer. 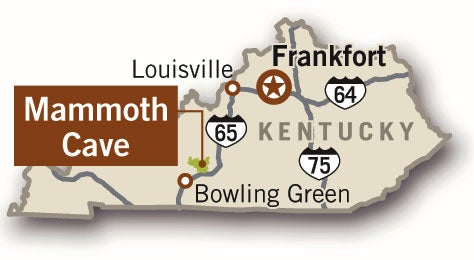