Alaska: An Ice Day for a Hike

December 28, 2005
Opinions expressed by Entrepreneur contributors are their own.

That was my first surprise as I stepped onto Root Glacier in Wrangell-St. Elias National Park and Preserve. The ice crackled like potato chips as I inched forward with crampons strapped to my hiking boots.

The next discovery was even better. The steel spikes on the crampons gripped so well I could walk up near-vertical slopes like a sticky-toed gecko. In a few minutes, I was tramping across a surreal moonscape of solid ice pocked with turquoise pools.

I dreaded crossing the melt-fed creeks that coursed across the glacier and plunged into crevasses. I didn't need a glaciologist to tell me that if I slipped, I wouldn't come out the other end for a few hundred years. "This is part of the fun!" said Mike Murphy, head of Kennicott Wilderness Guides, who led the half-day glacier hike. Mike wrestled a boulder into the stream to get me across a torrent that seemed 10 feet wide (but was surely less than half that).

I took a deep breath and jumped.

Wrangell-St. Elias is among the least visited national parks, with just 57,000 visitors in 2004. It doesn't help that it's literally at the end of the road, at best a seven-hour drive from Anchorage. But Wrangell-St. Elias may well be the most Alaskan place you'll ever see. It's America's largest national park, with 13 million acres of wilderness--an expanse larger than Switzerland. It encompasses North America's greatest collection of peaks above 16,000 feet, including 18,000-foot Mount St. Elias. There are more than 100 major glaciers, one larger than the state of Rhode Island. Its Kennecott national historic site was once the world's richest copper mine. And the park houses some of our greatest national treasures--free-thinking, cantankerous Alaskans.

The National Park Service and big tour operators plan to increase visitation to reduce crowding at Alaska's marquee park, Denali. So the state is upgrading 60-mile McCarthy Road into the park. Once billed in guidebooks as the worst road in America, it's a one-lane gravel track down the old Kennecott mine railroad bed, with spikes still surfacing to puncture tires. On the two-hour drive, my only complaint was that it was too bumpy to drink my Diet Coke.

Hoof It
The road ends in a quintessentially Alaskan way--at the Kennicott River, with the town of McCarthy and Kennecott mine on the far side. For years, the only way across was via hand-pulled tram. Residents argued fiercely over whether the tram was a threat to life or a defense against tourist-infested minivans. In 1996, they compromised with a footbridge. Shouldering my pack, I walked the half mile into town.

McCarthy, summer population perhaps 100, has a scattering of charmingly dilapidated buildings along the dirt main street. Eighty-five years ago, it was a business center catering to the thousands who came north to make a fortune, or maybe a living, mining silver, gold, and copper. After decades of decrepitude, McCarthy is growing again and delivers a range of comforts remarkable considering its location: halibut cioppino, hot showers, and Wi-Fi Internet access--even though residents must generate their own electricity or do without.

The defunct company town of Kennecott, 5 miles up the valley, is caught in the past. In 1900, two prospectors discovered green cliffs on the Kennicott Glacier's east edge; they were 70 percent copper ore, one of the richest deposits ever found. From the mine's opening in 1911 until 1938, it produced at least $200 million of ore. The park service, which took title to Kennecott in 1998, is restoring some buildings, letting others crumble. For now, visitors can roam at will. I spent an hour nosing around dangling tram wires and mounds of giant, rusting pulleys.

It's hard to grasp the notion of a national park the size of Switzerland. I'm glad I took the advice of Neil Darish, co-owner of McCarthy Lodge, and shelled out $135 for a 70-minute sightseeing flight. Pilot Gary Green, gray hair flapping beneath his cowboy hat, seemed a gentle soul. I changed my opinion once he flew his Cessna 180 straight at the shimmering icefall on the Russell Glacier, closer and closer, while I stifled the urge to shout: "Turn!" Finally he did, the wings missing the mountainside by what felt like inches. People in McCarthy say Kennicott Glacier is a few hundred feet lower than it was a decade ago. Global warming is the likely culprit. Looking through the plane's window at a scene vaster than 100 Grand Canyons, I found it difficult to believe that humans could affect it one bit.

On the front porch of the McCarthy Lodge that evening, a park service interpreter mentioned that a black bear had strolled down Kennecott's main street at 5 p.m. Flatbed Larry explained that he'd gotten his name because there were just too many Larrys in McCarthy. The attributes of Alaska serial killers were discussed, with the nod going to the "Butcher Baker," who invited young women on airplane rides and then hunted them. Barmaid Rebecca Bard brought out another round of Alaskan Amber, ignoring the mosquitoes that hovered around her shoulders, bare in a halter minidress. She grew up in Dayton, Ohio, but once she discovered McCarthy, she settled in. "What's more fun than coming to the end of the road?"

The Ins and Outs of Wrangell-St. Elias National Park and Preserve

When I decided to go to Wrangell-St. Elias National Park and Preserve, my first thought was "road trip!" The 300-mile drive from Anchorage will take a day, but it's a great opportunity to see a spectacular swath of Alaska's interior, from the Chugach Range and the Matanuska Glacier, visible from the Glennallen Highway, to Mount Wrangell, a live volcano inside the park itself. No McDonald's; instead you can chomp a burger at historic roadhouses like the Copper Center Lodge, which was founded in 1897.

The park's new visitor-center in Copper Center offers information on natural history and recreation (nps.gov/wstl), and a view of the Copper River and the Wrangells. Down the road, the scruffy outpost of Chitina is the last chance to stock up on Doritos and gasoline for the 60-mile drive down McCarthy Road. This one-lane gravel track was formerly the right of way for the rail line to the Kennecott mine, completed in 1911. Just after Chitina, check out the people fishing for salmon by the Copper River bridge-native Alaskans use fish wheels upstream, while good ol' boys are wading with dip nets downstream.

The road is in much better shape than in years past, but check your car's spare tire before you head out to make sure it's in working order; you're on your own as far as car repairs go. The Kuskulana River bridge offers the biggest thrill en route-its narrow trestle spans a 238-foot gorge. Stop at the far side and walk back across for an extra shiver. If that's not spooky enough, talk to a longtime McCarthy resident like McCarthy Air's Gary Green, who can tell you what it was like driving the bridge back in the 1970s, when there were no guardrails and some of the railroad ties were missing.

Capitalism is thriving at the end of the road. Parking ranges from $10 a day, right next to the footbridge across the Kennicott River, to free, a halfmile back. You can walk into town, rent a mountain bike at the Glacier View campground, or call your lodgings for a van pickup on the far side of the bridge.

Accommodations are surprisingly cushy, considering that this is the Alaskan bush. The two big players are McCarthy Lodge, which offers private rooms with shared baths in a historic 1916 building, as well as a backpackers' hostel. The lodge's bar serves light meals like Alaskan Amber battered halibut ($14), and the restaurant features unusual main courses like orencini, a Sicilian specialty of fried risotto balls with a meat ragu ($14). Prices are a bargain for the locale; draft microbrews are $4. Five miles up the hill in the Kennecott company town, the Kennicott Glacier Lodgeoffers rooms with shared bath and a spectacular view of the Kennicott and Root glaciers below. Chow is great here, too, with noshes like fresh Copper River salmon with sun-dried tomato pesto and pasta rags, and chai creme brulee for dessert.

But you didn't come here for the creme brulee. A flight-seeing trip would be a frill in most other destinations but is almost essential here for getting a sense of the vast wilderness that surrounds McCarthy. Pick either Gary Green's McCarthy Air Service, or Kelly and Natalie Bay's Wrangell Mountain Air; both have been flying these mountains for decades. Wrangell Mountain Air also offers daily flights from Chitina to McCarthy for people who don't have the time or the patience to drive the road.

Terrific hikes abound. Many of the more popular ones, like Skolai Pass, require being dropped off by a bush plane. It's easier and cheaper to start off by hiking the trails around McCarthy and Kennecott, including the Root Glacier and Bonanza Mine trails. Kennicott Wilderness GuidesSt. Elias Alpine Guidesoffer half- and full-day glacier explorations, as well as overnights on the glacier and fly-in backpacking. St. Elias also offers tours inside the Kennecott mine's buildings, which can be explored only in a group tour. Both firms have offices on Kennecott's main street. 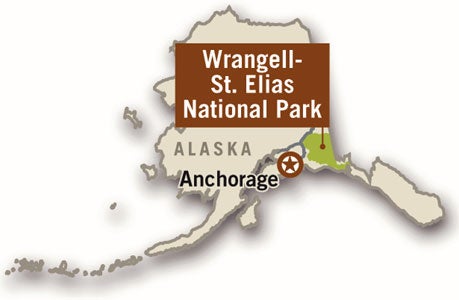