Ordinary can be interesting

February 6, 2006
Opinions expressed by Entrepreneur contributors are their own.

It's taken a while. But once again, Ford has a winning sedan. The Taurus, of course, was the mainstay of Ford's passenger car fleet for nearly 20 years. Ford decided to phase it out in favor of something fresher. The bulky Five Hundred rolled into the void last year, an interesting vehicle with high "command" seating and lots of space. But it turned out not to be a graceful or particularly stylish ride, and its clunky V-6 engine is uninspiring. The Fusion makes up for those shortcomings. While not a blow-away design, the Fusion is handsome enough that my 9-year-old daughter noted, "Hey, cool car," when she first climbed in. (Kids know.) The interior is middlebrow but attractive, pleasant, and comfortable-a match, or better, to the comforts offered by competitors like the Toyota Camry, Honda Accord, and Chevrolet Malibu. The Fusion starts at an attractive $17,795, and for about $20,000 it can be outfitted with nice options like a six-CD changer, audio controls on the steering wheel, and big, stable 17-inch tires. And for just over $21,000 you can upgrade from the modest 160-horsepower four-cylinder engine to a peppy 221-horsepower V-6.

A lot of ride for a decent price makes the Fusion a nice value, but its road manners make it a nice car. The Taurus was solid but bland, and the Five Hundred did little to improve on that. The Fusion is a showoff by comparison--with a little something to show off. The steering is tighter and connects the driver's hands to the road beneath, without the kind of harshness that might turn off midmarket buyers. The Fusion enters corners like it actually wants to be there. It's enjoyable to pilot through curves. Its size hits the sweet spot, too--small enough to be agile on the road, big enough to comfortably house four adults and a couple of big suitcases. Mid-priced sedans tend to be a bit dull no matter what--they're the ultimate everymobile--but the Fusion can add a spark to your commute, if you want it to. And if you don't, you'll be happy with it too. 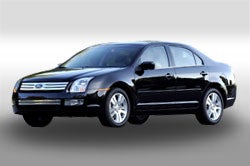 2006 Ford Fusion
Nits: Antilock brakes are optional. This basic safety feature should be standard on what is essentially a family car.

G forces: The base engine is a 160-horsepower four-cylinder, an economical option that offers about average power for this class. The V-6 is a sprightly 221-horsepower model that comes with a six-speed automatic transmission, an advanced combo that allows gas mileage in the mid-20s along with crisp, responsive power. Handling is firm and enjoyable. One shortfall: A wide turning radius makes it hard to pull a U-turn without backing up.

Gizmology: There's nothing special-or offensive-about the Fusion's dashboard controls. Practicality abounds, with multiple cupholders, roomy storage spaces, and armrests that are soft and easy on the elbows.

Kidmarks: The back seat is easy to get into and out of, kids can manage the doors, and the trunk will easily fit a large stroller. Rear cupholders reside in the middle armrest, the most convenient spot.

Hot or not. Hot. But that's only compared with yawners like the Toyota Camry and the Chevy Malibu.

Envirometer: Mileage ranges from 21 mpg/city to 32 mpg/highway. The Fusion ranked 161 out of 477 on U.S. News's Muscle per Gallon Index. The EPA rates most models of the Fusion average for air pollution and above average for emissions. Details are at www.fueleconomy.gov.