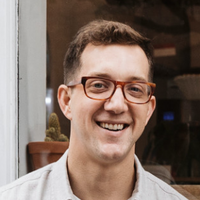 Before founding Colugo, Ted Iobst was a strategist and business leader who rose to a Vice President position at Atlantic Media. There, he built and led digital and custom content businesses. After leaving that role to pursue his MBA at The Wharton School, Ted’s life took a dramatic and happy turn when he and his wife welcomed their first children, twins Fritz and Lark.

As new parents, Ted and his wife were left feeling like they overpaid for products they weren’t even sure would work for their family. Unable to find a single brand that felt right, Ted was inspired to build a new brand for a new generation of parents – and Colugo was born. Bringing this vision for Colugo to life keeps Ted busy, especially after he and his wife welcomed their third child, Win.