Guy Fieri, Cable's Highest-Paid Chef, Hopes to Save His Industry With 'Restaurant Reboot'

The eclectic entrepreneur and restaurant-industry advocate talks about rallying his high-profile friends and raising money with a multi-platform live-streaming broadcast on June 12.

When Guy Fieri Zooms into your living room from his home office in Santa Rosa, CA, it's hard to know where to look. There's the man himself — with his signature spiky 'do, sporting a tee for his spirits brand Santo Tequila. Then there's the short-haired cat on his lap that he's stroking as if he were a culinary Dr. Evil. And then there's the wall covered in framed media clippings and personal memorabilia. There's a lot going on here, which is fitting for this larger-than-life personality. Over the past 25 years, Fieri has established himself as both a populist restaurateur and enduring face of the Food Network with shows including Diners, Drive-Ins and Dives, Ultimate Recipe Showdown and Guy's Grocery Games.

Beyond the kitchen and the camera, Fieri has been a relentless advocate for causes ranging from LGBTQ rights to small-business survival. And after partnering with the National Restaurant Association (NRA) last spring to form the Restaurant Employee Relief Fund, Fieri and the NRA (along with the California Restaurant Association) are now turning their attention toward helping restaurant owners themselves bounce back from the pandemic. 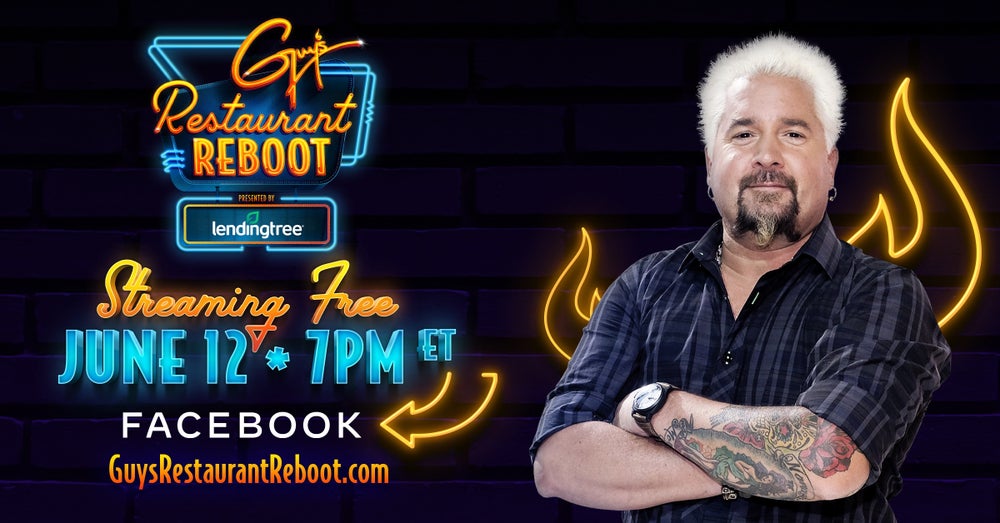 Guy's Restaurant Reboot, which was formally announced this morning, is a live-streaming event presented by online marketplace Lending Tree (other sponsors include Pepsi and SpotOn) that will be broadcast June 12 at 8 p.m. EST via Fieri's myriad digital and social platforms (Facebook, YouTube, Twitch, Twitter et al). Starting today, qualifying restaurateurs can submit applications to receive a portion of the funds raised by Fieri and the NRA, which are being earmarked as Help Rebuild Restaurants Grants and will be awarded to mom-and-pop entrepreneurs during Restaurant Reboot.

In our Zoom interview, the 53-year-old iconoclast, who just signed a new megadeal with the Food Network that makes him cable TV's highest-paid chef, talked about the daunting task ahead of restaurateurs and how he and his cohorts set about modeling a collaborative path forward.

Related: Guy Fieri Is Insanely Busy. Here's How He Gets It All Done.

Mask mandates and indoor-dining restrictions are being lifted across the country. If you're a restaurant owner, is that a mixed blessing? How do you suddenly retrofit your business for what it was like pre-pandemic after so many adaptions?

Not to take you right into Restaurant Reboot, but that's what this whole event is about, and I'm bringing in a bunch of chefs to talk about it. You have different groups, different states, different laws, and there's all kinds of messaging coming out. So at any given time, it can be a little bit of a knee-jerk. But let's first and foremost remember how much we love restaurants. Restaurants are the fabric of our communities. Restaurants employ so many people, so many single families, so many students, so many retirees, so many second jobs. And on top of it all, we get so much personal pleasure out of them. So let's celebrate restaurants. That's one of the first things. Secondly, let's talk about what has happened. There's no one single recipe that's going to solve this because we have people working at different levels — some with money, some without money, some with a bunch of staff, some without staff. There's restaurant pictures up on the internet where they're saying, "Sorry, we're unable to open because we don't have employees. If you would like to work here in a fast-food restaurant for $25 an hour, please call us."

I mean, that's crazy, man. I've been in this industry my entire life, and I've never seen anything like this. So we got a couple of other challenges that we maybe weren't anticipating as much. So there's going to be a lot of discussions, but the whole inspiration behind Restaurant Reboot is: information, awareness, celebration, participation. I want to show the industry that all these big companies are behind you.

People have gotten so accustomed to no-contact delivery, curbside pickup, innovating outdoor dining, etc. How do you reconnect people with what they loved about the traditional experience of going out to eat?

Sometimes you have to really explain to people: That little place you'd go since you're a kid, owned by that great couple and their kids worked there? Well, believe it or not, they may not have got a break on their rent. They may not have got PPE. They may be ready to close tomorrow and you don't know. So give them some love, pay attention, find out what's going on. As much as you think they are there for you, it kind of goes the other way too. You're there for them.

Do you think there's a misperception that Paycheck Protection Program loans simply made a lot of restaurants whole?

Someone was asking me the other day: What is one of the things about the restaurant industry that people don't know? And I'd say that the margins are so low. Restaurants are happy to make 5-7% to the bottom line. So when you go in and you have a $100 dinner — you know, bottle of wine and a couple of entrees, you really enjoyed yourselves and, wow, you're leaving a hundred bucks and a nice tip — the restaurant is making anywhere from five to $10 off that, for all the efforts that they did.

I've always been in the industry because I love food and I love to cook and I love to make people happy. And I can tell you, especially with Diners, Drive-Ins and Dives, so much of why people are in the businesses is because they love taking care of people and throwing the party. But I remember when I opened my first restaurant, an old-timer said to me, "You know the best way to make a small fortune in the restaurant business? Start with a large one."

To that end, is Restaurant Reboot eyeing potentially new businesses along with established ones that are struggling?

A lot of the money that we're giving out is going to be people who have a new business who want to get into the game and need a little kickstart money. You need a little prime money to get things rolling, so we're going to make a lot of things happen with this.

So when it comes down to it, who is determining where and how the money gets allocated, and how much are they considering the needs of minority-owned businesses that were particularly overlooked in the PPP rollout?

To not convolute things, Medium Rare, along with my company Knuckle Sandwich and all of our great chefs and partners, we said: Let's do what we do really well. Let's not be involved in trying to understand who should get the money. So we went to the National Restaurant Association, along with the California Restaurant Association. They're the ones that have created the breakdown of how this is going to be dispersed.

These folks know what they're doing. They are tapped directly. They are the leader in understanding where, who, why and what needs this money and where it's going to happen. This is still the gateway. We're going to have some of the recipients on Restaurant Reboot, so it'll be pretty cool.

Did you consider having small-business owners participate in these conversations with yourself and the celebrity chefs?

Well, we're trying to put 10 pounds of groceries into a five-pound bag. Trust me, if this thing was going to go as long as we wanted it to, it would be an all-day telethon. You know, when you find people who are legends in sports or broadcasting or music, and they all have this relationship with a restaurant or a story about where they went when they were a kid, it just shows how deep this runs in our communities. And again, that's the whole genesis of the Restaurant Reboot.

Back to those margins, what do you think would be the best way for a Restaurant Reboot grantee to constructively apply that money they receive?

So they don't go buy lottery tickets with it? [Laughs] I don't know, but I do know that the vetting that's happening is going to be deep. And we've seen some of the profiles, and they're all types of situations. You think about a restaurant that's been closed for a year, rules and regulations change. I can't even begin to tell you the list of things that restaurant owners face, and sometimes it can be something simple as we can't get booze in our restaurant. Typically, in some areas, that's a really critical factor. So maybe that's where [the need] is. But every bit of awareness, every bit of consideration and every bit of recognition, financially or not, is going to be the real heart of what this whole thing's about.

What would you say to restaurant owners thinking, "Wait, now I need to break down all these outdoor tents and put the sidewalk heaters in storage?"

I have no clue except to say this: Fortunately, people who run the cities and counties in these areas are becoming aware of how many knee jerks the industry's taken. I live in a little area here in California, and I was driving through the downtown and I saw all the parking spots taken up by these outdoor patios. We just really increased the footprint of a lot of restaurants. Some areas are allowing them to keep these outdoor spots. So at least somebody who dropped 50 grand on building this nice outdoor pavilion and patio and putting up heaters and covered walls is going to be able to keep going with it. There's not one situation that is the same as the other, but I think that the restaurant industry is a bunch of people who have adapted to overcome, and I think we're a great inspiration for other industries because we're making it — we're going to make it.