Louisiana Economic Development | Brand Spotlight Partner What is this?

It's LED's mission to make its state a place for growing businesses to come and to thrive.

Sometimes the best way for a company to grow is with help from a knowledgeable, local partner.

From Baton Rouge, La., Orion Instruments has grown from modest startup to a global manufacturer since its launch in 2001. A provider of high-quality custom magnetic level indicators, Orion has developed a substantial international clientele. And like many other Louisiana companies leading their fields, Orion has taken great strides with the help of Louisiana Economic Development.

"Our focus was always to establish a global reach," Orion General Manager Don Sanders says. "And we've been able to do this from the heart of Baton Rouge."

Orion is not alone. In the last decade, a wave of large manufacturers located in Louisiana have utilized an ingredient mix that includes a multi-modal transportation network, robust workforce development and a variety of custom-fit state incentives that have made it easier to strengthen infrastructure, grow staff and launch new ideas.

For the custom-printed paper bag manufacturer, Ronpak, the decision to select Shreveport, La., as the site of a major company expansion in 2010 has paid off, Ronpak Chief Operating Officer Kevin Wascom says.

With manufacturing facilities on the East and West Coasts of the U.S., Ronpak needed to establish a site that could help it meet additional demand and give it better reach across the central and southern regions of the country. Because the company serves a large number of fast food or quick service restaurants, Dallas emerged as an early contender for the expansion location.

But the north Louisiana city of Shreveport, located just three hours east of Dallas, began to make more sense. LED created a package that helped Ronpak establish a new manufacturing presence in the South and quickly hire a qualified workforce.

Today, the Shreveport site turns out high-quality products for Ronpak's customers and is a showcase facility for prospective clients. In 2012, Ronpak also chose to move its headquarters from New Jersey to Louisiana.

To staff operations, Ronpak leaned on the services of LED FastStart®, the No. 1 state workforce development program in the nation.

"FastStart was absolutely critical to our success in terms of helping us recruit and train, but also in managing the process," Wascom says. "They developed training materials on video and iPads, and worked with our teams to make sure new employees were trained properly." 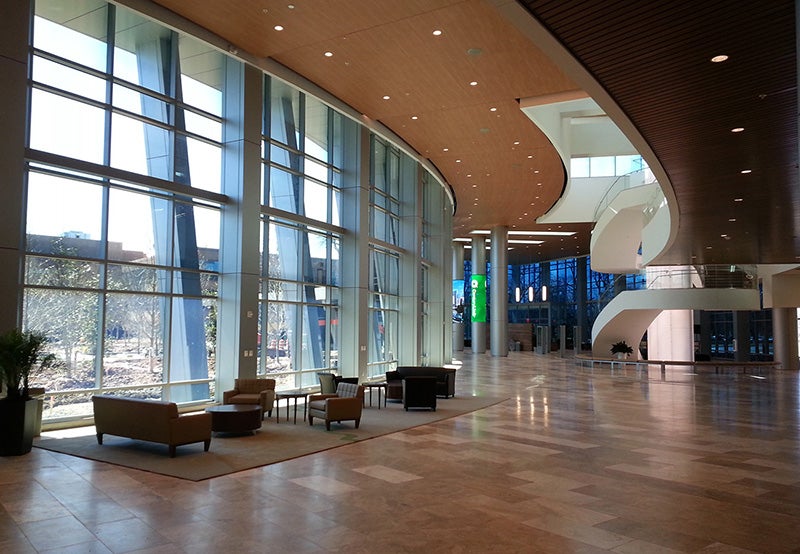 Today, more than 2,500 employees guide CenturyLink from a campus that includes its LEED-certified Technology Center of Excellence and its headquarters building.
Image credit: LED

CenturyLink has grown through a series of key acquisitions and strategic decisions. Louisiana crafted a package for CenturyLink that included assistance with the construction costs for a new facility as well as a comprehensive program for workforce development. Today, more than 2,500 employees guide CenturyLink from a campus that includes its LEED-certified Technology Center of Excellence and its headquarters building.

"We're diversifying in ways that would not be recognizable several years ago," says John Jones, CenturyLink's vice president of public policy and government relations. "And we're working with a lot of key players in the area to brand Louisiana's Interstate 20 corridor as a technology hub that can attract top talent."

Louisiana is investing $4.5 million over 10 years to help CenturyLink and other technology companies expand partnerships and develop targeted curricula with the University of Louisiana at Monroe, Delta Community College, Bossier Parish Community College, Grambling State University and Louisiana Tech University in nearby Ruston, site of the country's first undergraduate program in Cyber Engineering.

"These partnerships are critical," Jones says. "We're committed to a long-term strategy, and we think developing a local workforce is part of the future."

One of LED's and CenturyLink's shared objectives has been to successfully attract top technology partners to the Monroe area, further fostering CenturyLink's ability to grow and amplifying its economic development impact. That strategy is working. In 2015, IBM announced its decision to establish a 400-job Client Innovation Center in Monroe, the anchor tenant of an 88-acre, CenturyLink-affiliated technology park and mixed-use development. The new development will be located along U.S. Highway 165 directly across from CenturyLink's corporate headquarters.

Louisiana's infrastructure, workforce and incentives converge to create a competitive environment that facilitates long-term growth for companies like these across the state.

To find more information about relocating or expanding to Louisiana, visit LouisianaWorksForYou.com.