As India Runs Out Of O2; Mission Oxygen Raises INR 18Cr In A Week

The Indian entrepreneur led initiative has utilized the donations to procure 3900 oxygen concentrators and are aiming to add 2,100 more

Oxygen is the bare essential element that is required for a person to live. It is the fuel that keeps us alive. However, at present in India, a country with around 1.4 billion population, this bare essential element is under constraint. The second wave of the deadly COVID-19 virus has wreaked havoc in this country, with record making new cases being reported daily. The number of daily deaths have also rocketed, forcing crematories to utilize its parking space for funerals.

It has been found out, apart from getting a bed, what is more important and essential is to get oxygen. People going to extremes to get an oxygen cylinder to help their loved ones breathe. At a time like this, a foundation led by startup founders in India – Democracy People Foundation– has kickstarted an initiative called Mission Oxygen via Ketto to crowdsource funds and utilize it to purchase oxygen concentrators (OCs) from China and other parts of the world. Democracy People Foundation is being driven by Snehil Khanor of TrulyMadly, Mansha Kaur of Heart On My Sleeve, Hubhopper founder Gautam Raj Anand, Designhill founder Rahul Agarwal and Varun Agarwal, Satvacart founder Rahul Hari, Sourcefuse founder Gautam Ghai, Cuttlfish founder Shikher Gupta, BeatO co-founders Yash Sehgal and Gautam Chopra. Others include Abhishek Aggarwal of Sheroes, Sahil Mehta of Lattice, Barun Aggarwal of BreatheEasy, Anirudh Rastogi of Ikigai Law, Rudresh Singh of L&L Partners, Uday Raj Anand of Mycrush.fit, Mrigank Tripathi of PeopleStrong and Chaitanya Aggarwal.

The aim was simple, to get these OCs as soon as possible to India and then donate it to hospitals that are running short of oxygen.

The initiative was initially formulated over a WhatsApp group, where the founders realized to assuage the aggravation, oxygen has to be delivered. The initiative was kickstarted on April 23 with an initial target to raise INR 2.5 crore for 500 OCs. 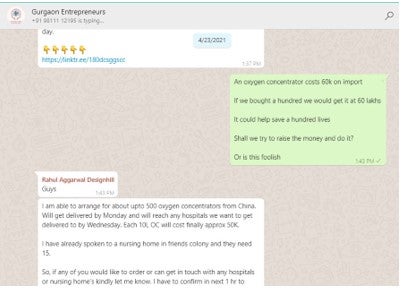 WhatsApp group where the mission was formulated

However, the team is quite shocked or rather overwhelmed with the responses it has received in the form of donation. As of today, seven days after the initiative kicked off, around 18,000 individual donors have donated adding the total to over INR 18 crore, which has been used to procure 3,900 OCs, almost three times the target initially set. The team has revamped their fund raise target to INR 35 crore and will soon order 2,100 more OCs.

Commenting on the latest response Rahul Aggarwal of Designhill said, "We are overwhelmed with the response from around the world. We are humbled by the support of over 18000 people towards this cause. Support us or any other initiative – as help is urgently needed on the ground. Everyday the numbers that we bring is exponentially proportional to the number of lives that we can save."

The fundraiser has seen support coming from Bollywood celebrities, including actor Taapsee Pannu, Abhishek Bachchan and Kunal Kapoor, among others. Cricket legend Sachin Tendulkar has come in support of the cause. 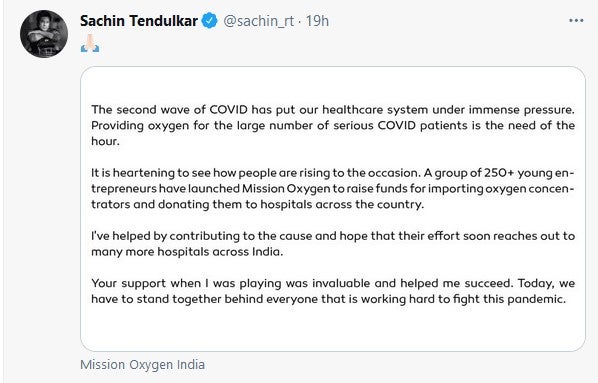 The group has worked round the clock and has collaborated with logistics partners such as Spicejet, Flexiport, DHL, and Delhivery to make sure 3,900 live saving OCs are delivered. The first shipment of 500 OCs will be received this week and the remaining 800 will be brought to India next week. 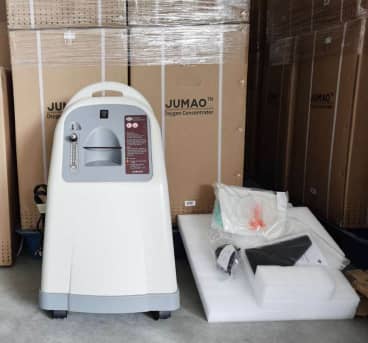 As part of Mission Oxygen initiative, the body has also donated an oxygen generation plant which will be setup in Deen Dayal Upadhyay Hospital in the national capital. The initaitve has also been praised by the Indian government.

Analyzing the scenario, the body has been able to aggregate demand and have put in place a team of volunteers who will look after OCs and will provide it to patient and nursing homes.

As the second wave grips the country, with COVID-19 cases yet to reach peak, more and more oxygen will be required to cushion the healthcare sector and save more lives. It has been analyzed that India will require around 1.5 lakh OCs pan-India.

Here is the link for you to contribute for the cause