A Battery Franchise Gets Juiced

By Jason Daley
July 19, 2010
This story appears in the August 2010 issue of Entrepreneur. Subscribe » 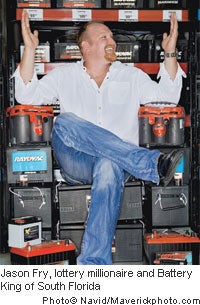 For Jason Fry, 2008 was a bad Hank Williams song. The Florida native was working three jobs--bartending, pouring concrete and digging wells--and still faced bankruptcy. The housing bubble put a sure-thing investment property underwater; he was expecting his second child; and his marriage was on the skids. Christmas was just three days away. "I don't know why, but I bought a lottery ticket," Fry says. "It's something I've only done a handful of times in my life."

That whim turned out to be a $47 million payday. For the next year, Fry did what you'd expect a millionaire in his 30s to do--he bought a boat, an Escalade, a Shelby Mustang, a motorcycle and a house in Fort Myers. He played golf every chance he got and invested in a driving range with a golf pro.

But the life of leisure made Fry antsy, so when an old college roommate showed him around his Batteries Plus operation in Orlando, the seed was planted. Fry went back to the golf course, but when he found out the franchise had the Cape Coral area available, he bought the territory and persuaded the owner of the Fort Myers location to sell.

Two years after his big win, with two Batteries Plus franchises up and running and plans to open stores in Coral and Bonita Springs over the next year, Fry is well on his way to becoming the Battery King of South Florida--and a scratch golfer.

A battery franchise? Really?
I lost a lot of money when the stock market crashed and through other bad investments. I figured this is kind of a recession-proof business. People always need batteries. I feel better investing in a battery store than the stock market, that's for sure.

Your stores are doing well. Do you have a secret?
Our Fort Myers store, which has been open for 14 years, has been the highest-grossing store in retail in the whole chain since I took over March of 2009. I attribute our success to customer service. In this day and age, that's what people are looking for, and we stand behind everything we sell. But my secret weapon is my friend Shawn Kennedy. He's just a genius when it comes to building custom battery packs, and he knows how to sell them.

What's the hardest part?
People think this is just a car battery place. We do a lot of aggressive advertising, but customers still walk in every day asking for oil changes [which aren't offered]. They're amazed at what we have. We can build almost anything. In construction, a replacement battery for a drill can cost almost as much as buying a new drill. We can build a new one for half the cost. It costs an arm and a leg to replace those dog collars for electric fences. We can open those up and change the battery, no problem.

Are you OK with getting orders from the franchisor?
We used to not be open on Sundays, and then corporate said all stores had to be open on Sunday. Lots of people who own stores were not happy about that. But looking at how much money we make on Sundays, it just doesn't make sense to close. It does bother you, but I'm a brand-new owner. They're not always right--but the majority of time they are.