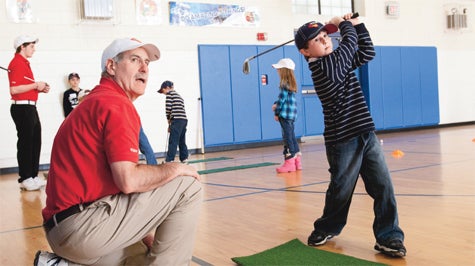 Eighteen months into an anything-but-sure venture, Joshua Jacobs' gut told him he was doing the right thing.

"We knew we had something," Jacobs says, then adds quickly, "We were bleeding money."

That seems the epitome of crazy, but so was the concept: teaching golf to children after school, on school grounds--in the gym, in the hallway. At first, principals and other administrators didn't get it. But once they were convinced--the 60-page student handbook with math, history and English lessons helped--and allowed TGA Premier Junior Golf to offer classes, parents got it, too.

And so did the kids, who love the differently colored class levels (think karate belts). TGA got into six Los Angeles-area schools in 2003 and was in a dozen more within 18 months. Jacobs, TGA's president and CEO, and Steve Tanner, COO and national program director, had proven that the model not only worked, but was self-sustaining. Then something interesting happened.

"We started getting calls," Jacobs says. "We had a new concept: to provide a business-ownership opportunity for people to grow the game of golf and earn a living."

The first franchisees signed up in 2005. While new franchisees can get up and running for about $18,000 plus about $10,000 in cash flow--vital, Tanner says--the pair burned through $250,000 in equipment, props, insurance and labor to start.

Looking back, Jacobs and Tanner realize this figure is far higher than it needed to be, but they've put that hard-won knowledge to good use for their franchisees. They created a brand bible, and they make sure their new people don't purchase any more than is absolutely needed to run the classes.

The recession sand trap
When the economy turned sour, the whole golf industry took a hit. Instead of panicking, Jacobs and Tanner hunkered down with a survive-and-thrive strategy. "We spent the last 12 to 18 months growing our existing franchise system," Jacobs says. "We took the time and money to create a core group of franchises to grow with. We got them strong."

About 60 percent of new franchises in 2010 were organically grown, Tanner says. That strategy kept revenue growth in the 28 percent to 35 percent range, as it's been for the last four years.

As a result, the entire system is strong, and 2011 is all about growth for TGA--not exactly kids' stuff.