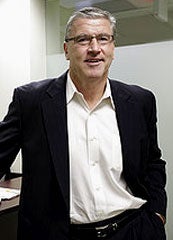 BookKeeping Express was a small company started in California in 1984. Through licensing it grew to more than 150 locations by the mid-'90s before shrinking back down to zero locations and 33 licensees. The company probably would have fallen into obscurity after that--if not for Greg Jones.

Jones is an unlikely serial entrepreneur, a former Penn State football captain who initially had his sights set on the NFL after college. But after a year, he "got serious about joining the real world" and started working in the telecom industry. It didn't take long for him to decide he wanted to be his own boss. "I would always envision myself at the top," he says. Turns out the best way to get there was to start a company himself.

In fact, Jones started and sold several companies over the years, in industries as diverse as cost-management reduction and real estate. Then he and his partners discovered BookKeeping Express. Sensing something special in the brand, they bought the company in 2007, moved it to McLean, Va., and began franchising in 2008. By the end of 2010 they had 22 franchisees, with plans to at least double that number in 2011.

What drew you to this concept?
There was no national organization out there for small businesses to go to for outsourced bookkeeping and accounting. It really rang my bell, because I've been there. I've been that business owner trying to do it all myself or find help from people who aren't necessarily qualified.

Why didn't such an organization exist already?
I don't know. They do exist elsewhere--Europe, Australia, Canada. And if it's worked there, why couldn't it work here in the U.S., where there are so many more small businesses to help? I think one problem is that people look at bookkeeping as a boring business.

So what do you do to overcome that perception?
Well, it's only boring if you let it be. We're not doing old-school bookkeeping. We've built our business model on technology. It's all about creating a paperless system for our clients and doing as much as we can virtually. We also opened our BookKeeping Express Service Center last year in Boise, Idaho, that can act as the back office for any of our franchisees. This opens our recruitment up to people who are more interested in sales and business development than in doing the actual bookkeeping services or building a staff. They can be proactive and get out into the community--in fact, they have to. You can't sit behind a desk and wait for people to walk in the door in this business.

When you bought the business, it was a licensing model. Why switch to franchising?
I knew franchising. I had helped develop franchise concepts, and I've been a Five Guys Burgers and Fries franchisee since 2005, with two restaurants open and a third one opening by the end of this year. If you find the right brand, the right concept, franchising brings a whole different level to the business that licensing can't. Having been on both the franchisee side and the franchisor side, I know the benefits a franchise system can bring an entrepreneur, and that's really what we're in business for--to help entrepreneurs build a business.