The Chocolate Martini Bar was a hit in Buffalo--but how would it play in Cleveland? The high drama of being a first franchisee

By Jason Daley
March 12, 2010
This story appears in the April 2010 issue of Entrepreneur. Subscribe » 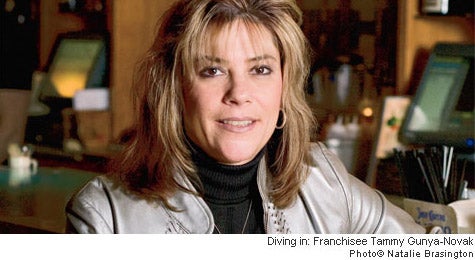 Taking a local business and scaling it up to a national franchise is a stressful, risky, even ill-advised venture for many entrepreneurs. Being the first franchisee of an unproven concept? That's the definition of foolhardy. But Joe Novak, Tammy Gunya-Novak and their partner Dominic Fanelli were so impressed by the wildly popular Chocolate Martini Bar in Buffalo, N.Y., they were willing to become the franchise's guinea pig to bring the concept to their hometown of Cleveland.

Gunya-Novak was smitten by Bill Panzica's restaurant, which stays open late and serves entrees, 25 to 30 desserts and 23 martinis described as dessert in a glass. "Where else can you get a sundae at 1 in the morning?" she asks. "We liked this concept so much--if Bill was going to franchise, we wanted to be the first."

The build-out had its share of ups and downs, but the result hasn't been disastrous, to say the least. The bar, in the Hyatt hotel in Cleveland's entertainment district, had the city buzzing even before the grand opening. After just a month, it was serving 300 to 400 customers a day, with a full house most nights.

The process--from signing the franchise agreement in August to opening the doors four months later--was a learning experience for Panzica and his freshman franchisees. And with deals close for Chocolate Martini Bars on the East Coast and in Chicago, the concept seems to be taking flight. We spoke to both sides to find out what it's like jumping head first into a new franchise.

What's appealing about this concept?
Tammy: We had a nightcap in the Buffalo Chocolate Martini Bar a couple years ago and couldn't help but notice the volume of people coming in. The martinis they were serving were so delicious and the choices on the menu were things you couldn't get anywhere else. We thought about doing something similar ourselves, but why gamble? With the franchise, we get proven recipes. The trial and error of coming up with a menu would have been more expensive and taken more time, for sure. And we were novices--we knew Bill would guide us through.

Any major bumps in the road?
Tammy: We didn't know what we were getting into. If we did it again, we'd take Bill's advice and get a general contractor.

Bill: I think they probably lost $100,000 and opened two or three months later than they would have if they'd hired a professional contractor. I was concerned that they were going to try to do things that weren't within my guidelines to save money, so we were on them constantly to make sure things were built right.

Any other problems?
Tammy: Bill had us go to Buffalo for training, but it wasn't very effective. The Cleveland site has a big party room, and we're always booking back-to-back parties. Buffalo is much smaller, and it's so busy it was hard for people to train us.

Bill: They weren't learning what they needed to in Buffalo, so I brought the whole staff to Cleveland--two bartenders, a chef, a server, a host, a plater--and taught them every aspect on site. It cost $12,000 to bring employees there, but when I left, I felt we did every single thing we could do to train them.

Bill, what did all this teach you?
We had to create a policy and procedures manual--something a lot of small businesses don't have. It's 300 pages and covers every aspect of the business, from how food is plated to how to answer the phone. It's such a valuable tool. Also, the chef we hired in Cleveland is phenomenal. He showed our Buffalo chefs quite a few ways of doing things better. Back in Buffalo, we've completely rebuilt our line and the way the kitchen is run.

Tammy, any advice for Bill?
I wouldn't advise Bill to do anything differently, other than take our experiences and evaluate them. Sure, there were some differences of opinion and concerns about who would have the last say. But looking back at what we accomplished in such a short time frame, we pulled off some miracles. Our location is a gold mine, and we're definitely going to make some money.