If you're thinking about ditching the corporate world for a franchise, author Mitchell York has the reality check you need.

By Julie Moline
October 8, 2009
Opinions expressed by Entrepreneur contributors are their own. 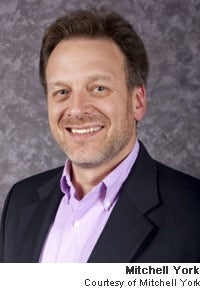 Like many people, Mitchell York got caught up in the economic maelstrom that followed 9/11, and was laid off from his job as the publisher of a technology magazine at the end of 2001. It was the last full-time job he would ever have.

After 20-plus years as an editor and publishing executive, he was more than ready to exchange a closet full of suits for Hawaiian shirts and khakis. By spring 2002, he had started two new businesses: a coffee and smoothie franchise and an executive coaching practice. Both are now thriving, but it was his experience as a newbie franchisee--physically exhausted, emotionally overwhelmed and haunted by doubt--that makes his book, Franchise: Freedom or Fantasy, such a compelling read. It is a frank, powerfully written, eminently practical guide for any real or aspiring C-level type who ever fantasized about ditching the corporate world for the life of an entrepreneur.

What inspired you to write the book, long after your career as a journalist?
I work with a lot of people who are considering doing what I did--leave an executive job to start a small business--and I realized that a lot of them were going through the same things I went through--the same emotions, the same fears, the same cluelessness. I realized pretty late in the game that I started my business for the wrong reasons. I never determined my readiness; I never really analyzed my rationale. In hindsight what I needed was to have developed a methodology before launching out.

That's what the book will help readers do--go through the same step-by-step process I use with my coaching clients. The first thing to determine is whether business ownership is the right thing for them, and then whether a franchise is the right kind of business.

You spend a lot of time talking about what would-be entrepreneurs are in for. You're not writing as an advocate of becoming a franchisee after a corporate job--if anything, you're a relentless naysayer. And you don't pull any punches.
Well, brutal honesty is called for. A lot of people who go into business after a corporate job do it because they're burned out, frustrated and bored, and the prospects of looking for another job are too soul-crushing to contemplate.

Not a good reason for starting your own business, you argue.
It's a terrible reason. So I begin by asking clients this: Suppose you could find a great job that pays what you deserve, that gives you satisfaction, and you could transition into the job quickly and efficiently. Would you still want to start a business? And at least half the time the person says, "No, I'd just get another job." When I hear that, I say, "Let's just focus on getting you a great job." The other half is ready to face the reality of starting a business.

But isn't there a big difference between starting your own company and starting a franchise?
There is, but not as much as you'd think. Starting a franchise business is starting your own company. You have to create a corporate entity, such as an LLC; you can't just begin as a freelancer. And you can't just dabble. You have to be fully engaged, which brings up an important point. There' s a real--and pervasive--misunderstanding about franchising: that a franchise is a color-by-number system where you don't have to be a businessperson to be successful, that a franchise is infallible, and that if you start one, you're guaranteed success. People who go into franchising believing that have a really tough time.

Many people think that if you can afford to buy in, you're golden. But you're saying no.
Let's say you buy a Subway restaurant franchise. If you operate one unit, you're going to net somewhere between $30,000 and $50,000 at the end of the year. That's not very much money for someone used to making an executive salary. The way you make money with Subway--or any franchise for that matter--is to own multiple units. You've got to be a very sophisticated businessperson to have five or 10 stores--and that's where the skills of running a business, hiring and managing staff, creating the right roles for yourself as the owner or the CEO, all come into play. Those are not things that are part of the franchise operator's manual.

The point is that the franchise business takes just as much business sense as any other kind of startup. You have some shortcuts because you have a brand; you have a source of supply and you have some support, depending on the franchise. But it's not a magic way of making enough money to live the lifestyle you really want.

What were the numbers like for you?
My initial investment was about $100,000. Then over the first couple of years I probably invested another $100,000. That's not atypical. It wasn't until the fourth year that I made it all back through cash flow. It's been very profitable ever since. My goal is to make it a million-dollar business in revenue, and I think I'm two to three years from that goal.

Sounds impressive.
Not to many people, especially corporate executives, most of whom scoff at the idea of starting a company just to make a million. I've worked with entrepreneurs who've said, "It takes the same amount of effort to do $100 million as $1 million, so you might as well aim for $100 million." I completely disagree. When this business gets to $1 million in sales, I'll be making much more money than when I was at the highest point in my corporate career--by far.

A lot of people now are leaving corporate careers, for whatever reason, and their primary goal is not to make $1 million or $100 million but to support their families and keep their houses. They're not looking for a killing--they're looking for a decent way to make a living. Which brings up another important point: the stash. I spend a lot of time talking about this in the book. You've got to have the reserves to give yourself a big window of opportunity to succeed if you're going to make any kind of living.

How big a window?
Five years.

That's a big window.
That's a realistic window. I will always advise that you should either develop your reserves before they buy a franchise, or go out and find a well-paying position. The idea isn't just to go through the blood, sweat and tears of starting a business just to get by. You spend your corporate career being a servant to something else. If you are going to go into business for yourself, make sure that it serves you well.

What are the rookie mistakes that you see over and over that are preventable?
People are in too much of a hurry to get going. It's not a race. You have to slow down, and plan very carefully. Don't buy a franchise as a knee-jerk reaction to something that happened--a layoff, a promotion that didn't come, a crappy bonus--at your job.

Besides having a stash of cash, you also need family support, and a network of people, from role models to people whose opinion you value and have your best interests in mind.

Have some entrepreneurial DNA. If someone calls me and never so much as had a lemonade stand when they were a kid, I'd have a hard time recommending that they spend $100,000 plus the opportunity cost of their time to start a business.

Be patient. Profits will take much longer than you think. A runaway success like Facebook is a rarity. The reality is you have to endure a lot of losses and setbacks and not be stopped by that. Most small businesses run out of money and that's why they close--usually just at the time when they're on the brink of succeeding.